Who can resist marveling at weird and unconventional martial arts from around the world? I know I can’t. Turkish oil wrestling is a perfect example – so don’t look away. 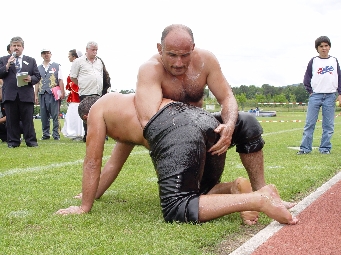 MMA fighters and wrestlers are known for getting up close and personal with their opponents, but even they might wince at how ‘familiar’ turkish wrestlers can get. This is an oiled down, slicked up grab fest where someone ends up with a face full of dirt.

Turkish wrestling, known as Yagli Gures (yaw-luh gresh), first came to my attention while watching an episode of Andrew Zimmern’s Bizarre Worlds. Some of you may know him from his main program Bizarre Foods, but this is an offshoot. Andrew was travelling to Turkey to experience some of the amazing geology and natural wonders of the area, not to mention some of the truly remarkable underground cities. But before going off on any excursions, Zimmern had a date with tight greasy pants.

What is Yagli Gures Exactly?

I had to do some digging, but I found a few interesting tidbits about the history of turkish wrestling. Here is an excerpt from the premier(?) website for Yagli Gures:

“Every year since 1640 Turkey’s best wrestlers – men and boys – have gathered for their national championships on a grassy field near the capitol of the old Ottoman Empire (Edirne). The tournament is called Kirkpinar, or “Forty Springs,” in honor of a 17th Century wrestling legend.

About 1,000 barefoot grapplers compete, oiled up and stripped to the waist. The anything-goes style and the oiled leather trunks originated with the world-renowned Janissaries, an elite fraternity of body guards to the imperial Sultans. The modern stadium is located on the former site of the Sultan’s palace, and Turkey’s president crowns the champions on the final day.

For three days the field is crowded with simultaneous matches in eleven divisions, ranging from school kids to forty-year-old masters. The sun is hot and the fights are long. Only if there is no winner after a half-hour is the mach decided with a sudden death overtime. There are few forbidden holds, and grabbing of trunks is not off limits.

Despite the fierce aggressiveness, however, and the obvious opportunities for fouling, these Turks behave like blood brothers despite their hunger for victory. If one is injured, or gets grass in his eye, for example, it is his opponent who comes to his aid.” – http://www.turkishwrestling.com/

And here is a little bit about the garb and rules of winning:

“The wrestlers, known as pehlivan (from Persian pahlavan, meaning “hero” or “champion”) wear a type of hand-stitched lederhosen called kisbet (sometimes kispet), which were traditionally made of water buffalo hide, but now also of calf leather. They also douse themselves in olive oil.

Unlike Olympic wrestling, oil wrestling matches may be won by achieving an effective hold of the kisbet. Thus, the pehlivan aims to control his opponent by putting his arm through the latter’s kisbet. To win by this move is called paca kazik. Originally, matches had no set duration and could go on for one or two days, until one man was able to establish superiority, but in 1975 the duration was capped at 40 minutes for the baspehlivan and 30 minutes for the pehlivan category. If no winner is determined, another 15 minutes—10 minutes for the pehlivan category—of wrestling ensues, wherein scores are kept to determine the victor.” – Wikipedia

Hold on to your kisbet – here is some video footage of Yagli Gures.

So What Happened to Poor Andrew Zimmern?

Unfortunately I don’t have access to any video clips of Andrew participating in the event. You’ll have to take my word for it when I say it was messy.

First, Zimmern had a heck of a time putting the ‘pants’ on. He had two or three helpers trying to squeeze him in but it was still rough going. When he finally got onto the field, his opponents were gentle but firm in their victories. Judging from Andrew’s reactions, the whole experience must have been difficult and exhausting.

For anyone who has grappled before, you know how quickly the body can get fatiqued from all the pushing, pulling ,and tension. Just imagine that with the added grief of not being able to grip anywhere. Keeping stable and in a dominant position must amount to a ton of used energy.

This is always an interesting question. Clearly, Yagli Dures is played like a sport. There are rules, regulations, penalties, and judges. However, there is also a significant amount of historical pedigree here. As stated in the above information, this wrestling is descended from the military gaurd of various sultans. Furthermore, the techniques applied in Yagli Dures have distinct combat applications (especially in the historical sense). All of that leads me to state comfortably that turkish wrestling could be considered a martial art…an unusual one. I don’t think i’ll be trying it though.