The inagaural USAMA event featured a number of high quality practitioners and special guest instructors, many of whom I had the pleasure to meet and train with. I’d like to share a little of my experience and talk about the interesting people who shared their time with me.

Back in ‘the day’ I attended tournaments fairly regularly but once I got my fill I decided to move my focus and energy elsewhere. As such it has been a number of years since my last competition, with only one or two events sprinkled into the last decade. Despite that I was excited to support my instructors who were attending the USAMA event and the other quality martial artists who I knew would be in attendance.

A week or two ahead of time I decided which weapons and empty hand forms I wanted to try. For some reason I decided to be bold and go for a bo form that I had never demonstrated publicly before. This would prove to be something of a rookie mistake. I practiced the form diligently leading up to the competition and focused on it mentally even when I wasn’t training. I went over it again and again in my head. Unfortunately there’s a point in mental preparation where you can turn focusing-in to psyching-out. I did the latter.

(video of the kata in question, filmed at an earlier date:)

When it came time to compete my nerves were on high alert and I ended up bouncing the bo off of my leg at one point…a mistake that had never happened during my practice. Woops.

I was disappointed, as you might imagine. However the experience immediately burned away all of my extra nerves and reminded me of some of the obvious mistakes in preparation I made. When it came time to do my empty hand kata I had a lot more fun and executed a much better kata.

In the evening I attended a very nice banquet where annual point winners were announced. As this was my first tournament in a long time I was not involved in any point games. However afterward I retired to the bar area with my instructors Bruce and Ann Marie Heilman as well as Jody Paul. 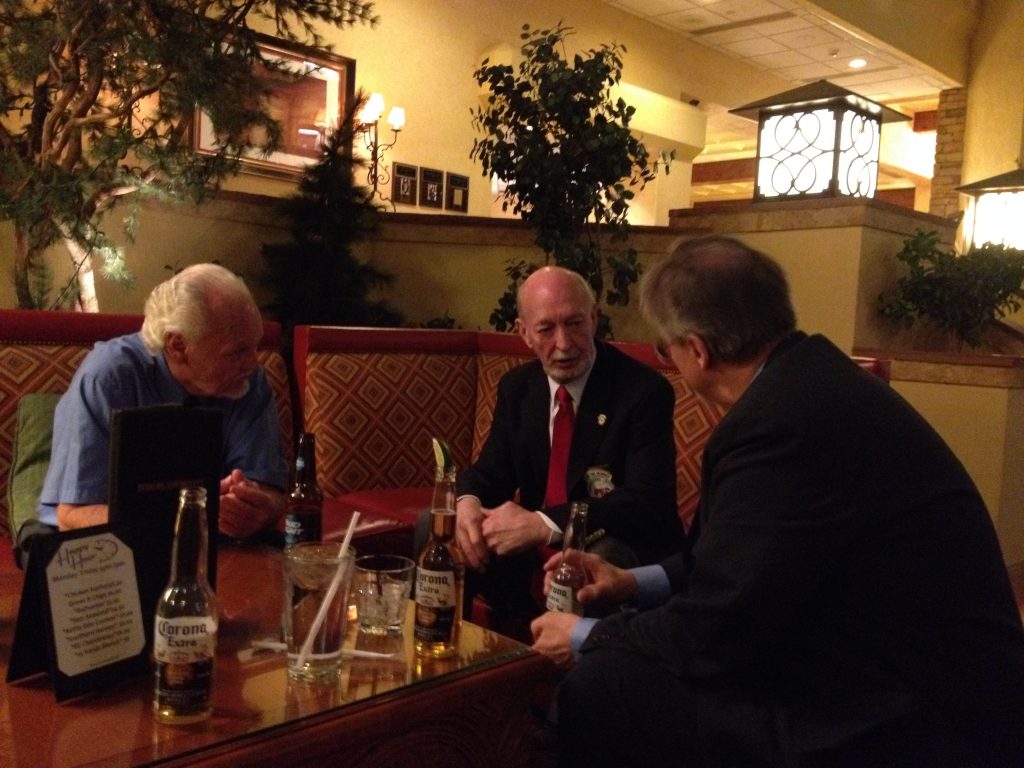 A few minutes later we were joined by Glenn Keeney. For those who might not be familiar, Keeney is one of the senior-most Goju Ryu practitioners in the United States and a competition champion. He is also known for starting the PKC (Professional Karate Commission), the preeminent sanctioning body for kickboxing and karate events.

There must have been some senior rank energy in the room because shortly after we were joined by Bill “Superfoot” Wallace and his student Stephen, as well as Robert Bowles. Bowles Hanshi is one of the senior students of Robert Trias as well an important connection to the old USKA. Bill Wallace is one of the most famous and successful karate competitors of our generation and is known for his unparalleled kicking technique.

All of this came together quickly and I couldn’t have been happier about it.  Not many people realize that Glenn Keeney and Bill Wallace are long time friends and even traveled the country together, visiting schools of all shapes and sizes in order to train and fight. Having them back together and mixed in with all of the other seniors resulted in some great story telling. Happily I was able to meet up again with these individuals a day later for another dinner and chat session. 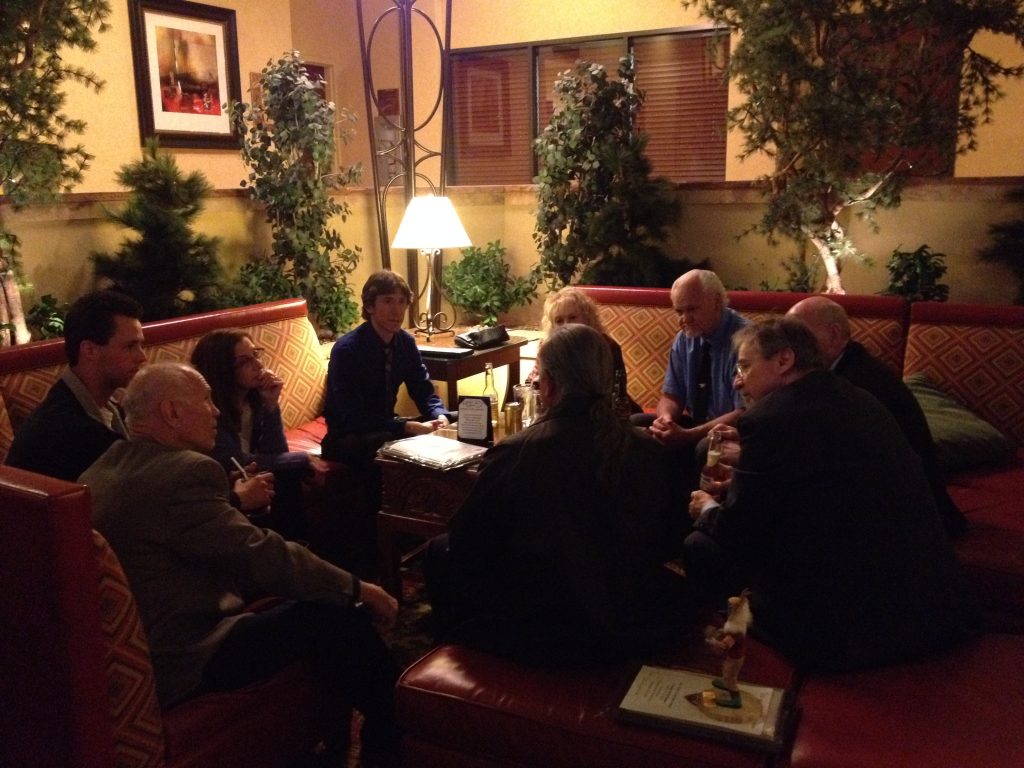 I’ve always maintained that the context in which we train, and our shared history, is second in importance only to training itself. I find long conversations, like the one described here, to be invaluable in the growth and understanding of an art like karate.

A Day of Seminars 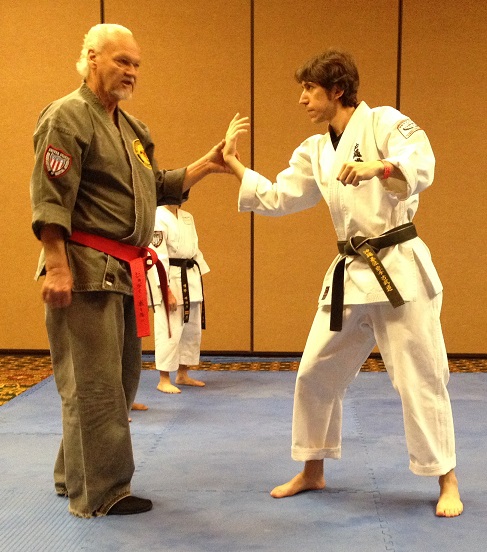 As much fun as I had hanging out with all of those seniors I was even happier to spend the whole next day in training seminars. First I assisted Jody Paul Hanshi in teaching Motobu Udundi techniques. He focused on some of the most fundamental footwork and “dance” that makes the classical joint manipulation of Motobu work.

After that I hustled over to the seminar hosted by Fumio Demura Sensei. In recent years Demura Sensei had experienced some health problems but he was back in gi and able to demonstrate technique. With the help of one of his senior students we practiced a few basic drills and bunkai applications from the kata Pinan Shodan. Demura Sensei ran his class with great spirit – lots of hard work, energy, and effort. 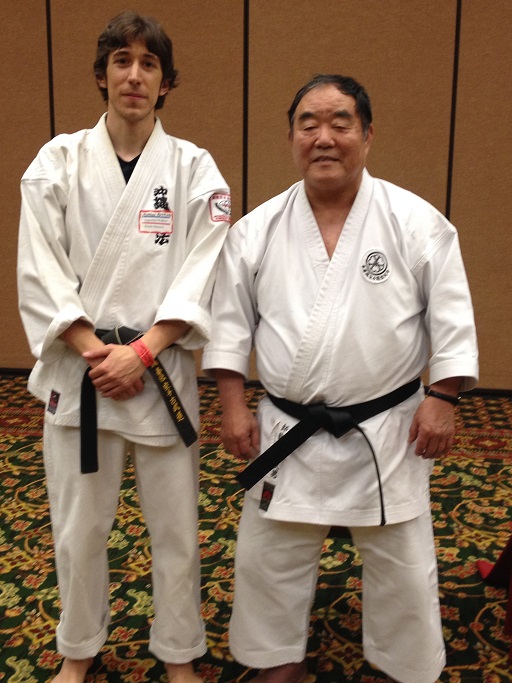 Bill Wallace took over after that for a fast paced three hour session. He guided us through some fantastic stretching and kicking mechanic drills. Wallace Sensei shared some of his proven and effective tactics for fighting and utilizing kicks efficiently. Wallace Sensei is a fantastic teacher and entertainer. Even though we were working hard he kept us motivated and interested in the subject matter. Having him kick me in the head with ease was a true learning experience. After the session I felt some serious jelly-leg effects and would continue to feel it for the next few days.

To wrap up the day I assisted The Heilmans in a classic Okinawa Kenpo bo fighting drill set. We partnered up and worked through the two person set, analyzing the basics of the form as well as some of the finer details that make the methods effective.

Getting a chance to compete, socialize, and train all at one event was a fantastic opportunity. Getting to spend an extended amount of time pestering senior practitioners with questions was a great thrill and worth the trip all on its own.

I congratulate everyone involved in the production of the event and thank them for their effort. Who knows, maybe this will give me the itch to compete again in the near future.