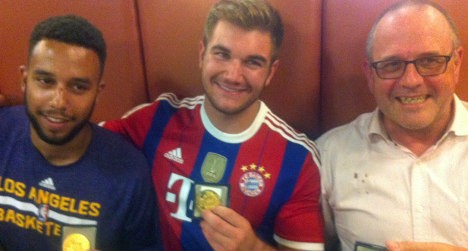 This week in France a worst case scenario unfolded for train passengers. A lone gunman emerged from one of the train car bathrooms with the intent to rob/kill the riders. Luckily, through bravery and strength of teamwork, six individuals were able to thwart the attack.

As reported by CNN:

“The train company, Thalys, said the attack attempt occurred as the high-speed train, heading from Amsterdam to Paris, passed through the Oignies region in Haute Picardie, France. The suspect boarded the train in Belgium, Thalys said.

A French passenger who went to use the toilets in car 12 found himself face-to-face with a man armed with a Kalashnikov rifle that was strapped to his shoulder, Cazeneuve said.

‘The French passenger courageously attempted to overpower him before the aggressor shot the rifle several times,’ Cazeneuve said. One of the rifle shots wounded a French-American passenger seated nearby”.

The commotion between the French passenger and the gunman caught the attention of 51 year old Mark Moogalian. Upon seeing the weapon, Moogalian made the decision to rush the attacker in an attempt to disarm him.

As reported by NBC News:

“Mark Moogalian told his wife to ‘go’ and then ‘rushed towards the gunman to remove … the Kalashnikov.’

She added: ‘I did not see my husband get shot, it happened too quickly and I was pretty much hiding behind seats. But I look at my husband through the seats at an angle and he looked straight at me and said, ‘I’m hit!’ … There was blood everywhere. I ran towards him and I could see that he a wound on his back, I then saw another wound by his neck.'”

After Moogalian’s attempt, three Americans and one British businessman were able to beat, subdue, and disarm the gunman. The Americans were Spencer Stone, Anthony Sadler, and Alek Skarlatos. Stone is a US Air Force member, while Skarlatos is a member of the Oregon National Guard. Sadler is a college student at Sacremento University. The British man, 62 year old Chris Norman, assisting in subduing and restraining the gunman.

The Diversity of Action

Sadler, Skarlatos, and Norman – Three of the individuals who helped subdue the gunman. Image Courtesy of thelocal.fr.

Obviously an incident of this nature can inspire all kinds of debate, ranging from gun control, to terrorism, to the safety of international travel. Those topics, while worthwhile, are not the reason I am covering this event on IkigaiWay (there are better authorities to weigh in on those issues). My takeaway point is this – six people from very different backgrounds with very different skillsets all decided to act.

If you’ve ever studied the psychology of violence, you’ll know just how difficult it is to make yourself act in a situation like that. Pure fear can cause bodily freeze of course, but sneakier factors can also take effect. Normalcy bias can creep in, making you think that if you just act normal, the external factors will return to normal as well. You also have to overcome the bystander effect, wherein every person on the train will wait for someone else to handle the problem. Overcoming these mental freeze points in time to make a difference is no small accomplishment.

In this particular scenario, we have a businessman, a college student, a professor, an undisclosed passenger, and two military members all capable of overcoming their fear. Most, if not all, sustained injury in the process. Cuts from a small knife wielded by the gunman shredded the subduers, even though they outnumbered and outpowered him. The professor was shot; his life saved by one of the military members who applied pressure to the gun wound until help could arrive.

As martial artists, this event can serve as a stark reminder to continue our training and keep our tools sharpened. The only weapons we are guaranteed to have in times of crisis are our hands, feet, and minds. All other self defense means and methods must be built around that foundation.