Tune In as History Repeats Itself – “Never Back Down” MMA Movie

Oook. So what do we have here, exactly? Very slick production. Really, really, ridiculously good looking people. A plot that was likely whipped up over the course of a business brunch. Timely soundtrack. Sensationalized techniques and fight scenes that loosely resemble a popular style (in this case, MMA). Thin excuse to fight, training sequences, cheesy love interest, final fight.

Starting to sound familiar? It should. This is a trap many different kinds of martial arts have fallen into. Let’s warp back in time.

In the late 40’s, early 50’s, karate was hitting U.S. shores for the first time. Individuals like Robert Trias brought it back from military exploits overseas. The abilities of Trias Sensei and other visiting masters impressed onlookers, even though it was still an underground style. By the 70’s, karate was hitting the U.S. on a consistent basis and began developing a healthy reputation.

Concurrently, kung fu had begun its journey west roughly around the same time. Much like karate, it began spreading in the late 40s, early 50s, but didn’t truly pick up steam until the 70s. That’s when American cinema took notice of these blossoming martial arts. They saw the respect these styles commanded and the amount of money Americans were shelling out to train with instructors (both legitimately qualified, and otherwise). With this revelation in hand, the karate and kung fu movie creation machine began churning.

Dozens upon dozens of hong kong flicks were brought over, sensationalizing the exploits of wushu masters. Characters were given the ability to fly, project ki, and execute lethal death blows. Karate masters were portrayed as men of unfathomable strength, able to handle droves of opponents.

This all came to a head as Americans found stars upon which they could base their martial arts universe. Bruce Lee and Chuck Norris were among the first. Later came Jean Claude Van Damme, Steven Seagal, and Jackie Chan.

Often found fueling the movies of these stars (And others) were plots of underdog training, revenge, redemption, and tournament style combat. 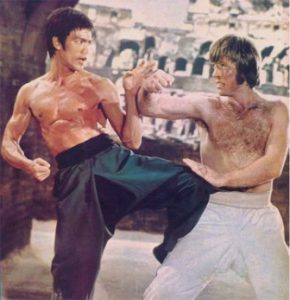 Now…like a lot of folks…I love these movies! Absolutely. A lot of these men are/were fantastic martial artists and the movies are very entertaining. But if we take an honest look at what happened to karate and kung fu after the flooding of the movie market, we can see a definite trend. Teachers started popping up all over the place, claiming they knew karate simply because they watched bloodsport 50 times. Other teachers claimed they could perform inhuman acts of strength, such as ripping off strips of human flesh. Still others held on to the belief that they could perform no touch knockouts simply through chi blasts.

These wayward martial artists were not following in the footsteps of traditional Okinawans, I can promise you that.

Beyond conning people for money, these trends also served to deteriorate the reputations of karate and kung fu. After all, if you meet 4 hokie karateka, you’ll probably expect the 5th to be hokie too.

This historical detour brings us back to our current topic – Never Back Down. The development of MMA has been historically similar to that of previous styles in that it began underground, grew a reputation of toughness, and expanded out globally in order to prove its effectiveness.

Here, in the form of Never Back Down, we are seeing the next phase. Hollywood has spotted a very profitable martial art and is succeeding in cashing in on it. They have sensationalized the style just like has occurred in the past, and they even followed up with the standard plot line of revenge, redemption, and tournament style fighting (see bloodsport, american samurai, kickboxer, lionheart, enter the dragon, the karate kid, etc. etc. etc.)

Unfortunately, that’s not the worst of it. Movies from prior decades like The Karate Kid and Enter the Dragon tried to instill a carefully crafted message. The Karate Kid attempted to show the virtues of karate in the form of a wise Mr. Miyagi. Miyagi showed restraint, wise-judgment, and an aversion to violence. Can the same be said for Never Back Down, and the handful of cliched lines it espouses? The same kind of comparison can be made in regards to Bruce Lee’s genuine martial genius.

Of course, it’s not really fair for me to compare this movie to two very good ones. But Never Back Down chose to use the prettiest people and the most shallow message it could manage, instead of choosing a more responsible path.

I don’t need to spray paint it on the wall – I believe that if MMA keeps going in this direction (especially when combined with the pro-wrestling antics of EliteXC), it is going to suffer the same decline that damaged those styles that have come before it. Ultimately, it will be replaced by something new; something that represents the toughness and “realness” that MMA once embodied.

From a traditionalist who also appreciates what MMA could represent.