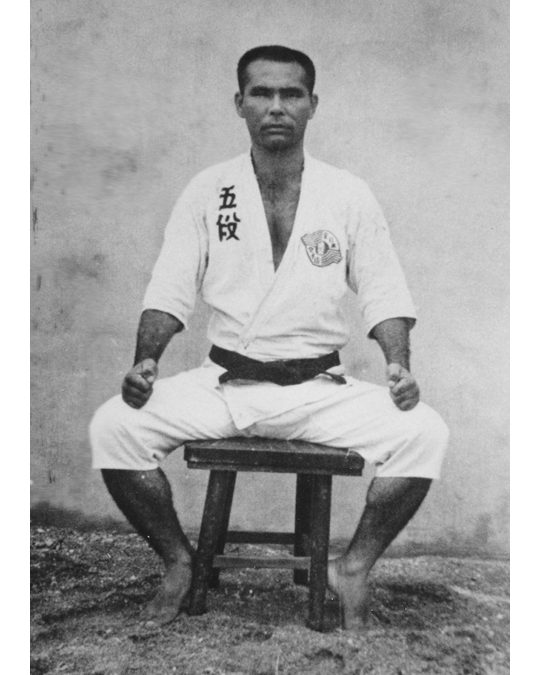 The karate world has lost a true luminary and keeper of the old ways. Oyata Seiyu (Title: Taika), 10th Dan of Ryu Te, passed away in Aberdeen, South Dakota this week.

The following is a detailed clip from the Kansas Star Obituary:

He was born on Oct. 19, 1928 in Kita- Daito of the Ryukyu Islands, located 200 miles east of Okinawa, Japan. He was educated in Osaka, Japan, and then returned to his native Okinawa after World War II.

Oyata Sensei's exact age is subject to some speculation, reported alternatively as 1928 or 1930.

This loss comes on the heels of the passing of Jim Logue, one of Oyata's senior students.

Oyata Sensei was integral in the transmission of old style karate to the United States and eventually the world. He was one of a scant few Okinawans both knowledgeable and willing enough to share some of the more subtle aspects of complete karate life protection. He served as an extremely important catalyst in the broader understanding of concepts like tuite and kyusho.

Despite his reputation Oyata Sensei may actually be underappreciated for how unique his story is, starting with an ancestral line that stems back to the bold martyr Janna Teido Oyakata. Janna was a councilor to King Sho Nei during the fated "Satsuma Era" of Okinawan history. Janna was Pro-Chinese/Anti-Japanese and often voiced his opinions on the matter of trade and fealty. More than once he convinced his king to shirk the heavy tributes demanded by the Japanese. 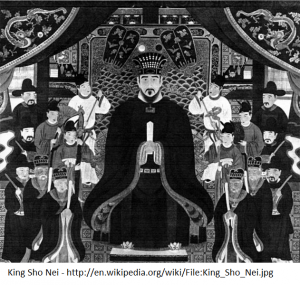 In 1609, when the Satsuma Samurai successfully invaded the Ryukyu Islands, Janna was taken with King Sho Nei as a captive. Whisked back to Japan, Sho Nei was forced to sign documents acknowledging Japan as the rightful and historic owner of all things Ryukyu. He was also forced to sign an apology for his malfeasance in neglecting the Japanese tributes.

The king signed the documents dutifully, but Janna refused. He knew that the Japanese had no real historical claim on the Ryukyus and that the demanded tributes were baseless and greedy. Unfortunately, his obstinance led to a quick demise as the Samurai disposed of him on the spot.

At first, many Okinawans believed Janna's disobedience caused them excessive trouble and harm (an idea which the Japanese gladly cultivated). However, as time passed and historical evidence of the invasion came out, the truth of Janna's patriotism was revealed and he became a revered figure.

After the Satsuma invasion the Janna family lost their name in shame and were referred to instead as Sinda (death). This later changed to Ikemiyagusoku, and changed once again some years later to Oyata (source: John Sells, 2000).

One of a Kind Training

Oyata Sensei's own story was almost ended before it truly began. At age 15 he was drafted into the Japanese Imperial Navy during World War II. He was slated to be a Kaiten Pilot, which was a manned torpedo used in suicide runs. Fortunately he was captured by Allied forces before being deployed for the first and last time.

His detainment ended roughly two years later, allowing him to return home to Okinawa. It was upon his return that his life as a karateka would begin in a most unusual way.

Jim Logue told the story during his 2010 interview:

After WWII, Oyata sensei worked for the US Army delivering food and supplies to the outer islands on the east coast of Okinawa.  He traveled to six different islands using an amphibious vehicle visiting an island each day.  His route took him through the seaside town of Teruma where he noticed an old man groveling for fish in small pockets of the coral reef during low tide.  This man was very unusual because he still wore a warrior’s top knot.

After asking some of the local villagers, Oyata sensei found that this was Uhugushiku, a retired warrior whose family had a long relation to the nobility of Okinawa.  Since his job was dangerous, he thought that maybe, this man could teach him some martial arts that he could use should he be robbed of his supplies.  Although he had received martial arts training in the military, there was no in-depth study.

He befriended Uhugushiku by offering to take him to the deeper waters in his amphibious vehicle to catch bigger fish.  After learning that Oyata Sensei’s ancestors were also from the warrior class, Uhugushiku agreed to teach him.

The Uhugushiku family was noted for their skills in weapons and Oyata’s sensei’s first lessons consisted of learning the bo.  He eventually learned many weapons from Uhugushiku in addition the the bo; sai, kama, nunchaku, jo, Tonfa, chizikun bo, tan bo, manji sai, surichin and nunti bo.  He was taught kata, concepts and fighting techniques.  There were also discussions about history, language and culture so the he could better understand the arts of life-protection.

Uhugushiku also introduced Oyata Sensei to Wakinaguri, a large man of Chinese decent.  Wakinaguri’s family dates back to the original 36 families sent to Okinawa as emissaries.  Wakinaguri was the 6th generation to receive his family art and having no immediate family, he agreed to teach the young Oyata.

Lessons with Wakinaguri consisted of concepts and principles rather than repetition of drills.  He learned how to make technique more effective and how to use this knowledge to read kata and decipher the code hidden within.  As part of his training, Uhugushiku introduced him to the family scroll, much like the bubishi, but in greater detail.  This scroll is more than 20 feet in length and contains 100’s of pictures depicting many techniques and concepts.  Just before Wakinaguri’s death, Oyata sensei was presented with a copy of this scroll that he continues to use today for continued study. 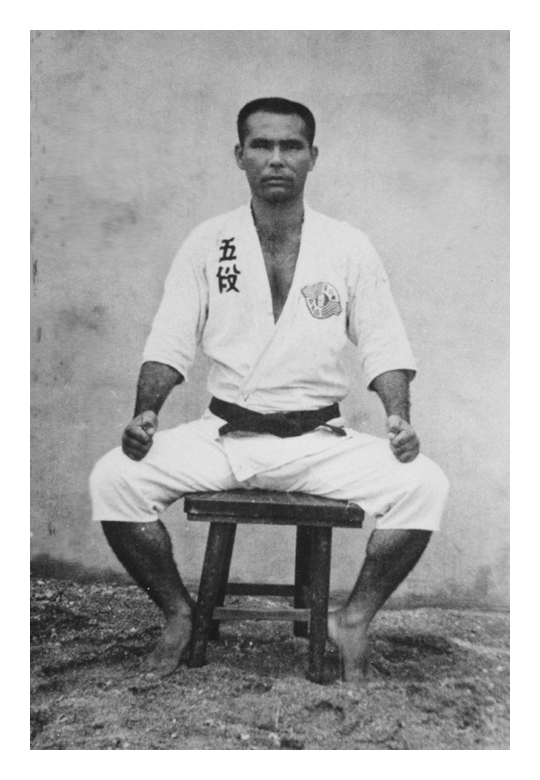 Uhugushiku Sensei died in 1950, prompting Oyata to branch out in his martial explorations. Having a strong base in the Chinese aspects of karate, Oyata desired a teacher who was both knowledgeable and "rough". His search led him to Nakamura Shigeru of Okinawa Kenpo.

Nakamura Sensei had a broad mixture of experience, ranging from formal Shuri Te of Itosu/Chomo/Yabu, to Tomari Te of Motobu Choki, to the Chinese arts of Kuniyoshi Shinkichi. Nakamura was able to provide a strong basis in kata and fighting for Oyata. In addition, Oyata had the opportunity to train under and alongside other highly skilled members of the Okinawa Kenpo Renmei. He spent time with Uehara Seikichi of Motobu Udundi, Toma Shian of Seidokan, and Odo Seikichi of Okinawa Kenpo. Each had noteworthy strengths in tuite, striking, weapons work, etc.

Oyata's early experiences with Uhugushiko and Wakinaguri, combined with his days in Okinawa Kenpo, resulted in a wonderfully unique and effective art.

Oyata Sensei's first arranged visit to the United States came in 1968, but it wasn't until 1977 that training in the U.S. picked up steam. Oyata Sensei ended up moving to the states full time in order to guide his quickly growing western contigent.

In order to avoid confusion and any political complications, Oyata Sensei opted to call his particular brand of karate Ryukyu Kempo. It was a term that encompassed the broad essence of Okinawan fighting arts while still being distinct. Unfortunately, as time passed other martial artists decided to use the name "Ryukyu Kempo"  in order to simulate a connection to Oyata, even if it was as thin as meeting him during training seminars.

Realizing the problem at hand and the lack of effective legal recourse, Oyata Sensei opted to changed the name of his style to Ryu Te, combining the first kanji character from Ryu-kyu and the last from kara-te. This time Oyata Sensei sealed the name legally, protecting it from excessive misuse.

At a time when American karate was experiencing something of a rut, Oyata Sensei revealed exciting and effective aspects that many westerners were unfamiliar with. His ability to apply punishing tuite techniques and extremely fast kyusho knockouts caught the attention of many martial artists who were becoming disenfranchised with the relatively thin or incomplete training they were receiving.

Oyata Sensei's expertise has been mimed and faked by many martial artists looking to capture just a bit of his mystique. This is unfortunate. But luckily there are many high quality direct students that truly carry on the way of Oyata Sensei's art. These skilled men and women are part of a fantastic lineage of karate and we are all richer for their efforts to carry on Oyata Sensei's dream.