Top 10 Things Not to Stress About in Martial Arts

Here is something I say with confidence – martial arts can be unnerving!  It’s not all butt kicking and black belts, after all.  While I’m no master, I HAVE experienced (and seen others experience) a few common concerns that seem to crop up during martial arts training.  Have a read through these top 10 stressors, and hopefully, I can help you shrug a little weight off your shoulders.

This first one is more common than you might think. There are always a few individuals who can pick up kata or technique very quickly. While that’s fortunate for them, it can leave a residue of anxiety in other students. People who have an ingrained self consciousness about their own progress will pay special attention to students who pick things up quickly, allowing themselves to feel discouraged when they can’t do the same.

I think we all suffer from this at one point or another. It’s just like in Karate Kid:

“Daniel: Hey – you ever get into fights when you were a kid?
Miyagi: Huh – plenty.
Daniel: Yeah, but it wasn’t like the problem I have, right?
Miyagi: Why? Fighting fighting. Same same.
Daniel: Yeah, but you knew karate.
Miyagi: Someone always know more.”

What a great movie. And it also helps prove my point – no matter how awesome you are, there is always someone better. So, with that inevitability in mind, just focus on your own personal progress and forget the comparisons!

Final thought about #10: karate is a lifelong endeavor. If you stay in the martial arts while others come and go, I guarantee you’ll make it to the head of the class.

9. Keeping Up With the Joneses

This is connected to #10.  In keeping up with the Joneses, which of course means trying to outdo your “neighbor”, trying to learn a lot quickly can cause even more stress.  You’ll see kids do this a lot:

Annoying when kids do it, but forgivable. Extremely annoying when adults do it. And they do do it. If this happens to you, try to let it roll off your shoulders and remember the long term benefits of training.

If you’re the one prodding at your classmates…knock it off.

This same concept applies to physical possessions as well. Weapons, uniforms, books, dvds…that whole business gets rapped into the martial arts very easily. Don’t feel compelled to spend money because everyone else does.

You’re gonna look and feel stupid from time to time. Keep asking questions and participating. Seriously. This is the best way to learn, hands down.

As far as I am concerned, there is no good reason for your uniform to look like the flair guy’s getup from OfficeSpace.

I understand some patches, but things can get a little out of hand.  If you find yourself creating a patchwork out of you or your child’s gi, just take a step back.  Remember, all of these external distractions can take away from the internal goals of the martial arts.  Let your personality and ability make you stand out, not eye catching gi accessories.

Have you seen Kill Bill?  Do you remember the five point palm exploding heart technique?  That was pretty cool.  Unfortunately, some people can get overly caught up in that razzle dazzle when pursuing the martial arts.

Kyusho, or vital point striking, is experiencing a bit of a boom in popularity.  When done correctly, the results can be very deadly indeed.  This has led a lot of people to worry about the deadliness of whatever technique they are practicing.  So much so, in fact, that some students try to learn vital point strikes off of video tapes or from snake-oil instructors who claim to have mastered them.

Don’t get too caught up in this hype.  The truth is, most karate styles have kyusho integrated into them already.  The trick to unlocking the techniques is a matter of becoming an expert at fundamentals. As Sensei Bill Hayes says, become “brilliant at the basics.”  After that is achieved, kyusho can slowly start to seep its way into your training.  Don’t rush this one. 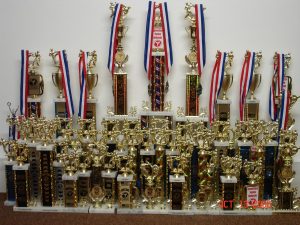 This Can Be Yours if The Price is Right!

Time + money = a ton of trophies.  Yes, it helps if you’re good, but its not a mandatory prerequisite.  There are so many tournaments with so many divisions that sometimes you’ll be lucky to get three people in your division.

If you want to, acquire a couple of trophies to prove to yourself that you can do it.  After that, put that money and mental focus to better use.

This is one that yours-truly had to work on. For awhile, I was very concerned about my kata portfolio.  I wanted to learn a whole lot of kata and I wanted to learn them all very well.  Unfortunately, what I REALLY wanted was to have my cake and eat it to.

Take it from me, don’t worry about slowing yourself down to learn fewer kata.  Much like #10, learning quickly, pacing your kata intake shouldn’t be perceived as a bad thing.  This is especially true after black belt.

In many martial arts, there are certain requirements as you progress through kyu ranks.  Once you hit black belt, you are “ready to begin learning”, and that means taking charge of your martial destiny.  It’s easy to ride the kata train, going for higher and higher material.  But, ultimately, it might leave all of your material a little soft.

Can’t kick the ceiling?  Can’t do a triple blackflip into a split with kiai?  Don’t stress.

A lot of the acrobatics and physically impressive maneuvers you see today are not really part of traditional martial arts.  In fact, it was extremely rare for the old Okinawan Karate Sensei to kick above their waist!

Listen to what your body can and can’t do, then try to make small improvements from there.  Listening to the natural rhythym of your body will result in much better technique than trying to force Van Damme style kicks.

Martial arts tend to have self defense at their core.  Some styles are for aggressive fighting, while others are for flowing defense.  But, ultimately, you should learn how to fight.

Where people tend to get tense is when they don’t see dramatic results immediately.  This is especially true for traditional arts.  Styles like boxing and MMA can show initial progress pretty quickly, which is nice.  Unfortunately, old styles were designed for the long haul.

Traditional martial art basics can actually hinder your fighting ability for awhile.  They make you mechanical, and force movements into your body that you aren’t used to.  It isn’t until years of practice sink in that you can begin to feel those movements naturally.  Once they start to become natural though, it’s a real treat.

Rank is very valuable, and very dangerous.  It helps motivate us to achieve, and symbolizes skill and experience.  Unfortunately, rank can also be a business. Stripes, colors, and titles are abound these days.

No matter how your school addresses rank, don’t feel driven by it, in and of itself.  If you are a green belt, but have focused on improving your basics, your self defense, and your mindset, you’ll be on your way to achieving real results.

Navigating through these troubles, and a forest of others, is essential when pursuing the martial way. 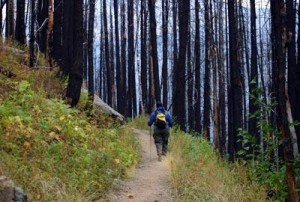 I’ll meet you somewhere in the woods, and maybe we can give each other a hand 😉