The Two Spirits of Kobudo

One  staple of a good movie fight scene is a hero or villain working their way through a myriad of weapons. They might start off with knife, but that will get kicked out of their hand, leaving them defenseless until they grab a nearby pool cue. Once that breaks they eventually find their way to a chair, and so on.

You’ll find this classic situation popping up in all kinds of martial arts movies. Take this scene from Bruce Lee’s “Enter the Dragon”:

In a mere three minutes we are treated to Bruce’s skill in open hand fighting, bo, escrima style sticks, and nunchaku.

Most of the time this is done just to keep the audience interested. However, the idea of being able to use multiple weapons effectively is intriguing and warrants a little deeper investigation.

When discussing the use of a weapon, I generally break things down into two “spirits”: the spirit of kobudo combat, and the spirit of the weapon itself. Each are equally important when endeavoring to maximize your ability to utilize tools as a means of enhanced life protection.

The Spirit of Kobudo Combat

When fighting with weapons (especially against other weapons) damage can accrue quickly. Certainly empty hand fighting can be lethal, but adding the force and physics of a weapon increases the likelihood of being mortally injured. Bearing that in mind the spirit of kobudo combat must always be one of a brief and fatal meeting.

As such there are certain matters that require special attention to achieve success. Stancing must be used in a manner that reveals as few targets as possible to the opponent, even if it means narrowing traditional stances. Centerline control must be so precise that there is only a razor’s edge allowance for error.

The need for control of distance and timing in kobudo is paramount as opportunity occurs in a moment’s notice. Nowhere is the idea of ichigo ichie more apparent.

Understanding the spirit of kobudo combat means building a solid foundation of principle and concept.

The Spirit of the Weapon Itself

Although all weapons share commonalities in fighting, each also has it’s own unique set of strengths and weaknesses. Understanding how best to use the weapon means understanding the spirit of the weapon itself. 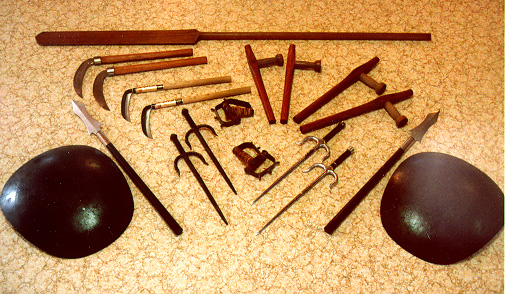 An Array of Weapons From Okinawa Kenpo

Long range implements are capable of different tactics than short range ones, which can be broken down further into wooden weapons vs metal weapons, bladed vs non-bladed, and so on. Properly assessing these capabilities will allow you to stay within your zones or strength while avoiding zones of weakness.

Just as an example of analyzing each weapon for its own unique qualities, consider the kama. The kama is weak when it comes to long range. A bo user can keep a kama user at bay and outside of the kama’s effective fighting distance. However, the kama’s unique hooking ability can control, manipulate and ensnare an opponent’s weapons or body parts in order to force a closure of distance and quickly dismantle vulnerable and hard-to-access parts of the body.

The winner in any match is determined by whomever is in better command of themselves and their weapon.

Open Hand / Weapons Separate and as One

I’ve come to believe that the spirit of kobudo is the same as the spirit of karate, with very minimal differences. The importance of centerline, distance, timing, kiai, kokoro, etc. are all present in both methods of life protection. The emphasis and execution will vary, but both systems will ultimately augment each other and spur on a practitioner’s growth as a complete artist.

An example – in sparring we often find it acceptable to take a few blows knowing that we can bounce back and try again. In weapons combat it becomes intensely obvious that a single mistake will result in real life injury. This is an excellent mindset to transfer to self defense. Conversely, training in empty hand can teach us how to move the body quickly and utilize all eight of our attached weapons (hands, feet, knees, elbows) even when one or more weapon is occupied. This resiliency and creativity can be lost when using a single weapon all the time.

As such, kobudo is both exclusive and inclusive in the realm of martial arts.