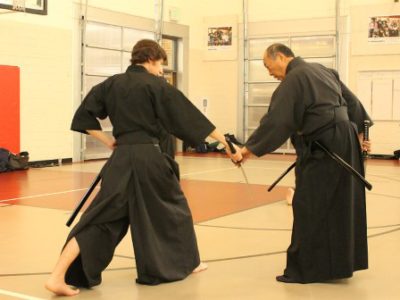 I recently attended a training seminar with two very well respected, highly skilled kenjutsu practitioners. Despite a taxing travel schedule they were both very giving with their instruction and I certainly took away a few things to think about.

For a quick introduction to each instructor, view the short videos below:

The seminar itself was broken up into two major parts. The first consisted of Kishimoto Sensei sharing some of his philosophy on training as well as exploring connections between iaido and kendo. The second part involved Seitei Waza demonstration, instruction, and correction.

Kishimoto Sensei imparted many ideas of interest, one of which caught my attention in particular which I would like to share today. He described the three levels of visualization one can achieve during iaido training.

Exploring the Three Levels of Visualization

Visualization is extremely important in iaido. After all, the art consists of drawing and cutting in thin air (or at worst against rolled up tatami). Unlike kendo there is no fierce opponent screaming and leaping at you. It is up to the practitioner’s imagination to create an opponent upon which to execute technique. This may sound easy, but while striving for technical competence in iaido even getting started with visualization can be a daunting task. Kishimoto Sensei expressed visualization progression in the following manner*:

All practitioners start at level 1 when beginning training. I should say, once the iaidoka learns how not to fall down and hurt themselves, they then begin at level 1. A level 1 ‘opponent’ barely exists in the mind of the practitioner and only performs simple maneuvers. The imaginary antagonist will fail to preempt even the most sloppy and slow of draws. He/she will succumb to any wobbly strike and will be thoroughly blocked during any and all counter attack attempts. A level 1 opponent only attacks when our block is ready and moves conveniently into range for all strikes to land flush. 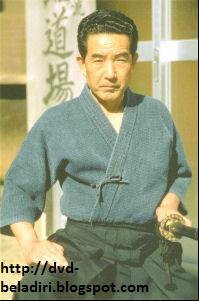 Once the basics of iaido waza are executed competently (which can take a long time) the practitioner is free to think more clearly about their opponent and their own body movement. It is at this time that ‘reality’ starts to kick in. The practitioner can begin to understand why their instructor has been making so many subtle corrections. Excessive movement can give away intention (just like in the video above with Kishimoto Sensei). Poor body posture can lead to weak cuts that wouldn’t slice through clothing let alone bone. Improper foot movement can leave the opponent out of optimal range. At level 2, the practitioner can instill concepts that they now understand into the opponent, and thus can make personal adjustments with educated intent. At this level an iaidoka will know when mistakes and flaws would have resulted in dueling failure.

Many years are spent exploring level 2, trying to execute waza with exacting precision and understanding. The ultimate goal is to arrive at level 3 wherein the iaidoka can create an imaginary opponent of superior strength. At level 3 the practitioner needs ultimate composure and zanshin. Full fighting spirit is required to even sit in the presence of such a powerful opponent. The enemy is faster, more skillful, and more patient. Only a perfect performance will result in victory, and the death of the enemy will be palpable.

Kishimoto Sensei’s explanation of visualization levels stuck with me because I had heard similar ideas before. One question Bill Hayes of Shobayashi Ryu Karate likes to ask is: “what is the worst part about kata?” The answer he provides is simple: “we always win”.

Even the most raw beginner will survive their kata practice, landing every punch and blocking every counter attack. Of course, Hayes Sensei goes on to explain that the real value of kata training is when you can feel the intent from your imaginary opponent and can execute technique with the same intensity and focus as if you were in a life and death struggle.

I am always excited and intrigued when high level concepts appear in multiple places. I find it encouraging that no matter what particular martial route you or I find ourselves on, there are masterful teachers discovering and sharing as much as they can.

As a final note, from personal experience and teaching, try not to obsess or rank your visualization abilities. The mere act of patting yourself on the back, or judging yourself harshly, will only distract from the task at hand and slow down your progress. Besides, if you declare yourself a level 3 practitioner, what motivation will you have to continue refining and challenging yourself?

*Exact wording and analysis is that of the author. Any errors of interpretation are his own and not that of Kishimoto Sensei.