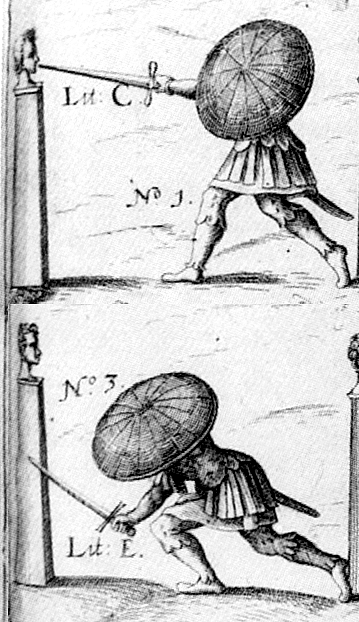 The Poem of the Pell (Ancient Advice on Medieval Combat)

The following is the first article of Reader Week II. Every article published this week comes from submissions by IkigaiWay readers. Their experiences and backgrounds are diverse, providing a wide range of topics. Today’s author, Benjamin G. Bradak, is a veteran Airborne/Air Assault infantry CQC specialist with the US Army 101st Airborne Division, and has served in two branches of the US military. He currently holds a 3rd degree black belt in American Kenpo Karate and is an expert swordsman.  He has co-authored the acclaimed Lessons on the English Longsword (Paladin Press) and forthcoming titles from the same.  He is the co-founder and head instructor of the Dragons Tail School of Defense.

The Poem of the Pell

Greetings, readers. I’d like to introduce the “Poem of the Pell” and put something new on your plates that you may not be familiar with; traditional martial arts of Western origin.  This piece, specifically, on swordsmanship.  Actually, what I’m giving you here is my modern English rendition (something I have not before seen, and actually quite difficult to do) of the most complete version of the poem.

This poem is one of the few known surviving true martial arts instructional works from England prior to the fifteen-hundreds. It is anonymous, and seems that it was written in the 15th century, probably the early half. Given its context, I think it to be a reasonable theory that it could very well be a contemporary transcription of an earlier edition.

It is actually an extremely valuable instructional text on the use of the sword and shield in training against the static pile. It gives very pertinent information on techniques, exercise, the value of cuts vs. thrusts, focus and mindset, footwork, and other training insights.

In the modern era, this poem has been kicked about in varying circles since at least 1876, when it was published in The Sports and Pastimes of the People of England, By Joseph Strutt & William Hone, which is still in print. Unfortunately, that book only contains a four-paragraph version.

The poem itself is simply a small excerpt from an anonymous medieval book on the Art of War entitled Knighthood and Battle, in the Cottonian library of England.  This medieval book is actually a verse-form update of a book written by Flavius Vegetius Renatus (a 5th century Roman generally referred to as Vegetius) called De Re Militari.

Alas, were things otherwise, I had hoped to include this complete poem, translation, and explanations of its teachings in our book (Lessons on the English Longsword, via Paladin Press), though circumstances proved unfortunately problematic. Perhaps in the future, if all goes well, we can do something of the sort.

The title that this poem goes by is a modern one, given in lieu of anything else, as the original excerpt has no title per se.  To tell the truth, I am not even sure where the exact term “pell” comes from. Though the device has had several names throughout history, I have found “pell” in no pre-modern literature, despite the ubiquity of the term now. In this poem, for example, they refer to it as a “pile,” which is still a term used and defined identically today: an upright beam or post in the ground.

With that in mind, here is the Poem of the Pell:

The discipline and exercise of the fight was this: To have a pile upright
Of a man’s height, thus the old and wise do write
With this a bachelor, or a young knight
Shall first be taught to stand, and learn to fight
And with a fan of double weight he takes as his shield
And a double-weight mace of wood to wield.

This fan and mace, either of which are of double weight
Of shield, swayed in conflict or battle,
Shall exercise swordsmen, as well as knights,
And no man, as they say, will be seen to prevail,
In the field, or in castle, though he assail,
Without the pile, being his first great exercise,
Thus write warriors old and wise.

Have each his pile up-fixed fast
And, as it were, upon his mortal foe:
With mightiness the weapon must be cast
To fight strong, that none may escape
On him with shield, and sword advised so,
That you be close, and press your foe to strike
Lest your own death you bring about.

Impeach his head, his face, have at his gorge
Bear at the breast, or spurn him on the side,
With knightly might press on as Saint George
Leap to your foe; observe if he dare abide;
Will he not flee? Wound him; make wounds wide
Hew off his hand, his leg, his thighs, his arms,
It is the Turk! Though he is slain, there is no harm. 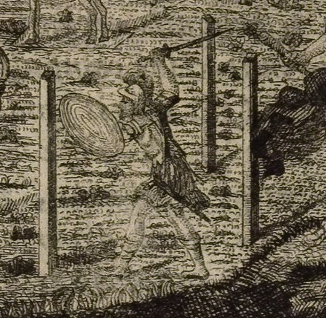 And to thrust is better than to strike;
The striker is deluded many ways,
The sword may not through steel and bones bite,
The entrails are covered in steel and bones,
But with a thrust, anon your foe is forlorn;
Two inches pierced harm more
Than cut of edge, though it wounds sore.

In the cut, the right arm is open,
As well as the side; in the thrust, covered
Is side and arm, and though you be supposed
Ready to fight, the thrust is at his heart
Or elsewhere, a thrust is ever smart;
Thus it is better to thrust than to carve;
Though in time and space, either is to be observed.

—————————————————————————————————————————
About the Author
Benjamin G. Bradak is a veteran Airborne/Air Assault infantry CQC specialist with the US Army 101st Airborne Division, has served in two branches of the US military. He currently holds a 3rd degree black belt in American Kenpo Karate and is an expert swordsman.  He has co-authored the acclaimed Lessons on the English Longsword (Paladin Press) and forthcoming titles from the same.  He is the co-founder and head instructor of the Dragons Tail School of Defense.

He can be contacted via www.facebook.com/DragonsTail, or at Casper1a@yahoo.com.  Don’t spam me.