The Impact of 9.0 – Understanding the Japanese Quake and Tsunami

By now you’ve certainly heard about the 9.0 earthquake and subsequent tsunami that caused massive destruction off the northeast coast of Honshu, Japan. The results from this natural disaster are still unraveling, but I would like to share a few pieces of information that might help you more fully understand the situation. I’ll also provide a handful of verifiable aid resources that you can utilize in case you feel compelled to donate.

First, let’s quickly assess how the earthquake actually occurred. According to USGS.gov, the quake “resulted from thrust faulting on or near the subduction zone plate boundary between the Pacific and North America plates. At the latitude of this earthquake, the Pacific plate moves approximately westwards with respect to the North America plate at a rate of 83 mm/yr, and begins its westward descent beneath Japan at the Japan Trench.”

A thrust fault refers to the situation where one piece of the Earth’s crust is pushed over/under a neighboring piece. 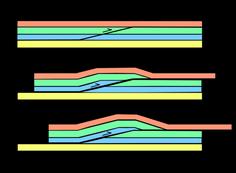 As you might imagine, there are many different kinds of thrust faults and the matter gets quite complex. But this is the general idea of what happened off the coast of Japan. (image courtesy of Wikipedia.com).

The tectonic shift that occurred in March resulted in the most significant quake in verifiable Japanese history. “The March 11, 2011 earthquake was an infrequent catastrophe. It far surpassed other earthquakes in the southern Japan Trench of the 20th century, none of which attained M8. A predecessor may have occurred on July 13, 869, when the Sendai area was swept by a large tsunami that Japanese scientists have identified from written records and a sand sheet.” – USGS.gov.

Although the death toll from the quake itself was moderate, the ensuing tsunami raised the number significantly. At last measure the toll was over 1,600 and looking to rise. The number of injured is many more thousands still.

The quake itself ripped apart many homes and roads and caused near disastrous shaking in highrises. After the major quake event (lasting over 2 minutes), the real danger came in the form of tsunami. As reported by Yahoo News, “The earthquake unleashed a 23-foot (seven-meter) tsunami along the northeastern coast of Japan near the coastal city of Sendai in Miyagi prefecture. The quake was followed for hours by aftershocks. The U.S. Geological Survey said 124 were detected off Japan’s main island of Honshu, 111 of them of magnitude 5.0 or greater.”

Large fishing boats and other vessels rode the high waves ashore, slamming against overpasses or scraping under them and snapping power lines along the way. A fleet of partially submerged cars bobbed in the water. Ships anchored in ports crashed against each other.

The tsunami roared over embankments, washing anything in its path inland before reversing direction and carrying the cars, homes and other debris out to sea. Flames shot from some of the homes, apparently from burst gas pipes.” 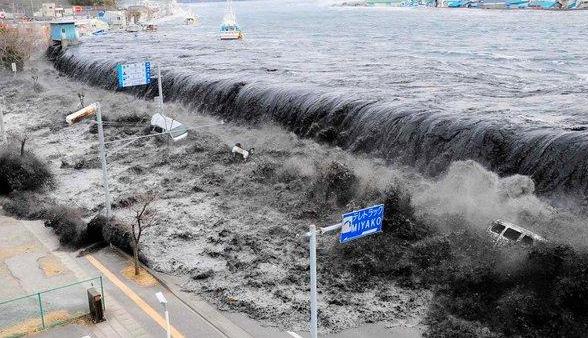 As damaging as the quake was, and as devastating the tsunami, even more concerns abound now as the Fukushima Daiichi nuclear power plant is struggling against meltdown and radioactive emissions.

“The quake caused serious damage at Tokyo Electric Power Company’s (TEPCO) Fukushima Daiichi nuclear power plant, about 65 kilometers south of Sendai. Three of the plant’s six reactors, which came into service between 1970 and 1979, were already shut down for inspection at the time the disaster struck. Those still in operation are designed to also shut down in the event of a quake, with diesel generators pumping water around the reactors to keep them cool.

But when the tsunami hit, flood water swamped the generators, causing them to fail. The reactors began to heat up.” – CNN Disaster Timeline

Over time the cooling systems proved inefficient and small amounts of radioactive cesium began to leak from the plant. In response the plant owners began a process of flooding the containment unit with sea water. This maneuver is nonreverserable and indicates a willingness to essentially destroy the facility to prevent meltdown (the corrosiveness of the salt compromises the long term usage of the facility).

Despite a series of fires and explosions, focused mostly around the No. 4 reactor, the containment vessels are still in place. These containment fields are built to hold or at worst leak, hopefully avoiding the kind of failure that occurred at Chernobyl. To learn more about the strength of these safety measures, view this article. To learn more about the worst case scenarios that are still possible, view this video.

As of right now, the area surrounding the plant is experiencing heightened levels of radiation, now at the point that could affect human health. Therefore precautions have been initiated to remove local citizens, U.S. Navy ships based nearby, and plant employees.

Due to the remarkable spread of social media, the world is experiencing this tragedy in a very visceral and connected way. More and more amateur video is appearing of the flood, the quake, and subsequent damage.

Here is some footage of the wave breaching some of the barriers already in place to guard against high waves:

And here airport visitors are stuck watching as the water floods around them, hoping that the glass and supports don’t give out:

Aid to the Japanese

Communication isn’t the only thing increasing with technology; the opportunity to help has improved as well. It’s important to recognize legitimate resources that are connected with rescue operations and avoid the scams and cons that are cropping up even as this situation unfolds.

Google has set up an outstanding Crisis Relief Center that makes it extremely easy to donate to the Japanese Red Cross, Unicef, or Save the Children. They also provide updated information on people and news in the area. Visit to donate.

CNN has also created an excellent article exploring the different organizations that have mobilized, including International Medical Corps, Shelterbox, Doctors Without Borders, and the Humane Society for Animal Rescue.

The term “Samurai” actually means “to serve”. Many of us that study budo believe that we have something, even just a thread, in common with the ethos of those old warriors. This is a way to thank the Japanese for the arts they’ve given us and to serve those in times of need.