The Hot Spring Girls – A Lesson In Bad Awareness

The town of Glenwood Springs, Colorado is known for its outstanding natural hot springs. None are more famous than the Hot Spring Pool nestled in the town proper. 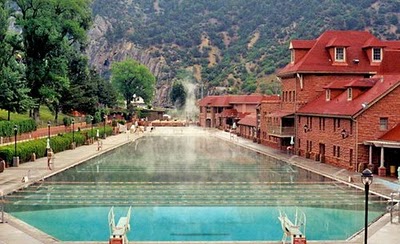 This immense swimming area is filled naturally with mineral water from beneath the Earth and is built like an Olympic swimming pool. One end features diving boards, swimming lanes, and water slides. The other provides a tranquil wading pool lined with natural rock benches.

My girlfriend Lauren and I realized that we couldn’t miss the chance to attend this hot spring, and were extremely excited at the prospect of a “night swim”. As we returned to town after a day of hiking, we decided to grab our suits and trek down.

As amazing as the scenery around the hot spring was during the day, the setting evening sun was even more stunning. As night fell, lights came on all over the facility and created a relaxing and soothing atmosphere.

Lauren and I settled onto a rock bench between an older couple and two young girls between the ages of 16-18. As the benches were long and public in nature, everyone simply shared the space together.

At first Lauren and I were occupied by the unusually hot water and the slight sulfur smell around us. It was a shock to the senses and warranted quite a bit of remarking. Eventually though we acclimated and began a quiet, restful dip.

As our conversation dwindled we couldn’t help but see and overhear what was going on right next to us. The two young girls were conversing with a slightly pudgy man of middle age. He was unassuming looking and quick with a smile.

The man chatted with the girls for awhile and asked questions about their trip to Glenwood.

What shocked us as we sat there was not that a middle age man would try to chat up young girls (that’s all too common), but the careless answers which the girls gave.

When asked if they had family in Glenwood one girl responded: “Ohh no I have some family back home. They actually don’t even know I’m out here. I basically do whatever I want.”

When asked if they were there with anyone they responded: “No it’s just us. We’re out traveling and having a good time.”

When asked if they had seen the whole town yet one girl responded: “Ohh no we’ll probably do some more exploring tonight and tomorrow.”

If you were to create a checklist of “things young girls should not do or say”, these two would have accomplished most of the items on that list. Whether or not the middle aged man was actually a predator, the girls gave him all the information he would have needed to know that they were alone, unaccounted for, and easily manipulated.

One would think that in today’s society of easily accessible news and increased awareness of rape and stalking cases that young women would be on high alert for this kind of behavior. However that assumption would be dead wrong.

With youth and adventure comes a sense of invincibility, and young girls (especially entitled and potentially sheltered ones) never get the dose of reality that it takes to actively avoid potentially risky situations.

As martial arts instructors it is not our role to give boy advice or dating tips, but it is our role to improve situational awareness and the ability to place oneself in a defensible position. This situation was a stark reminder to me of yet another way martial arts training can help young individuals who walk through the door. I hope those girls turn out ok, and I hope the young women at all of our dojos take a note here of what not to do!