The Bad Habits of Sweat

Effort put into the martial arts often pays dividends that surprise people. A release of endorphins and natural stress relief are two common byproducts that leave practitioners thinking ‘yea, I could do this every week!’ Many teachers run rigorous sessions (especially at Gasshuku) in order to test the will and spirit of students, bringing them together and promoting strength of character.

So evident are the benefits of sweating and working out that sometimes we forget to do anything else.

The Cult of Sweat

Some people are naturally sweaty and start perspiring during the walk from the porch to the car. They can’t help it and it really has little bearing on their level of endurance. Even still, there seems to be a cult of sweat, as if the salty liquid were knowledge itself pouring out of the body.

The following individual, Ernie-San, is a respectable martial artist as far as I can tell. He has traveled to Okinawa for Gasshuku and in order to protect the lessons taught through his style he opts not to record the actual training. He did, however, record his badge of honor:

His sense of humor is fun and all that, but you can really tell that sweat is worth more than currency to him. I wonder – did Ernie-San get to probe the deep understanding and complex knowledge of the instructors, or did he spend most of his time busting his butt, site-seeing, and then going home.

Many times Okinawan instructors will give western students what they want – a rigorous run-through, more material, and a certificate of whatever (not saying this is Ernie-San’s case, just a general truth). It simply isn’t worth the instructor’s time to show the cultural details and deep subtleties that take long hours of contemplation and investigation. It’s much easier to make visitor’s sweat, work kata/basics/drills, and send them on their way.

Workout, Workout, Think About It

Basics are the key to any quality martial artist. Constant routine and repetition can make a person ‘brilliant at the basics’, as Bill Hayes Sensei likes to say. Drills, kihon, kata, bag work, etc drive much of martial arts training, no matter what style. Unfortunately many people believe that repetition alone is going to grant them deeper martial understanding. Albert Einstein once famously defined “Insanity” as “doing the same thing over and over again and expecting different results”. The same is true for martial arts.

To truly improve in significant ways, practitioners have to learn about how their body moves and how they can effect results in other people. A straight punch is just a straight punch until you learn kime. The punch changes once you learn angling. It changes again once you improve your timing. Then it needs to be combined with kyusho, tuite, grappling, etc. That’s one technique. Now think about the spectrum of a whole kata. And that’s just in karate terms; each art can be faned out in the same way.

To even begin understanding these ideas and making them a part of your subconscious/effective self, you need to turn down the sweat for a little while, quiet the noise, and “listen”. Listen to techniques, your body, the opponent’s body, and how it all interacts.

How Thinking Can Go Awry 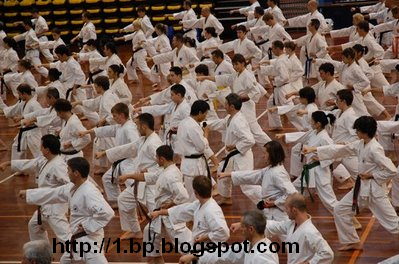 As I said earlier, the workout trap is all too enticing for practitioners. But the same goes for teachers. It’s much easier to run a class where you automate students through kata, bag work, and kihon rather than figuring out ways to make each one actively think and assess themselves.

Unfortunately too much ‘thinking’ can be a bad thing. An ‘armchair sensei’ is one who can quote you techniques, vital points, history, and stories of personal prowess but never seem to get off their can to actually do some hard work.

Armchair instructors and practitioners (and some soft stylists who rely too much on theory) run into a common problem – a brush with tough reality. Having trained with a lot of people bigger, tougher, and better than me, I can tell you that there is no magic bullet or amount of practice with imaginary foes that can prepare you for the actual striking and manipulating of a resistance opponent.

No bones about it – a strong body with good basics is key, and to get that you have to work hard.

A little Yin With a Little Yang

You gotta have both sweat and contemplation. You need times where you can run your techniques, but also an opportunity to work slowly and outside the normal confines of your style’s structure. You have to take off the reigns once in awhile and get attacked in unexpected ways to see how your body will handle itself (and I don’t mean sparring, which is a very structured event). You need to feel subtle movements in your opponent so you can improve your senses and natural reactions.

We have a joke in our dojo that ‘black belts don’t sweat’. It essentially began because my instructor Rick Zondlo and I are not naturally sweaty people. But what the joke really came to mean is that good technique happens when you are relaxed and ready, not tense or anxious.

When the body is in a tense state emotionally or physically it sweats; and as we established earlier, sweating is something many people desire in their training. Ultimately these practitioners end up cementing bad habits that promote physical and emotional tension rather than eliminating it! Furthermore, in order to work more muscle groups and get the whole body into the act, they tend to use more exaggerated actions than is necessary. So an inside block turns into a deep stanced, arm swinging event rather than a minute body shift and subtle arm movement (breathing and tension kata notwithstanding of course).

Focus is often misused during these workout states as well. The practitioner is thinking about the ‘good burn’ they are feeling and how soaked their sweat rag is rather than trying to eliminate wasteful portions of technique (not to mention the prideful ‘I drank X amount of water today’ conversation that always seems to follow).

A prime example of the relaxed body in action takes place during sparring. Have you ever met an older expert who can spar for an hour only to come away with a moist forehead, rather than being hunched over, panting and wheezing? These are individuals who have learned to use their body naturally, only exploding during techniques when the moment is right. Good distancing, angling, and control of centerline eliminates any sweat-inducing flailing.

Find people in your dojo who have good ego control and work techniques slowly, under control, and with no padding. Figure out ways to induce results with a minimum of exertion on your part. Don’t settle for compliant results (especially within arts like aikido that require good ukes); give yourself a chance to fail and work until you can do good technique on tough opponents that are behaving in ways not predictable to you.

Sweat itself isn’t a problem – it’s when sweat (and in a broader sense the workout mindset) becomes more important than the exploration of the arts themselves.