Don’t believe me? It’s true I tell you! The Okinawans had both grappling and wrestling. They called it tegumi, and if you do karate you do it too (whether you know it or not). 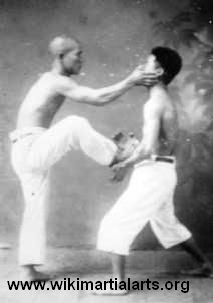 Imagine for a second a culture that, for as long as anyone can remember, has placed an emphasis on combat training. A culture that has acted as a sea-hub for various other countries that had their own ideas and concepts about fighting. A culture that was banned of its militaristic weaponry.

Now imagine that same culture saying…we will ignore your close fighting range. You go away now.

It simply wouldn’t have happened, and it didn’t happen. In fact, wrestling has been a part of Okinawan culture for much longer than what we now know as karate.

Tegumi has often been described as a form of Okinawan Sumo. When people hear the term Sumo they naturally envision the Japanese variety, wherein two giant, rotund men push and slap each other out of a ring (which is an awesome event, don’t get me wrong).

Unfortunately, Okinawans have never been built the same way. They simply don’t grow that large. Okinawan Sumo instead resembled more of a wrestling match. There were no established rings or ‘dojo’ for tegumi matches; they happened more frequently wherever flat, safe ground could be found. In order to win, one participant had to trip/throw, control, and ultimately pin his opponent’s back to the ground.

As there were no Nintendo’s at the time, this activity was quite popular, especially among the younger men and boys.

How it Became More Than a Sport

As it was, tegumi was mildly useful from a combative perspective. However, the Okinawans were also in the process of developing a more serious combative method derived from Chinese influence mixed with indigenous ideas. They called it Ti (or te), and the wrestling every Okinawan boy grew up with was subsequently integrated into the larger whole.

Where the sporting aspect of tegumi was mostly about leverage and off-balancing (aspects the Okinawans would not discard), the combative tegumi began to integrate poking, pulling, proding, pinching, small joint locks, gauging, and all variety of other nasty things. Tegumi was dirty in-fighting because the Okinawans realized that only a portion of life protection combat involved punching and kicking.

To spice things up even more, they began to integrate their tegumi with tuite and kyusho (vital point striking). They realized that as distances closed from punching/kicking range to grappling range, there was a variety of unpleasant technique-series they could utilize to setup, off-balance, and incapacitate their opponents.

Why it Went Away

A few generations ago (around 1905) karate was beginning to make its way into the Okinawan school system. The Okinawan masters charged with teaching children realized that all the devastating and permanently damaging techniques true karate entailed would not be safe in the hands of adolescents. After all, it would be very tempting for children to use their techniques in times of anger, or pride, or curiousity.

Azato, Itosu, and the other caretakers of karate thus decided to de-emphasis the tegumi and kyusho aspects and focus more on the physical fitness elements of stancing, punching, kicking, blocking, etc. Funakoshi Gichin (of Shotokan) found himself in a similar boat when first introducing karate to mainland Japan (remember, Funakoshi Sensei was invited to Japan as part of a physical education program and began his teaching at universities). 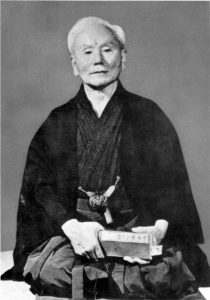 The activity of tegumi as a sport still lingered amongst the Okinawan populace, but as a method of combat it began to fade away. Many of the students both in Okinawa and Japan grew up not knowing about tegumi, or that a wrestling/grappling component even existed in their karate art. That lack of training was passed on to their students all the way down to us.

Why It’s Coming Back

Not every karateka on Okinawa was involved in teaching the public school system. Furthermore, teachers like Azato and Itosu didn’t just teach school children. Multiple instructors on the island were able to maintain a few private students on their own and pass on the ways of kyusho, tuite, and tegumi. That generation was able to keep the traditions alive.

One man in our current generation has done significant work to bring about public awareness of tegumi, and his name is Patrick McCarthy. Anyone who talks about tegumi, including myself, is likely influenced by McCarthy Sensei’s deep research and investigation. McCarthy Sensei has even developed complex training routines based off of the trapping, locking, and off-balancing aspects he has discovered over the years.

Tegumi is receiving even more attention recently with the increased popularity in jujutsu, brazilian jujutsu, and mixed martial arts. Martial artists are realizing the power and importance of clinching and ground fighting and are taking more active steps in at least becoming competent in those arenas.

Hidden in your kata of course. That is, the core principles and applications are buried in your kata from times well before application was watered down for the school system. In order to start accessing tegumi applications, you first must take off your niceness-gloves. Instead of punching and kicking, you have to develop the mindset of gauging eyes, grasping the throat, twisting skin, fish hooking, etc. From their you’ll notice your techniques become more open handed and more flowing one into the next.

Examine the core principles of movement and how your body changes in relationship to your opponents. Don’t turn away from an opponent during bunkai, take them with you on a throw or takedown. Find out what happens if you go to the ground with them. Most of all, have fun exploring and keep an open eye for ideas from other people, whether they are from karate, jujutsu, or anything else.

My best on your continued journey!