This week’s DW post is going to be a little different. Normally I do some research on Sunday and get my post out by Monday night or Tuesday morning. This leaves plenty of time for people to vote on who they think would win before the show airs on Tuesday night. This week the executive powers that be decided to run the last episode of the season on Sunday night. That being the case, I watched the episode on Monday and will do some post analysis here. Voting will still be open though as what I’m really interested in is people’s opinions. 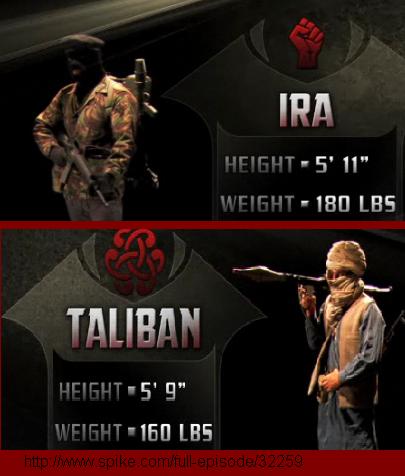 Who are the IRA?

I’m going to let wikipedia do some talking for me because whoever wrote the wiki entries knows a lot more about this than I do:

“The Irish Republican Army (IRA) was an Irish republican revolutionary military organisation descended from the Irish Volunteers, established 25 November 1913 and who in April 1916 staged the Easter Rising.[2] The Irish Volunteers were recognised in 1919 by Dáil Éireann (its elected assembly) as the legitimate army of the unilaterally declared Irish Republic, the Irish state proclaimed at Easter in 1916 and reaffirmed by the Dáil in January 1919. Thereafter, the IRA waged a guerrilla campaign against British rule in Ireland in the Irish War of Independence from 1919–1921.” – Wikipedia

The IRA was known for extreme urban guerrilla warfare. They used simple yet effective technology to do damage on a large scale. Their cells, usually 4-5 people in size, would strike quickly and unpredictably but with a large amount of planning and tactical know-how.

Who are the Taliban?

“The Taliban, also Taleban, is a pro-Wahhabi Sunni Islamist, predominately Pashtun fundamentalist religious and political movement that governed Afghanistan from 1996 until 2001, when its leaders were removed from power by Northern Alliance and NATO forces. It has regrouped and since 2004 revived as a strong insurgency movement fighting a guerrilla war against the current government of Afghanistan, Pakistan, allied NATO forces participating in Operation Enduring Freedom, and the NATO-led International Security Assistance Force (ISAF).[6] It operates in Afghanistan and the Frontier Tribal Areas of Pakistan.” – Wikipedia

The Taliban cells utilize fear as their greatest weapon, causing disorganization and panic in both their enemies and the local civilians. They use rugged yet powerful technology that properly fits the terrain of Afghanistan.

What are the Weapons?

The IRA utilized the LPO-50 flamethrower, the nail bomb, the slingshot, and the AR-15 Armalite.

The Taliban relied on the RPG-7 rocket launcher, PMN land mine, the bayonet knife, and the AK-47.

The interesting matchup was between the AR-15 Armalite and the AK-47. The Armalite was clearly more accurate, but when put through mud and water conditions, the AK-47 held up much better. This was a case of great value between both guns, and intelligent selection by both warriors.

The Armalite’s accuracy would be extremely useful in an urban setting where mud, water, and grime is less of a factor. The AK-47’s durability is definitely valuable in the caves and desserts of Afghanistan.

A Result and a Vote:

In case you didn’t see who won, I’m going to give you a chance to vote first. Who do you think was deadliest? (careful not to scroll down to far)

In the end, the IRA took the victory. The accuracy of the Armalite and the deadliness of the nail bomb really helped their stats. The results were close though as the AK-47 and the rocket launcher did their fair share of damage.