***Special Thanks to my visitors from BlackBeltMama.com. For those of you who aren’t familiar with BBM’s site, I recommend checking it out right away. She is a friend of mine (and I teach her some karate from time to time), but she is also my blogging Sempai! Many bloggers look up to her (including myself), and you’ll see why once you read some of her entertaining commentary on life and the martial arts.***

On to the topic at hand…

It is said that once you study a martial art long enough, you begin to understand all martial arts. I thoroughly believe in that. Over the past few years, one of my goals has been to identify connections between what I’m doing and what other people are doing.

Even though I’ve had this mindset for awhile, I’m still shocked when I realize a new connection, and wonder how I hadn’t seen it earlier.

Silat – Malaysian Art of Self Defense 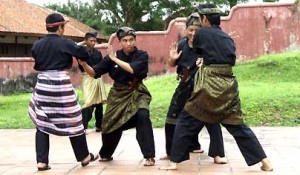 I’m a fan of the show Human Weapon, but haven’t had the chance to see all the episodes yet. I finally sat down today and watched the episode about Silat.

Silat is a Malaysian born martial art that has roots that go back as far as the 7th century. In the cluster of Asian countries that have significant martial arts backgrounds, Malaysia is tucked in quite nicely. Have a peek at this map – 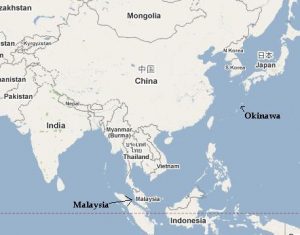 You’ll notice China, Korea, Japan, India, and Okinawa all hanging out in the same vacinity. You’d better believe that trading routes were open between these countries, and it wasn’t only material goods being exchanged. China, as the dominant force for a very long stretch of time, is a common thread to which almost all Asian arts can trace roots. Take that shared background, combine it with cultural contact through trading and war, and what you’ve got is a lot of styles that share ideas.

My empty hand training is in Okinawa Kenpo Karate, which is why I use that style as a reference point when looking at other arts. But I wonder, when you read some of the similarities I found, will you notice them in your art as well?

Here are some things I saw:

1. Movement to the Outside. When slipping a punch or kick, Silat combatants love to move to the ‘dead side’, or outside of their opponents. This is a critical concept in Okinawa Kenpo as it removes many of your opponent’s weapons from effective range.

2. Quick,Circular Block/Counter Combinations. No doubt from Chinese influence, both Silat and Karate try to shorten the time needed to respond to an attack by using circular block/counter combinations. These can often be found in karate kata as ‘rolling backfist’ style techniques. Practitioners of Nai Hanchi Kata should be pretty familiar with this rhythm of attack.

3. Balanced Stances. I noticed something that strongly resembled shiko dachi. While both Karate and Silat utilize these stances, they don’t rely on them during quick techniques; only as tools to add power and balance when appropriate. 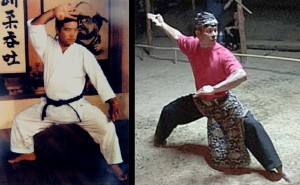 4. Vital Point Striking. By vital point striking I mean targeting those areas of the body which are naturally weak. A ridge hand strike to the throat or claw to the eye can be much more effective than a straight punch blindly aimed at the chest region.

5. Bunkai. Bunkai is analysis and application of techniques in a kata…and something neat happened while I watched the Silat practitioners show their self defense tactics – I was able to slip each combination into my own kata with very little stretch of the imagination. There were series of strikes and targets that I immediately equated with particular sequences in Karate kata. Not that it took any special skill on my part to do so, it was just a matter of keeping an open mind.

If you get a chance, go back and check out that episode. I think I’ll watch it again in the near future to try and pick out even more connections.