Karate-Do: My Way of Life by Funakoshi Gichin is a small book packed with extremely valuable anecdotes. Funakoshi’s stories grant us a peek into an Okinawa that is mostly lost to antiquity.

One story that strikes me as particularly interesting is entitled “A Humble Man” (pg. 62 if you’re reading along ;- )

In his daily travels, Funakoshi made it a habit to walk to-and-from the school where he taught.  One day, when returning home from a teachers meeting that had run late into the night, Funakoshi decided to hire a jinriksha driver.  Jinriksha, also known as rickshaw, is a two wheel cart pulled by a single “driver”. 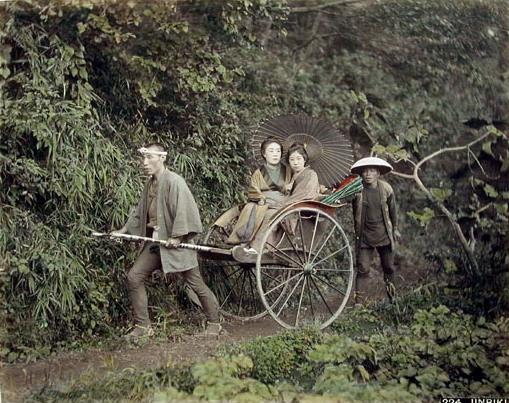 As Funakoshi explains, “to while away the time, I began a conversation with the jinriksha man and found, rather to my surprise, that he gave extremely short answers to my questions.  Usually jinriksha men are as loquacious [1 point for the translator] as barbers.  Further, his tone of voice was extremely polite and his language was that of a well-educated man.”

Funakoshi decided to uncover the identity of this mysterious man, who hid deftly underneath a wide brimmed hat.  His plan was to stop the ride and relieve himself, and at some point grab a glance at his driver’s face. His attempt failed. They began walking further down the path, the driver keeping a pace behind at all times.  Funakoshi then attempted one decisive action to discover the man’s identity –

“Suddenly, at a bend in the road, I wheeled around and grabbed a shaft of the jinriksha and at the same time tried to get a glimpse of [the driver’s] features.  However, quick as I was, the man was even quicker, as he pulled his hat down deep over his face.  So quick, indeed, was his reaction that I was now perfectly convinced he could not be an ordinary jinriksha driver.”

Through his calculated observations, Funakoshi was able to determine that the man was one Mr. Sueyoshi, a renowned and respected kobudo exponent (especially known for his bojitsu). He then learned that, even though coming from a well established family, Sueyoshi had fallen on hard times and needed money to pay for medicine for his ill wife.  In order to accomplish this, Sueyoshi became a jinricksha man at night, using the darkness to conceal his identity and therefore save himself from disgrace.

Regarding his unlikely driver, Funakoshi had this to say:

“Had [Sueyoshi] desired fame and fortune, he could certainly have acquired it, but possibly at the expense of engaging in work that he would have felt to be beneath his dignity.  In this he was…every inch a samurai.”

When examining the exchange between these two masters, it is evident the role respect and dignity played in their day to day lives. In Okinawa, like in many Asian cultures, the reputation of family plays an extremely important role.  Sueyoshi’s unwillingness to show his face was an effort to leave the image of his family fully intact without “sullying” it by being acknowledged as a “lowly” rickshaw driver.

Funakoshi, despite being taken by curiosity, kept himself completely composed while attempting to catch a look at his mysterious driver. Once the identity was revealed, both men showed respect by walking side by side as opposed to one in front of the other, or one riding in the cart.

It’s also interesting to note how much information the men were able to gather on each other simply by monitoring movements during a mundane activity like a cart ride.  Sueyoshi’s martial arts prowess, and even identity became evident simply by detecting his mannerisms.  This speaks both to the mental and physical enhancement martial arts study can provide over time.

Funakoshi’s statement about Sueyoshi not taking work “beneath his dignity” is very telling of the weight Sueyoshi placed on his art.  Sueyoshi, rather than sell out and market his bojitsu to become rich, eeked out a living at night performing duties that were very much beneath his status. 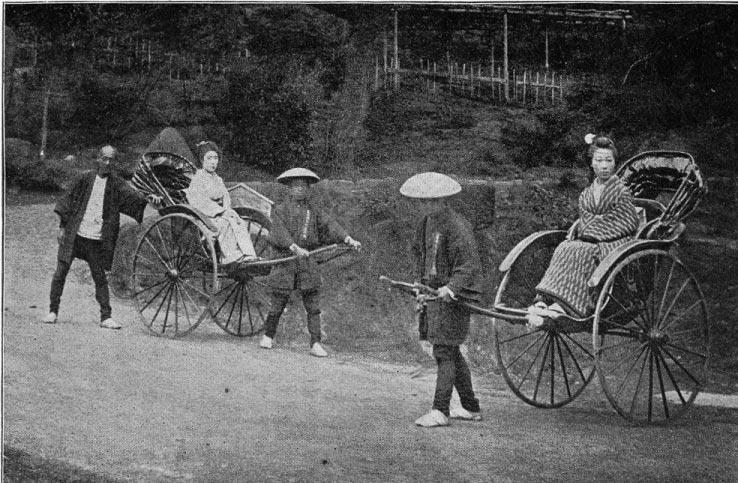 I admire Sueyoshi’s commitment to maintaining his art and not watering it down for public consumption.  By taking the path of Koryu (“old style” method of martial arts transmission utilized heavily by the Samurai) he certainly maintained a high level of quality in his kobudo.

Koryu arts were, by nature, closed communities filled with secrecy and tradition.  The main purpose of this was to maintain battlefield effectiveness.  The true goal of Koryu was to kill opponents.  The “do” aspects (mental and spiritual growth) were secondary. If a ryu or art like Sueyoshi’s bojitsu was to retain its complete effectiveness, he would have to keep his student body very low and the transmission of his concepts secret.

On the other end of the spectrum is Funakoshi, whom I also admire.  Through his efforts to spread karatedo, more and more people became aware of the physical, mental, and spiritual benefits of karate training. Truly, if it weren’t for him and others like him, the martial arts wouldn’t be what they are today. My own knowledge of the arts (as limited as it is) stems back to individuals like Seikichi Odo who allowed gaijin (outsiders) to study.

The One Conclusion I Will Make…

I don’t have any particular answers when it comes to the paradox of Funakoshi and Sueyoshi. They both had equally good justification for their actions.  But what I will say is this – it’s astonishing what a four page anecdote can reveal, both about the men involved and us as practitioners.

This story made a personal impact on me because Sueyoshi No Kun is a kata I practice in my style of kobudo (we actually break it up into two kata, Sueyoshi Ichi and Ni).  Where once I saw these kata as mechanical movements devised by some shadow of the past, I can now perceive the man behind their creation.  I can sense his motivation to save an ailing wife and observe his behavior as he followed the martial way.

Stories such as this invite us to study our arts deeply.  By imagining humid rains, dark nights, and pebbled studded causeways, we can place ourselves in the shoes of our martial arts forefathers and imagine what they were thinking while perfecting their art. We can then place ourselves back in our own shoes and think about our day-to-day tribulations and what might cause us to train differently.

While some folk might feel burdened by tradition, I believe it can be endlessly fascinating, and when taken in the right context, can help free us to express ourselves.