So Long, and Thanks for Blocking!

The quickest way to get hit by a good fighter is to block them. 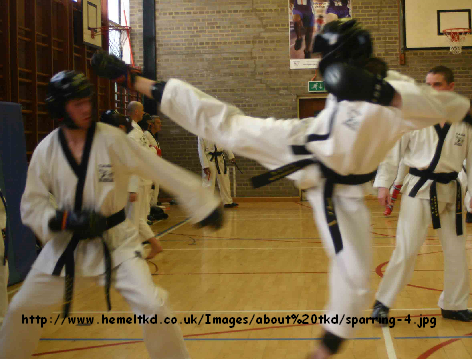 Can you visualize what happened just a moment before this picture was snapped? The leftside downward block should give you a big clue. The kicker sold the defender completely on a low technique – probably snapping a front kick before rolling right into a high roundhouse.

The defender deflected the initial attack, but in the process hung himself out to dry for the follow up.

Independent Blocks Will Get You In Trouble!

So why exactly did our wayward defender get rocked? The answer is that he relied on independent blocking.

Skilled fighters will be able to notice disjointed blocking and capitalize on it immediately. Let me further explain through the magic of stick figure drawing:

As you can see, a disjointed block is really when one arm or leg moves to create a block without the rest of the body doing something useful.

Generating these kinds of openings is a huge staple of fighting, and tournament combatants have made entire careers on knowing how to do it. The more you are able to dictate the movements of your opponent the more you command a fight. What that means is, as defenders, we have to do our best to eliminate falling into these traps.

It is impossible to know what exactly our opponents are going to do. Furthermore, it is wasted mental energy trying to figure it out. If you are constantly trying to analyze and asses the intentions of your opponent, you give him/her the opportunity to dictate the essence of the fight. You will always be a half step behind. Eventually it will catch up to you and you will get overrun.

In order to fix a problem with reactionary, independent blocking, you have to understand the nature of tactics. Tactics are designed to make you move in a certain way and dictate your train of thought. So that means if your opponent punches low, he wants you to block low in order to create an opening for his/her next attack (or if you’re not fast enough, to actually hit you low).

To nullify the effectiveness of these tactics you have to learn to cover zones and control centerline.

Let’s say you have one hand high covering your facial region, and one low covering your midsection. If the opponent steps in with a low kick or punch and you drop your high hand to block it, you must develop the habit of rotating your bottom hand high to cover the zone you just left open. By cycling your hands in this fashion, you never leave a clear opening even for a quick second attack.

In addition to covering your zones properly, you must develop a good sense of centerline (and distancing) to foil the intentions of your attacker. To use the same example as above, if the attacker comes in with a low kick, instead of blocking at all, you have the option of moving just slightly backward out of range and leaving your hands completely unmoved. At most the kick will graze your bottom hand, which is there to cover anyway.

At this point your defense is completely unaffected by the opponent’s tactic, which means his next attack will be very manageable and unsurprising to you. As he comes in with that high punch, your defense is still in place, which means you can gently brush the punch aside as you step in with your own attack.

This distance and centerline control is also critical when moving side-to-side and on the 45’s.

The key to beating a superior tactician in sparring is to not play the game at all. As they try to invoke movement in you, your superior control of distancing and timing combined with a calm mind can allow you to move in very small increments, and capitalize on openings created by their complex intentions.

Never move your guard unless you have to or unless you want to create an intentional opening. Many people are amazed at how much excess blocking and moving they do simply because their body tells them that they SHOULD block. If a kick comes grazing near your head  but never touches you, there is no reason to block. If a person punches at you but is just out of range, no need to block.

Become an enigma of simplicity! Conserve your movement and wait patiently for the right time to be aggressive.

Find someone in your dojo who has good control. Have them come in at you with attacks while you are in your on-guard posture. Make sure you are guarding your high zone and low zone, however it is you like to do that. Have your partner come in with various controlled attacks and practice avoiding the attacks with minimal movement. Keep your hands as still as possible, brushing attacks aside just enough so that they barely miss you. Don’t commit to blocking and don’t chase their attacks. Be as simple as possible and if you have to drop or raise a hand, make sure to cycle the other hand to cover the exposed zone.

This drill is all about feeling. Feel just how little you need to do to move outside, around, or in front of their techniques. Keep your legs underneath you and ready to spring backward, frontward, or to the side. With your body doing so little, your mind will be free to notice the cues the opponent is sending when they are about to attack (or are in a position of weakness), and since you are still in a position of strength, you’ll be able to act and dominate.