After an extended visit to gunville, we are getting back into warriors of antiquity (and I couldn’t be happier about it!) 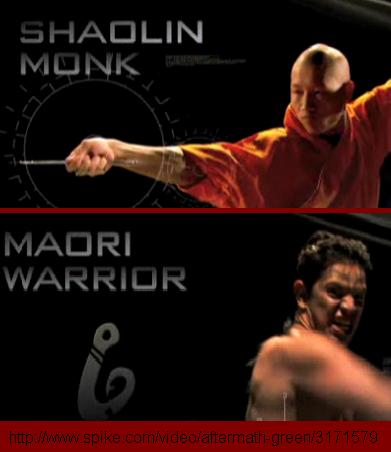 In this week’s episode the Shaolin Monk faces off against the Maori Warrior in an intriguing clash. Where matchups like ninja vs spartan and gladiator vs apache could be easily fit into the ‘strong vs fast’ box, I don’t believe this match is so readily defined.

A Bit About Maori

The Maori are a native tribe of New Zealand who’s ancestors likely came from the islands of Hawaii. Living alone on the isolated New Zealand islands for thousands of years, the Maori developed a unique and complex culture.

It is said that 12 tribes originally made the journey from Hawaii, and over time, split from each other and spread across New Zealand. In order to keep growing (and keep diversity in their gene pools), they would conquer one another and integrate the women from other tribes into their own. Because of this warring nature, the Maori had to develop sophisticated fighting methods.

Here is a look at a Maori warrior in action (it’s just a lighthearted demo, but still worth seeing):

The Maori method of fighting is surprisingly chinese in nature. They utilize meridian theories and exercise through partner training, kata-like drills, and harsh tests of spirit. Much like other elite warrior castes, only the hardiest and most courageous Maori became true warriors.

One interesting note about the Maori is that they would often eat their fallen opponents. They did this both as a sign of victory and as a form of sustenance on an island that had little in the way of meat.

A Bit About Shaolin

The Shaolin Monks are easily among the most recognizable warriors of all time. In their trademark orange garb they fly around performing remarkable feats.

The Shaolin get their name from the trademark Shaolin Temple where their particular brand of Kung Fu was born. As legend goes, the monk Bodhidharma came from India on an historic pilgrimage when he came across a band of sickly monks praying at the Shaolin Temple. In order to improve their abilities to focus during medititation and perform their day-to-day duties, Bodhidharma taught them body hardening and fighting techniques.

Although this mythology has had many holes poked in it, it is the generally accepted story for the beginning of Shaolin.

Now a look at what the monks do:

Shaolin training is famously stark as practitioners are forced to devote their entire being into training. Eating very little and living in spartan conditions, the monks train and perform every day.

The monks have experienced a significant change in the past few decades. Going from religious body to entertainment troupe, the Shaolin lifestyle and goal has become less and less about fighting and more about entertainment.

The Weapons of Maori and Shaolin

If there is one thing the Shaolin have, it is a plethora of weapons. Amongst the most commonly used are the broadsword, straight staff, convenience spade, and whip chain. (see some pictures here).

The Maori, on the other hand, utilize very few weapons. Their focus is on spear (taiaha) or straight staff and club (mere, wahaika, kotiaiti). Maori rarely threw their weapons but could use the spear as a javelin. (see some pictures here).

If this were modern times, the decision would actually be easy. Shaolin monks have lost most of their devastating combat ability in exchange for glamorous technique and showmanship. The Maori, on the other hand, are still a select group and their training has maintained a lot of its simplicity and effectiveness.

Unfortunately, I have to assume that this match will take place during both of these groups golden eras. That being the case, the Shaolin will have a sophisticated array of fighting concepts and weapons.

The Maori warrior is likely to be stronger. I also like the simplistic approach they take to fighting. The Shaolin is likely to be quicker and more dynamic when it comes to weapons. Because this show tends to be mostly a matchup of weaponry, I think I have to ultimately decide in favor of the Shaolin Monk. In real life, I would probably go the other way.