I’m back from both Christmas and the bubonic plague.  It’s amazing how quickly some of these flu viruses can spread, and how effective they are at putting people out of commission.

Anyway, overlooking those details I’d rather not relive, I’d like to share a piece of my Christmas spoils with you.  Check this out: 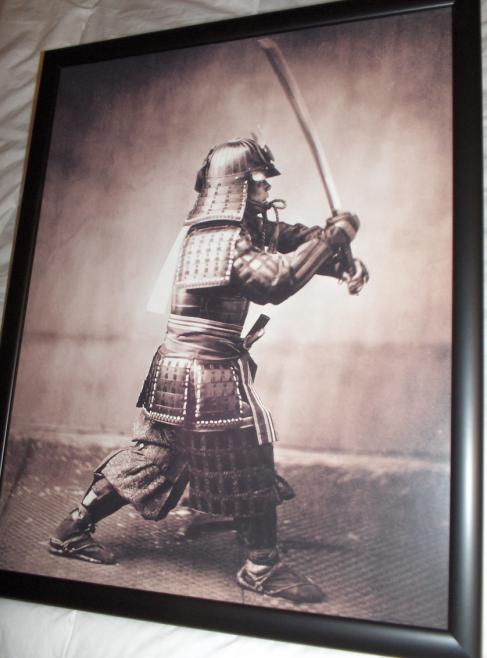 Pardon the weird angle, I was trying to avoid glare.  This is an excellent art print of a classical Samurai that I received.  It’s about the size of a normal poster, but came framed and ready to go.  I was very pleased! This is a great look at real Samurai garb in action, as opposed to resting idly in a museum somewhere.

The development of Samurai armor is very interesting and demonstrates great battlefield ingenuity.  This complex weaving of chords, iron plates, and fibers creates a durable yet flexible protective shell.  Furthermore, the development of arts such as Jujitsu, Aikido, and Judo were all born from the Samurai and were utilized against opponents wearing this exact kind of protection!

But why does Samurai armor look so much different than the war-gear of other countries?  Most predominently it’s due to the focus of speed and flexibility over raw protection. While a European Knight would be able to withstand blows and deliver punishing, pulverizing strikes with his broadsword, Samurai were more interested in quick killing blows with katana or spear. They would use accurate and evasive tactics throughout the battlefield, foregoing the protection of platemail in favor of maneuverability.

Furthermore, the armor of a Samurai was indicative of a great many things on the battlefield (not just how many hits he could take).  A warrior’s clan, status, and military propensity could all be determined by his protective gear. Each clan had their own Gusoku-shi, or armor makers, who would design armor specifically for each Samurai (no walmart brand available at that time).

Furthermore, time and necessity changed the design of Samurai armor.  In the picture above we see a very functional, battle-ready suit.  This is quite unlike the decorative, Tokugawa-era pieces that rest in many showcases.

Samurai armor has many many pieces, and every minute detail is important (for example: the way you laced your armor would be indicative of your rank and status), but essentially there are six main components: chest protector (yoroi), helmet (kabuto), mask (ho-ate), sleeves (kote), shin gaurds (sune-ate), and loin gaurd (koshi-ate…also known as the most important piece).

High ranking officers would ride into battle mounted, wearing  extremely elaborate suits of armor and demonizing masks, displaying their prowess and clan identity.  Warring samurai, like the one in my poster above, stuck to what was functional.

Samurai armor and culture is extraordinarly complex, and not a single knot goes without deep contemplation.  Although we only scratched the surface, we did learn a little about the individual featured in my picture above.  Hopefully he’ll serve as a reminder to me that there is still much to learn, and more budo spirit to be attained!