As long time readers here know, I have a great passion and interest in Bunkai. Bunkai is the application and inspection of meaning in kata, and to me it is as integral as the movements themselves.

Recently I got a chance to watch a new work by Charlie Wildish and Keith McKay Cormack entitled “Inside Bassai Dai”. 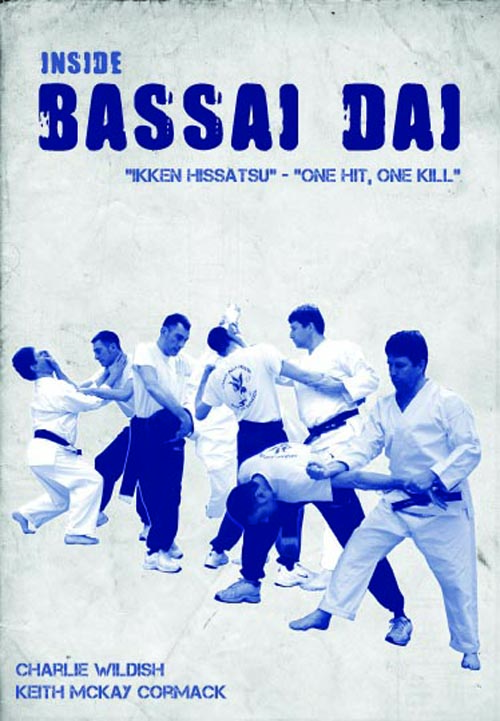 Wildish operates the blog Bunkai Jutsu and decided to create a DVD entailing his breakdown of the kata Bassai Dai. In the video Wildish is joined by his friend and ‘partner in crime’ Keith McKay Cormack. The interesting thing about this duo is the diverse backgrounds they bring together, Wildish a Sandan in Shotokan Karate and Cormack a student of Choy Li Fut Kung Fu.

The video is staged in front of an unadorned yet attractive stone wall, which seems to set the mood of the entire video. Wildish and Cormack are friendly and down to Earth in their explanations, yet stay very focused on the task at hand, wasting little time in frivolity.

Wildish begins by demonstrating the kata from multiple angles, then breaking down each segment into possible explanations. Following Wildish is Cormack who demonstrates how the idea of the technique appears in his Chinese background, and how he might approach bunkai from a Kung Fu perspective. It is enjoyable to actively see the similarities and differences played out.

This video is unpretentious, straight forward, and focused on content instead of flashiness. As such I feel it does justice to the spirit of Karate.

As a bonus I was also able to check out Wildish’s “10 Kicking Tips”, which guides the viewer not through specific kicks, but through some of the basic physics and ideas that make kicking effective. This DVD was also an enjoyable watch, especially as Wildish described ways in which kicks can be thrown in a true straight line.

All in all I would recommend these resources to individuals who either study Bassai Dai or are looking to enhance their overall understanding of Bunkai. The procedures used in these DVDs are sound fundamentally and can be relied upon to elicit positive results.