Names matter. It’s very hard to learn about a subject without a name you can assign attributes to. Unfortunately, there is a lot of confusion over the names of Chinese martial arts. This is very bad, because when naming systems are inconsistent, it can disrupt the way your mind stores information. Suppose I read a book about Xingyi. In my mind, I file that information under the “Xingyi” column. Then I see a video about Hsing-I, and I file that information under the “Hsing-I” column. But Xingyi and Hsing-I are exactly the same art, just written differently. If I didn’t understand that fact, I might even waste my time trying to find differences between Xingyi and Hsing-I.

With that in mind, there are three things that you need to know in order to understand the names of Chinese martial arts.

1. The Western World Doesn’t Know How to Romanize Chinese

Chinese uses a non-Roman writing system. There is no alphabet, so any attempt to represent Chinese sounds with our alphabet is necessarily an approximation. For example, the characters

could be romanized as gong fu, kung fu, gung foo, and so on.

To avoid confusion, the Chinese government has adopted a standard Mandarin romanization system called Hanyu Pinyin, or “Pinyin” for short. Pinyin is a good system that is used almost universally by modern students of Mandarin, and is ubiquitous in mainland China.

However, the Western world doesn’t seem to realize that there is a standard system. Westerners continue to use older romanization systems such as the Wade-Giles system, and that’s when they use any system at all. That’s why Chinese names are so inconsistently written in the West; the writers don’t adhere to the standards.

2. Some Martial Arts Use Mandarin, Others Use Cantonese

Chinese is famously comprised of many dialects. Mandarin is the official dialect of China and by far the most useful. Both systems that I mentioned above – Hanyu Pinyin and Wade-Giles – are meant for Mandarin.

Cantonese is also important for martial artists. Cantonese is spoken primarily in southern China, especially Hong Kong and Macau. Most of us know about Cantonese because it is over-represented in the West, although it may only be the 3rd or 4th most commonly spoken dialect in China.

Because Cantonese is not the national language of any country, there is no standard way of romanizing it. Two common romanization systems are Yale and Jyutping, but there are several other systems in common use.

Cantonese is commonly used for southern Chinese martial arts such as Wing Chun and Hung Gar. However, any teacher is free to teach in whatever dialect he likes. It’s not uncommon to see the same martial art under a completely different name depending on the origins of the teacher.

3. Chinese Characters Can be Simplified or Traditional

Chinese characters are the clearest way to express a Chinese name. If you can read Chinese characters, it’s best not to translate or romanize them at all. But even then, there’s a problem. In the 1950s, the Chinese government simplified the writing system in an effort to increase public literacy. Since then, there have been two sets of Chinese characters: Simplified and traditional.

Mainland China and Singapore use simplified characters, while traditional characters are used in Taiwan, Hong Kong, Macau, and many Chinese communities overseas. Both sets of characters are useful, depending on where you live or what you study.

“Tai Chi” is perhaps the best example of romanization problems. Let’s take a look at how this is supposed to be written:

The name “Tai Chi” seems to be a bastardization of the Wade-Giles form. In other words, someone saw the Wade-Giles version but didn’t understand the apostrophes or the umlaut. As a result, in the West you can see all kinds of variations: Taijiquan, Tai Chi Chuan, T’ai Chi Ch’uan, Taiji Chuan, T’aichi Quan, etc.

Some writers try to get around romanization by translating the name into English. This might work for simple names, like White Crane or Northern Praying Mantis, but Taijiquan does not translate well. “Taiji” is an ancient and complex metaphysical concept. “Quan” literally means “fist,” and signifies that it is a method of fighting. Some English translations of Taijiquan include: “Supreme Ultimate Boxing,” “Fist of the Great Ultimate,” “Supreme Pole fist,” etc. These are essentially meaningless translations, so the name is best left untranslated.

If you can’t translate the name and Chinese characters aren’t an option, then you had better pick a romanization system and stick with it.

Bring on the Names

What follows is a table of names for a variety of Chinese martial arts. Each name is written in English, romanized Mandarin and Cantonese, and both simplified and traditional characters. It is meant as an extended list of examples, not anything like an exhaustive list of Chinese martial arts. Names are sorted alphabetically by their common names, which are frequently inaccurate. When there are multiple entries in succession in a single cell, that means that there are multiple valid options.

If you’d like to know more about the information in this table, please refer to the FAQ at the bottom of the page.

What do all of those numbers and lines mean?

They tell you the tone of each syllable. Both Mandarin and Cantonese are tonal, which means that the tone of a syllable affects its meaning. Mandarin has four tones – or five, if you count “neutral.” Cantonese essentially has six tones, but it’s a little more complicated. In Pinyin, tones are expressed with little lines above certain vowels. In the other romanization systems above, tones are expressed with numbers.

If you’re only interesting in reading small amounts of Chinese in the West, tones may not matter to you. Most of the time, Chinese is not romanized with tones.

The word Quán is the most common suffix in Chinese martial arts names. It literally means “fist,” but it’s often translated as “boxing.” In reality, it means something like “way of fighting” or “martial art.” So to fully translate the name of White Crane(bái hè quán), you would actually end up with “White Crane Martial Art.” This translation is redundant, although it’s more accurate than “White Crane Fist” or “White Crane Boxing.”

I don’t think that we should translate the word Quán. “Fist” is a literal translation, but doesn’t really make sense. “Boxing” is antiquated and inaccurate, chosen by translators who were under the false assumption that Chinese martial arts are analogous to Western boxing. If you want to preserve this part of the name, just say it in Chinese instead of English.

Are there other ways to romanize Chinese? Why did you pick these four romanization systems?

Of course, there are all sorts of romanization systems, but I picked the four that seemed most widespread. For Mandarin, this is an easy decision: Pinyin is standard in China, while Wade-Giles still clings on in the West. Cantonese isn’t nearly so standardized, but Yale and Jyutping are both relatively well-known systems.

What about dialects other than Mandarin or Cantonese?

There are many dialects of Chinese other than Mandarin and Cantonese, some of which are more widely spoken than Cantonese. But Mandarin is by far the most common, and Cantonese is disproportionately well-represented among martial artists in the Western world. Most names of Chinese martial arts that you can encounter in the West can be traced to one of these two dialects.

How do I find the equivalent pronunciation in Japanese, Korean, or Vietnamese?

First, copy the traditional Chinese characters for the name you are interested in. Then paste the characters into an appropriate online dictionary. It’s important that you find a dictionary that is dedicated to that particular language, not an all-in-one dictionary like Google Translate. You’re not just looking for the English equivalent, you’re looking for how it is romanized.

Why did you choose these particular martial arts?

Chinese martial arts can be grouped together or divided infinitely. I’ve seen “exhaustive” lists and came away no better for it. With that in mind, I couldn’t include them all.

That said, it’s not hard to add more to the list. If there’s a name that you’re curious about, drop me a line in the comments section.

What about martial arts with variations of the names posted above? (e.g. Bagua Quan vs. Bagua Zhang)

This is common. In some cases, it’s the same martial art(or similar) under a different name, but there is no general rule. It may be helpful to know that Chinese martial arts tend to reuse a lot of the same words over and over. A lot of the time, the following words show up as suffixes: 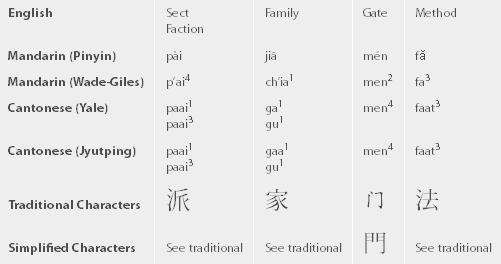 These are generic Chinese terms and not the names of specific martial arts.

Why isn’t there an English translation for X?

It’s not useful to translate every name. For example, Shaolin is just the name of a temple. It doesn’t clarify the issue any further by explaining what Shao and Lin mean. Choy Li Fut is another example of an art which is almost impossible to translate. The first two characters are family surnames, while the last character refers to Buddha. It has been said that Choy Li Fut was a synthesis of three preexisting systems, and that each character refers to one of its predecessors. The name is therefore meaningful in Chinese, but gibberish if translated literally.

Some names contain references to complex philosophical concepts, like Taiji or Bagua. Bagua can be translated literally (Eight Trigrams), but that doesn’t express the meaning behind the concept. Taiji is even more complex, and it’s pointless to translate it.

Where do you get your translations?

I use the dictionaries at mdbg.net and nciku.com, although some translations are my own.

If you have any questions or comments, feel free to post in the comments section below.