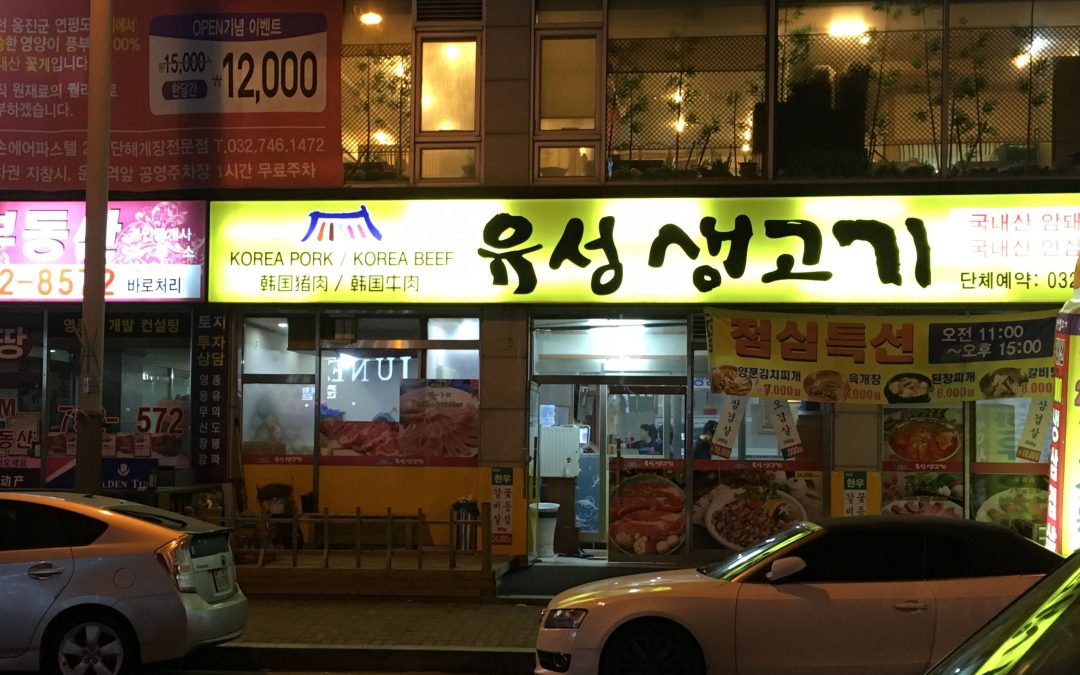 Okinawa Part 3 – One Night in Korea

As I mentioned in my previous post, I made a fairly sizable error on my way to Korea. I had my bags checked to Incheon instead of all the way through to my final destination (Naha, Okinawa). That means I had to find my bags and lug them around with me as we made our way to the hotel. Ohh well. The depth of my error wouldn’t become transparent until the next day. 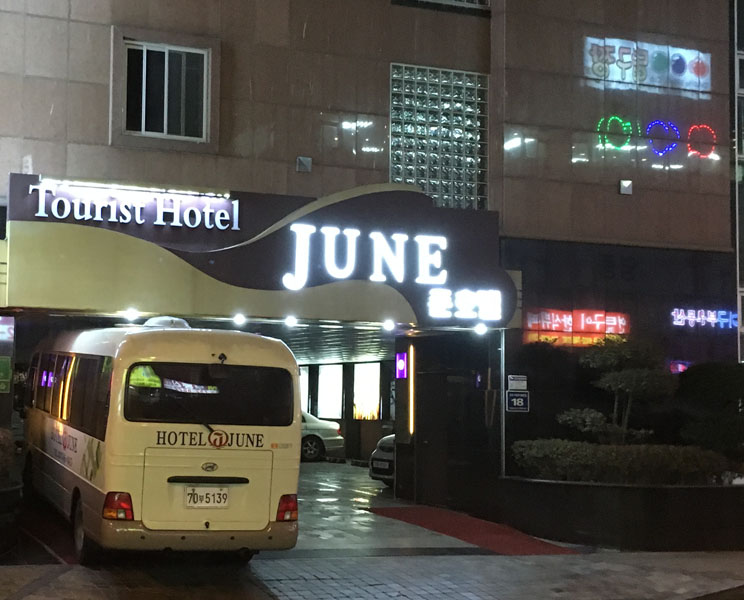 We only had one night in Korea. The plan was to recuperate from the long travel and then hit the ground running once we touched down on Okinawa itself. That didn’t leave too much time to explore, but I wanted to make sure I got out at least a little bit. We stayed at the June Hotel, which was designed to accommodate stay-over travelers. Only a select few things gave me English clues on where to go and what to do, but I did my best to adapt.

Coincidentally, this marks the first time I was ever stumped by a hotel room.

Kept in the Dark

I walked into the room and found a nicely appointed but rather dark space waiting for me. I found a pair of slippers waiting for me right by the door, so I took the hint and kicked my shoes off. I then went in and tried each lamp, flicking the switches back and forth, hoping to conjure up some light. No luck. I used my phone’s flashlight to locate a lightswitch panel (which was labeled in Korean). Despite button mashing I still could not get a flicker.

After extended wandering around, I encountered a keycard machine on the inside of the doorway. I thought this was odd since, in all my years, I’ve never been required to keycard swipe my way OUT of a room. I slipped my keycard in and, voila, lights came to life. It turns out, as an energy saving method, many Korean hotels utilize this keycard system to quickly and easily shutoff unneeded energy usage when you leave the room. The side bonus is that you always know where your card is. Quite smart, if not a little tricky.

Once I could see what I was doing, I settled in and got my first experience with a high tech toilet. Lots of buttons to push; some of them regrettable if you aren’t prepared for it.

Out on the Town

I didn’t have the time or energy to do a real investigation of the Incheon area, which was a little sad. I could tell right away there was some vibrancy in the town and plenty to see (and eat).

We visited a local shopping center and got a taste of fashion, food, and general culture. To my delight, I stumbled across a taekwondo and kumdo (kendo) dojo. It was gratifying getting a little glimpse of martial arts this early on in the trip. 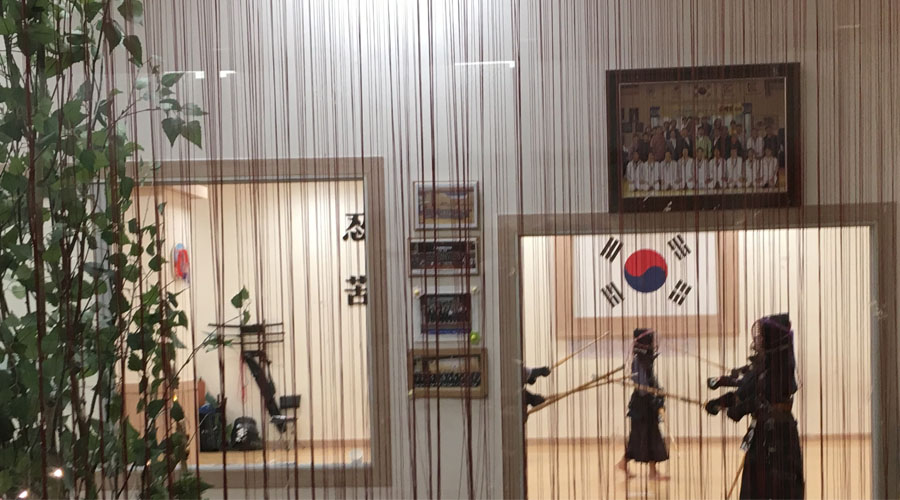 Korea has become well known as the home of professional video gamers, K-pop, and unique fashion. It also has some of the trademark “bright and flashing lights” that have made certain sections of both China and Japan famous. I quite liked it! It made me want to dive deeper into the town, but I simply couldn’t, given the activities lined up for the following day. 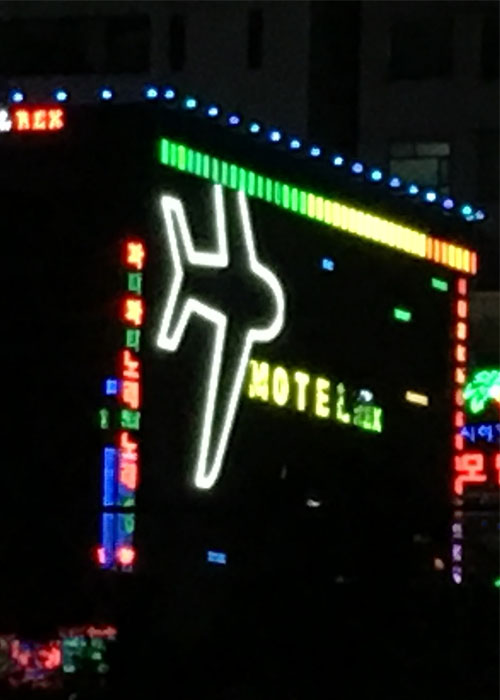 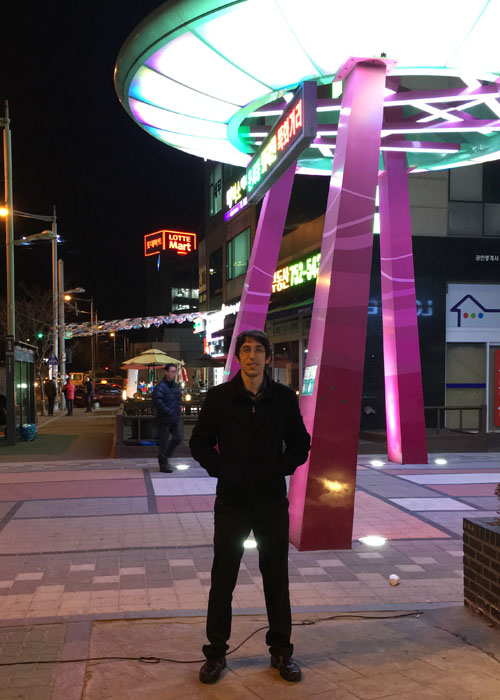 Luggage Woes at the Airport

The next morning we headed back to the airport (my luggage in tow). When I saw what was waiting for me my stomach dropped. The lines for checking luggage for Asiana Airline were monstrously long. People were strewn about the main line with carts full of luggage, looks on their faces suggesting they had been there for hours, days, weeks…who knows. I did some quick mental math and figured it would take me about three to four hours to make my way through the line, plenty long enough to miss my flight.

I told Robert and Miko to carry on without me if I couldn’t make it through, but then we noticed some ticket printing kiosks nearby (I couldn’t print my tickets out on a computer ahead of time and I was regretting it). We determined that if I printed my ticket out at the kiosk, I may be able to take my luggage to a secondary line for ready-to-board passengers. That line only looked about an hour long, which was fine. I nervously went through the digital kiosk prompts, scanning my passport in and finding my itinerary information. I got to the end of the prompts, hit “finish”,  and got a warning message: “Your ticket could not be printed, please take the following voucher to our front check in counter”. My heart sank. Failure.

I grabbed the voucher and looked back at the lines. I realized that if I jumped in the four hour line I was doomed, so I went for the one hour line and hoped for the best. When I finally got to the front, a very pleasant Asiana Airline attendant looked at me, at my voucher and passport, and quickly printed out a ticket for me and got my luggage weighed and checked. She was my absolute favorite human for awhile after that. I don’t know if I had bent the rules by going in the wrong line, but she made quick work of the situation and got me through. 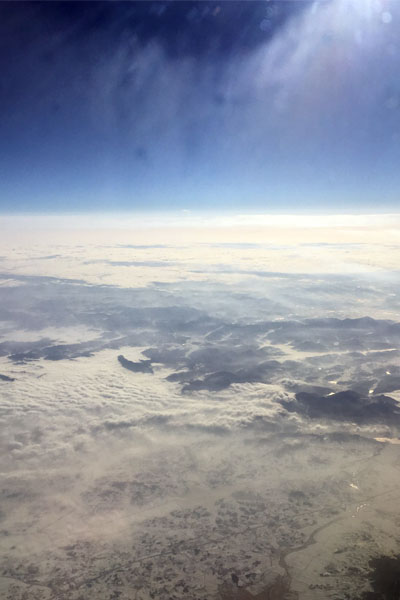 The flight from Incheon to Naha went by in a flash. After experiencing the 14 hour flight the day before, this little two hour jump was a breeze. We flew over beautiful Jeju Island, which was partially shrouded in fog, giving it an ethereal appearance. 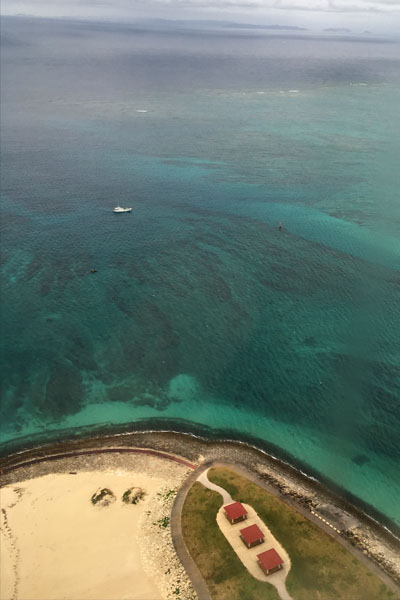 As we approached Okinawa itself, the waters became clear and blue. I eagerly looked out of the window, waiting for the first glimpse of landfall. It came in the form of light, sandy beaches and a few military installations. There was also a quartet of baseball fields on a piece of island that was clearly man-made.

A mobile staircase met us out on the Naha Airstrip. We unloaded, caught a quick shuttlebus, then arrived in Naha Airport itself. One final line awaited us to get through customs, and then we were gold.

What followed was my first time getting out onto the island, experiencing the people, architecture, culture, and karate!