Okinawa, Ikigai, and the Secrets to Longevity

National Geographic began a study in the early 1970’s wherein they identified global “blue zones”. Blue zones are specific locations that have societies of people that are longer lived, healthier, and more active into old age than the rest of the world.

Recently Dan Buettner, an American explorer and author, created a presentation discussing his research into the National Geographic blue zones. One of the locations he found most intriguing and noteworthy was the small island of Okinawa.

Watch this video as Mr. Buettner discusses his findings on why he believes the Okinawans and a handful of other cultures are so special.

There are multiple locations around the world that feature very interesting groupings of people that have achieved longevity. However, according to Mr. Bueller, Okinawa is considered “ground zero”. They have a complex social system with many built-in habits that lead to longer and healthier lives. I’d like to discuss a few of the points in the video and how they relate to the lifestyle of a martial artist.

According to Mr. Bueller, the most important keys to longevity are:

Within each of those categories Bueller features an Okinawan concept that achieves the desired results. Let’s look at the Okinawan habits and how they coincide with martial arts practice.

Okinawans utilize “hara hachi bu”, which is the method of eating until you are 80% full. Similarly, recent western studies have shown that healthy dietary habits involve eating small meals throughout the day, and not eating excessively at any one time. The Okinawan people have found clever ways of maintaining this practice, such as eating off of smaller plates.

For martial artists, filling up the “fuel tank” with proper nutrients is critical to good study. One of the worst contributions Americans (and perhaps westerners in general) have given to the arts is the ‘master’ who is extremely rotund. Many times these portly experts can barely tie their belts around their waists. You might hear pseudo-explanations about these practitioners becoming more Buddha-like in their figure, or that the eastern arts benefit from a lowered center of gravity, but that’s all really fancy ways of avoiding the truth.

The Okinawan diet is heavy in fish, fruits, and vegetables, including the bitter and scary looking Goya:

This kind of diet has helped cultures around the world obtain and retain good health. Unfortunately, I’ve heard that some western conveniences like McDonald’s are slowly starting to creep onto Okinawa, especially in the southern regions. We will have to watch carefully how the longevity and quality-of-life numbers are effected by these changes (some senior karateka I’ve spoken to believe it is already having an effect).

The Okinawans have a built-in social network of extremely tight-knit proportions. As technology increases all across the globe, humans are achieving a brand new level of social interaction. Will these online communities simulate the positive effects of Moai, or is something critical missing? We can’t be certain yet.

One thing that is certain is the kind of community that can be built in traditional dojos and study groups. As martial artists grow and train, they become closer and closer. If the group is made up of good people, they can also rely on each other and trust each other.

This is perhaps the most obvious benefit of training. The physical activity in martial arts is extremely healthy as it works the whole body. While weight lifting and running both have very important purposes, activities like kata are demanding on every muscle group in the body. One can get a cardio workout and a tension-muscle workout, not to mention improved balance, fast and slow twitch muscle endurance, and much more. 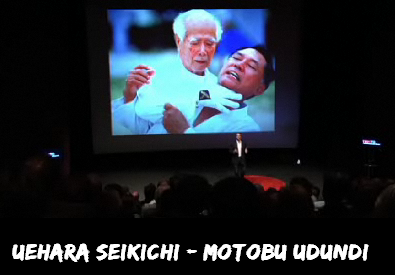 The “moving naturally” aspect of Bueller’s speech is something I find very interesting. Although some arts like karate and tae kwon do appear to move practitioners toward ‘unnatural’ stances, ultimately they are designed to teach a person how to optimally distribute weight and move from one beneficial position to another. And, with enough practice, they are to be practiced naturally. Other arts, like aikido and tai chi chuan, place an even stronger emphasis on natural body.

One of the biggest revolutions in thought in our time is the changing of emphasis from physical health to mental health in connection to longevity. The effects of negative stress and “inflammation” are cited more and more frequently as the cause of early death and lowered quality of life. One of the most important methods for counteracting that is ikigai, a sense of purpose.

Of course, not every purpose is ikigai. It’s quite possible to be driven and dedicated but without experiencing the true nature of ikigai. Ikigai is something that brings joy and contentment. It fills a person with resolve and a sense of satisfaction in what they are doing. Most of all, it brings happiness. I contend, as I always have here on this website, that martial arts can be that for some people. Or, at the very least, give them the physical and mental tools to find an ikigai in there life, and keep them active enough to continue experiencing it.