I never had the chance to personally train with Seikichi Odo Sensei. This is very regrettable. But don’t we all feel that way about those seniors who have passed before us? I bet there are men who Odo Sensei would have loved to train with, but never got the chance. Luckily, I have had the chance to study with excellent instructors who spent extensive time with Odo Sensei, and who patiently entertain all of my inane questions. I have also had the luxury of pouring over tape of Odo Sensei training. Here are some observations for those inclined to learn more about those who came before us. 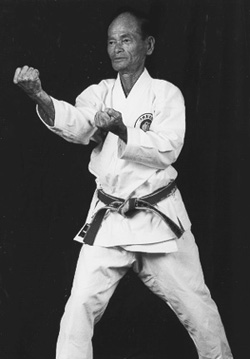 In these days of martial arts mayhem, it can be very difficult discerning who to trust and listen to. For example: who am I? Who cares? I’m not anybody of significance. But Odo Sensei was someone who was respected globally for his skill and contributions to the martial arts. He was commonly cited as one of the greatest weapons practitioners of his era. As Judan and successor to Nakamura Shigeru, Odo was responsible for the proliferation of Okinawa Kenpo. That’s significant.

Odo Sensei was also renowned for having a kind spirit. Of the many stories I’ve heard about him, they all revolve around the positive influence he had on training and growth.

One of Odo’s trademark characteristics was his penchant for courtesy and saving face. If a student were to ask him if they were doing a technique “right,” Odo would rather simply say yes than suggest they were doing something poorly. But if a student were to ask how Odosan did a technique or advice on ways to improve it, then he would feel comfortable teaching and transmitting knowledge. By behaving in this way, Odo Sensei not only taught students technique, but also ways of communicating with diligent reshiki.

Odo Sensei’s techniques seem a bit odd to modern eyes. His body is very relaxed and his motions seem almost lackadaisical. These days many people fall into two camps – the traditional karate/taekwondo stances and strikes, or the free-range mma and judo scrap…neither of which resemble Odo’s “casual” approach.

Relaxation is key in arts such as Aikido, but even so-called hard arts utilize it at high levels. Odo Sensei was constantly integrating his karate to such a degree that his movements became the natural body language of his every day living. The focus of his strikes and techniques were sharp upon impact, but they were surrounded by motion that was so well practiced that it seemed nonchalant.

Here is a video of Odo Sensei engaged in one of his favorite activities – teaching.

To me, Odosan embodies the unpretentious unity of martial arts into every day life. His karate was an expression of who he was, not of who he could hurt. While I’ll never know him personally, my pursuit to better understand him has led to deeper learning of Okinawa Kenpo. Isn’t it interesting how true teachers never stop teaching, even after their time on this earth is spent?