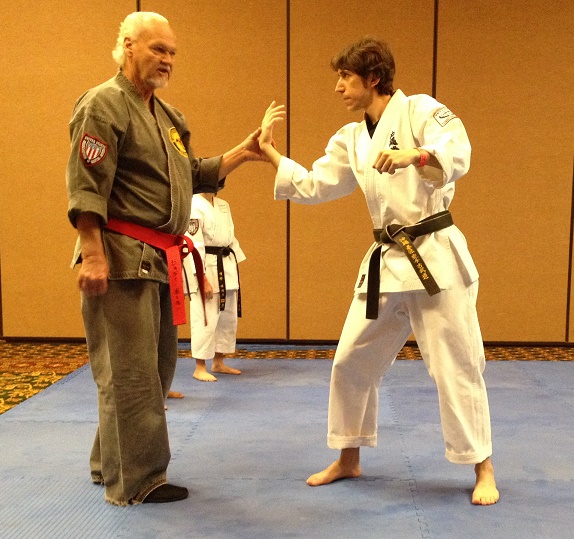 I’ve had the good fortune of training with Jody Paul Sensei for over a decade. He has been a staple figure at the International Karate Kobudo Federation’s quarterly training events for as long as I can remember and has been a close and loyal friend to my primary instructors, Bruce and Ann Marie Heilman. Paul Sensei is a unique character, having trained directly with Toma Shian (Seidokan), Uehara Seikichi (Motobu Udundi), and Odo Seikichi (Okinawa Kenpo). Now, sadly, he is in serious medical condition and could use the support of the martial arts community.

(To Learn More About Paul Sensei, Read This Interview)

What Happened to Jody Paul Hanshi

While driving near his Georgia home a deer sprang out from the side of the road in front of Paul Sensei’s car. Attempting to dodge the impact, Paul Sensei swerved but lost control of the vehicle, causing it to roll multiple times. The impact caused serious damage to his spine and neck. A series of emergency surgeries saved Paul Sensei’s life, but left him paralyzed from the neck down. He is in stable condition, rotating between assisted breathing and self-powered breathing. He is struggling to communicate under his own power and needs attentive care to avoid atrophy, bed sores, and blood clotting.

How We Can Help Paul Sensei

As a result of Paul Sensei’s extensive military career we are trying to garner appropriate aid from Veteran’s Assistance. However, due to the extent of care needed to help Paul Sensei, additional funding is urgently needed. Our goal is to provide Sensei with the best possible chance for recovery and aid in his comfort and ability to communicate.

We have started a fundraising campaign on GoFundMe.com, a very reputable donation management website. Using the link below, please visit the fundraiser and provide whatever assistance you can:

All money collected through this fundraiser will go directly toward medical equipment and bills associated with Paul Sensei’s recovery. Usage of funds will receive direct oversight from Bruce Heilman, Ann Marie Heilman, and myself.

Together we can provide a better quality of life for Paul Sensei, and, with any luck, give him the opportunity to share his knowledge once again.

Paul Sensei’s martial arts career began while stationed in Japan. He studied Shorinji Ryu under So Doshin (and one of So’s senior students). Once transferred to Okinawa, Paul Sensei continued his journey with Uehara Seikichi, Toma Shian, and Odo Seikichi. Mr. Paul was known throughout the island and had the opportunity to meet and train with a myriad of important karateka. Since that time he has worked tirelessly to maintain contact with Okinawa and spread his art here in the United States.