Recently singer-songwriter Chris Brown was charged with assault on girlfriend Rihanna (singer). Here are the details:

“They began squabbling after leaving Clive Davis’ pre-Grammy party late Saturday. Shortly after midnight, things blew up. Brown pulled his silver Lamborghini to the side of a street in L.A.’s Hancock Park neighborhood. That’s when, per the source, Rihanna grabbed the car keys and tossed them out the window, sending Brown into a rage.

He tried in vain to find the keys, then came back to the car, put his hands around her neck and, according to the insider, said, ‘I’m going to kill you!’ According to the source, the 20-year-old ‘Disturbia’ singer told police that she lost consciousness, and when she awoke, Brown had fled.” – E Online 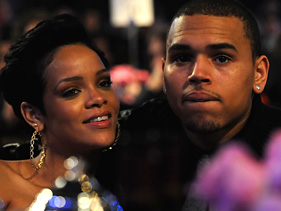 Here are some further details on the physical nature of the assault:

“The source told Access Hollywood that Chris Brown allegedly hit Rihanna with his fists and bit her during the alleged incident, which took place around 12:30 a.m. on Sunday.

Brown, 19, was arrested on Sunday and charged with felony criminal threats. He was released on $50,000 bail.” – MSNBC

Most news sources also gave two other bits of information:

“In a 2007 interview with Giant magazine, Brown said his mother had been physically abused by his stepfather.

‘He used to hit my mom,’ he was quoted in the article. ‘He made me terrified all the time, terrified like I had to pee on myself. I remember one night he made her nose bleed. I was crying and thinking, ‘I’m just gonna go crazy on him one day … ’ I hate him to this day.’

In the same interview, he said he had studied martial arts, which he used to defend himself once in a fight with several classmates. Brown said after his mother broke up the fight, he urged her not to go to the police. ‘Don’t go to no cops pressing no charges,’ he reported begging her, ‘like we don’t do that in the hood.’”- Times Dispatch

This is extremely unfortunate. Cases of domestic violence are always outraging, and when it occurs between high profile individuals the consequences can be widespread. Celebrities carry the responsibility of maintaining personas worth emulating, and when the wrong message is sent (like in this case), the trickle down effect can be very undesirable.

There’s little doubt that Chris Brown wouldn’t want his actions to influence fans negatively (or impact his career negatively), but should he be officially convicted of these charges, he’ll become part of a very unfortunate ‘fraternity’ of musicians who are infamous for inappropriate and dangerous behavior.

Although Rihanna’s health (and proper repercussions toward Brown) are the most important factors here, there is something more subtle that concerns me. Almost every news source I encountered while investigating this case vaguely mentioned something about Chris Brown’s martial arts practice. For example:

“Brown, known in addition to his singing for his athletic feats of dancing — he has performed upside-down — previously said he studied martial arts, according to the New York Daily News.”

What are they implying? What is the point of including this piece of information? It seems relatively harmless, but the cultural implications are actually much broader than we might think.

First, they might be suggesting that Chris Brown’s martial arts experience aided in the effectiveness of his assault on Rihanna.  That would be a legitimate aspect of the story if any reports indicated something other than a barbaric act of violence.

The three types of attacks cited are choking, biting, and hitting with the fist.  Which of those stands out as martial in nature? I would understand if Brown were using high kicks or perhaps joint locks, but the kinds of attacks mentioned are indicative of an enraged man using brutal, untrained methods to cause damage. I think it’s clear that martial arts were not involved in the physical act of this attack.

Second, they might be suggesting that Brown’s martial training turned him into an aggressive, violence-prone individual. If this is the case, then it demonstrates that the negative sterotypes of martial arts are as strong as they ever were.

With karate or taekwondo schools in every small town in America, one would think that information regarding martial arts would be wide spread. One would also hope that, while many schools might be suspect in quality (aka mcdojo), they would at least teach the essential maxim of ‘defense only’. Just from my personal experience, I think that most do. Certainly there are plenty of exceptions and there ARE violent martial artists, but not nearly enough to suggest that martial arts are a cause of widespread violence, especially in domestic cases. Sadly, I think the history of abuse in Brown’s family is much more telling.

MMA practitioners should be a little worried too. Riding alongside the ‘martial art’ claim is this report from an anonymous police officer:

“According to TMZ.com, unnamed law enforcement sources said Rihanna’s contusions “look like an MMA [Mixed Martial Arts] fighter or something … [It] looked like she was growing devil’s horns.” – Mercury News

I’ve seen a lot of MMA fights and a lot of COPS. Getting hit in the face always looks roughly the same. Which, like I said earlier, is another obvious reason martial arts weren’t involved with this case – there were no armbars or ankle locks here that would be indicative of MMA.

Ultimately, I think the news sources would simply defend themselves by saying ‘well this was a case of violence…and martial arts are about violence, so that warrants the  connection.’ For them, Brown’s martial arts experience was a juicy nugget they found stashed away in a two year old interview, but perfect for his recent troubles. To me, in a case that is all about sending the wrong message, this is yet another message that shouldn’t have been sent.