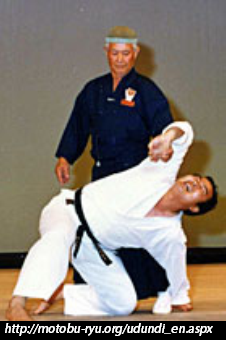 Mai no Te – The Dancer’s Hand

” A long time ago, there was a karateka whose name was Machaa Buntoku or Kinjo Matsu in Itoman village, Okinawa. He was born in 1867. People said that he had been practicing karate in Fuzhou city, Fujian province, China and mastered the fighting arts in depth.

Hearing about Machaa Buntoku, Miyagi Sensei, the founder of Gojuryu, visited him together with Sensei’s disciples, Jin-an Shinzato and Seiko Higa. Miyagi Sensei asked him to show them his best Kata that he mastered in China. Then Machaa Buntoku put on Hachimaki (=headband) and performed a strange dance in front of them. He danced and danced. Seeing his strange dance, Seiko Higa thought this old man must be crazy or mad because of his old age. Jin-an Shinzato who was yet young at that time lost his temper to see his dance and told him “OK. Dance is enough! Show me your fighting technique! I will be your opponent.” Shinzato delivered a karate blow at him, but Shinzato was thrown down by the dancing old man and hurt his back. He lost face. Everyone there felt awkward about it, so they bowed to the old man and went home. On the way home no one spoke.” –  by Kiyohiko Higa, Translated by Sanzinsoo

Dance has always been an important part of Okinawan culture. Ranging from the famous Eisa Dance During Obon Festival to rarely seen village dances, the breadth of Okinawan musical expression is almost as diverse as it’s martial arts. What many people don’t realize is that martial arts and dance did not simply coexist throughout Ryukyuan history, but came together in very important ways so as to preserve the essence and spirit of Okinawa itself.

In this article we’ll explore how and why dance and karate intermingled. We’ll also discuss how the concepts preserved in dance are important to the understanding of karate as a complete life protection system.

Our study begins primarily in the 1600s. Before that time both dance and martial study existed, but we have very little information on how they might have influenced each other. However, in 1609 a cataclysmic shift in Okinawan culture and history occurred, bringing on a sharp need for secrecy and subterfuge.

The Shimazu Clan of Satsuma, Japan had a long standing claim on Okinawa, but their concerns on mainland Japan never allowed them to focus much on the small island chain. Unfortunately, as the Warring States Period dragged on and Tokugawa Ieyasu made his push for dominance over Japan, the Satsuma Samurai found themselves on the losing side of the Battle of Sekigahara and ultimately the war. Ieyasu, once comfortable in victory, realized the bubbling cauldron of potential trouble that the Shimazu represented. Instead of allowing them to fume away and scheme their eventual reprisal, Ieyasu suggested they set their sites on conquering the Ryukyu island chain to the south which had for years skirted their responsibilities and tributes ‘owed’ to the Japanese.

The Shimazu clan, seeing an opportunity to extend their influence and test their skills once again, agreed and set sail. The Okinawans, while fierce fighters and brave warriors, were under-equipped and under-manned. They stood little chance against the Satsuma fighting machine.

When the Satsuma conquered Okinawa they laid down a series of rules. First, they realized that Okinawan weaponry was already centralized around Shuri (the general populace was disarmed so as to avoid splintering factions on the island). The Satsuma decided to go one step further and remove all potential for a standing army on the island. The only individuals allowed to have weapons were the highest warrior and royal families, and most of that was just for ritual. In addition, the Japanese planted roaming informants known as metsuke to keep an eye on all Okinawan activity and either report misconduct or cut it down directly.

As a result of the Satsuma occupation the Okinawans had to be extremely cautious regarding the militaristic arts they demonstrated. Practicing tode (the predecessor to karate) and kobudo (weapons arts) became a dangerous proposition, even when training in private. As such, many teachers took their arts ‘underground’ and only studied at night or in locations away from prying eyes.

The royal court at Shuri became aware of their conundrum: they needed to continue developing their skills in order to protect the king but could not openly practice their most effective techniques. Being privileged members of Okinawan society, they still had rights to art forms like calligraphy, poetry, and dance. They decided upon an ingenious solution…bring the worlds of dance and martial arts together.

The Dancers with Dangerous Hands

“The te-waza in Tuiti are believed to arise from variations on three hand applied positions that correspond to those used in the Ryukyuan Court Classical Dances: oshi-te (forward push hands), ogami-te (supplication hands), and koneri-te (kneading hands). Positions appear in the earliest poetry collection of Ryukyu, Omorosaushi (1531-1623), and gestures seem to have been used in rituals and ceremony in ancient Okinawa. These gestures are said to have been incorporated into the court dances by Tamagusuku Chokun (born 1684), who was connected to the Motobu Udun.” – MotobuRyu.org

Tamagusuku Chokun may have been an important figure, but the overall integration of dance with martial arts cannot be traced back to a single individual. Most villages on Okinawa and the outlying islands had their own cultural dances serving varying purposes, including celebrations,  tributes, and commemorations. However, there are two specific ‘groups’ who did extensive work in building and preserving dance, and must be mentioned explicitly.

The first group is women. Ancient Okinawan culture placed women in positions of high regard when it came to spirituality, history, and cultural expression. As such, while dance was expressed by both genders it frequently fell to women to preserve and transfer forms. It was only natural then for the women to uphold dancing traditions even as the resident martial experts infused deadly concepts into the movements.

This example is the Hatuma Bushi dance executed by Chibana Kazuko:

_
The second group that requires further mention is the Shuri court. The court eventually involved individuals like the great Matsumura Sokon, but was centralized around the Motobu family. For generations the Motobu’s were responsible for the protection of the king and served as his closest aids. They often traveled with him and were always present during court events. The Motobu’s also represent the longest discernible linear lineage in Okinawan karate history. They developed and preserved Motobu Udun Di, the Palace Hand.

The Motobu’s were an interesting group because not only did they have to protect the king, but also had to put on impressive demonstrations whenever Chinese Envoys came around. Even though Okinawa was dominated by Japan after 1609, trade with China still took place. This was unusual since economic and political relationships between China and Japan were extremely strained at this time. As a solution, the Japanese and Chinese played a clever game of look-the-other-way while on Okinawa so as to continue trading with each other through the Okinawans. As we’ll see, that continued connection to China was integral in the martial/dance development of Okinawa.

Flowing Fundamentals from Across the Sea

Many of the connections between dance and tode seem to relate back to fundamental Chinese sources. The effects of Chinese chuanfa on tode is undeniable, and the flowing grace of Chinese techniques seem to have lent themselves naturally to dance. The Chinese families who settled on Okinawa (predominantly in Kumemura) were heavily involved with court life. Therefore, it is a likely possibility that dance and martial arts were simultaneously influenced by the respected Chinese residents.

One important aspect of integrating Chinese elements into dance and tode was the full range of effective damage those techniques allowed. The royal court and guard were responsible for a wide variety of activities, ranging from killing intruders and pirates, to subduing rabble-rousers, to performing for Chinese Sapposhi (dignitaries). As such, they needed a full arsenal of techniques that could quickly and effectively activate pain compliance, mechanical compliance, or lethal force (very much like modern day police officers). In fact, there was an element of honor in control specifically associated with the royal family’s martial practices:

“In addition to the hard techniques of strikes and kicks, Motobu Udundi had a system of joint locks and throws called Tuiti . Among the Ryukyuan Royalty, use of  Tuiti was passed down in secret only Udun among the Motobu. The aim of Tuiti  is to subdue an opponent without causing harm, in the spirit of royal benevolence.” – MotobuRyu.org

The Motobu traditions were certainly unique, but the concepts of preserving tode via dance manifested all across the island.

Modern Examples of Dance in Action

Thanks to the efforts of a few skilled martial artists and Okinawan culturalists we have examples passed down to us of Okinawan dance. Even more valuable are those individuals who have preserved some of the meaning behind the movements.

Our first modern example demonstrates that tode wasn’t the only beneficiary of dance preservation; kobudo was just as positively affected. In fact, in the days of the Satsuma occupation it may have been even more important to preserve weapon arts in a hidden manner.

Next is one of the most important karateka of our time, Uehara Seikichi. Uehara Sensei was the heir of the Motobu Udun Di line (the first none Motobu to claim that title). He worked diligently to explore the connections between his art and the popular dances of Okinawa. In the following video, a skilled dancer performs Hamachidori and Uehara Sensei explains some of the most basic tuiti joint locking concepts hidden within. Uehara Sensei also executes an important footwork concept known as Tachu Gwaa in which he walks around his opponent using a very natural posture:

‘Dance techniques’ are not just relegated to graceful and slow demonstrations. When used in earnest they can express the most fundamentally effective aspects of karate. They also tend to excel at ‘chaining’, providing opportunities to strike/grab/kick/bend/push in a smooth series without pause.

Bill Hayes Sensei occasionally demonstrates a portion of technique based off the popular dance Kachashi. The intriguing thing about Kachashi is that it has fundamental movements similar to those expressed by Uehara Sensei in the video above. However, it is also considered a ‘freestyle’ dance form. Hayes Sensei uses this set of concepts to execute a string of techniques that combine striking, tuiti, kicking, and kyusho activation. Furthermore, he enters the ‘dance’ against full speed attacks.

Dance is not (and probably will never be) a well known part of karate’s history. It is not useful in tournaments and does not particularly appeal to Western sensibilities. Nevertheless, some of the most effective and important aspects of karate are contained within and understanding karate history is impossible without factoring in all of the cultural elements that were so crucial to survival on the island.

While dance is certainly not required to be a good karateka, being aware of it honors the efforts of prior generations of both men and women on Okinawa and helps modern practitioners grasp the full possibilities of the art.