Kuwa – Okinawan Hoe (And Tool of Self Defense!)

I’d like to focus this post on another one of the weapons of Okinawan Kobudo. The kuwa, or hoe, is a very common and unremarkable piece of equipment. In fact, almost every agrarian society developed a version of the hoe. It’s that level of acceptance in standard society that makes it such a great tool for self defense. Even in old Okinawa a sword or spear would draw sidelong looks from both neighbors and Japanese guard…but a hoe was completely natural and understood.

Anatomy of a Kuwa 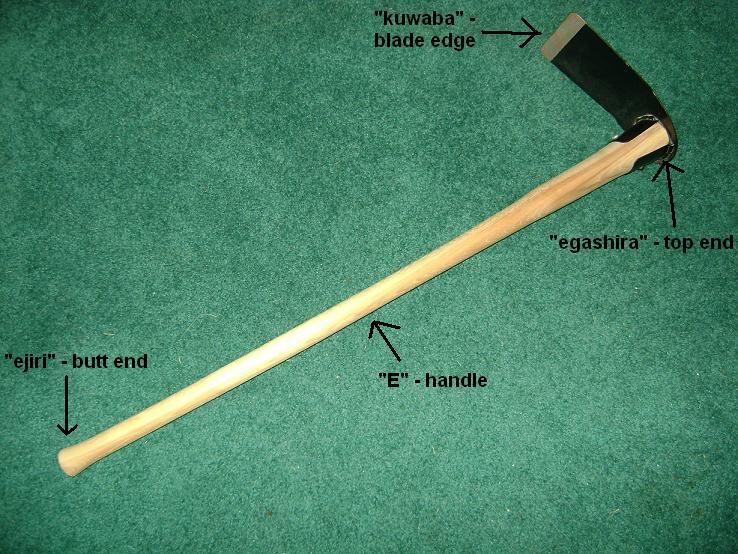 This is a picture of my kuwa, generously constructed for me by my instructor Rick Zondlo. For those of you who love details, I included the names of the parts above (impress your friends at parties). If you’d like to buy your own kuwa, find handles here and blades here.

When trying to pronounce the name of the handle “e”, say it as “ehh” and not “ee”. The rest of the parts follow suit (ehh-jee-ree, ehh-gah-she-rah, koo-wah-bah).

When people first think about using the kuwa, they usually imagine a big gashing motion with the blade edge. It would seem at first glance that this is the most devastating move for the weapon. While that is indeed an option, there are actually more dynamic tactics you can utilize.

First of all, the egashira (top end) can be used for thrusting purposes. As opposed to relying purely on large swinging motions, the kuwa can be prepped almost like a bo and thrust forward at extremely quick velocity. Due to its relatively small size, the egashira can also be pulled back quickly and “reloaded” for another thrust.

The reverse end of the egashira (as in, the side opposite the cutting hoe blade), is also utilized. Swinging motions with this part of the kuwa result in blunt trauma. This may seem less effective than a full-on blade strike, but it also allows for quick follow-up techniques. If there are multiple opponents, or reasons to hit one opponent more than once, it is critical not to get the blade stuck or snagged in the opponent’s clothes, body, etc.

The ejiri (butt end) is an equally important aspect of kuwa technique. If you have a hoe with a thick metal blade plate, it can be fairly hefty at the top. This results in slower movements, especially when compared to a perfectly balanced weapon like a sword. In order to compensate for that disadvantage, one can use the ejiri as the initial blocking and striking aspect, and then follow up with a finishing technique with the solid front end.

The ejiri can be manipulated very quickly. When holding a kuwa with the ejiri facing your opponent and the heavy metal end to the rear, the metal actually serves as a fulcrum and helps increase the speed and dynamics of the ejiri. What results is a tool that can keep pace even with fast weapons, but can then follow up with punishing, heavy blows.

Here is a look at a rare kuwa kata called kue no di. As far as I know, this is the only officially established kuwa kata still practiced:

You’ll notice a great variety of strikes used, and also some scenarios where dirt is being thrown. Remember, Okinawan self defense was never designed to play by a set of rules! Dirt, sand, and sun in the opponent’s eyes are all very viable tactics.

Now let’s take a look at the kuwa in action. For this I will be recruiting the help of Nishiuchi Sensei, as he has a great video on the topic (note: Nishiuchi Sensei’s partner has excellent hair and acting ability):

You’ll’ notice that when using the kuwa Nishiuchi Sensei initially concerns himself with controlling centerline. He’ll use small circles and blocks to clear a path to strike. After that “opener” he will come in with bigger arcing attacks. This is a key concept for the use of kuwa.

When you first start using kuwa, you are probably going to be caught off guard by how bulky the top end feels. The harder you swing, the harder it wants to drag your body weight with it. After awhile though it becomes less of a burden and you open up to the idea of using the ejiri.

If you’ve got a garden and understanding neighbors, maybe it’s time to start integrating a little technique! Show those tomatoes you mean business.