“Keep Those Hands Down!” – An Unusual Tip

When it comes to sparring, one invaluable piece of advice is to keep your hands UP. When the hands are up, they can protect against quick strikes to the head and can be dropped quickly to guard the body. Keeping the hands up is common sense to anyone who has gotten clunked in the cranium, and is the go-to stance for boxers and mixed martial artists. 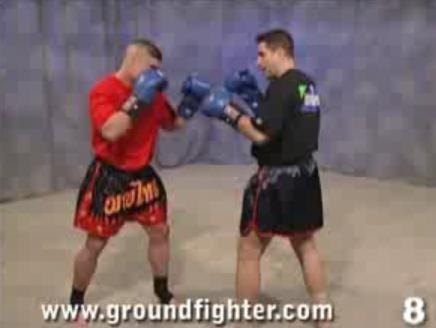 That being said, there are also times when it is acceptable to keep the hands down. Why would you want to do such a crazy thing? The answer is simple – deception.

That’s right – chicanery. misdirection. good old fashioned martial arts mind reading. Keeping your hands down during a combative engagement can open the door to all kinds of possibilities…if you’re shady enough to utilize it.

‘Hands Down’ From A Sporting Perspective

One of my favorite movie quotes comes from Spaceballs, directed by Mel Brooks. In it, Evil Dark Helmet is fighting the hero Lone Star and he exclaims – “If there is anything  I despise…it is a fair fight.” Have truer words ever been spoken?

Even in the sportive realm of sparring we are constantly trying to get a leg up on one another through speed, power, and technique. But just as important as physical prowess is mental dexterity. Think of it like a mental chess match. Some of the best fighters I’ve ever encountered were great “chess” players. I’m constantly reminded of that whenever I spar my instructor Bruce Heilman. He makes the whole concept of sparring look easy because he manages to stay one step ahead of his opponents. Distancing, timing, and strategy allow him to beat punks like me all the time.

One of the tactics he and other well-honed artists utilize is mental suggestion. For example, by keeping your hands down, you send a subtle signal to your opponent that you are open and undefended in the head region. On top of that, humans have a natural instinct to strike toward the head first (it’s a primal target, like when dogs capture each other by biting and clamping down on the back of the neck). These instincts and signals create the impulse to attack, and since you are aware of that impulse, you can have a reactionary concept already prepared.

Of course, you then need to consider who you are sparring. Is it someone who is likely to know about your tactic? Will they intentionally preempt you by faking high and striking low in an effort to stay one step ahead of your trap? If so, you’ve managed to stay ahead of their strategy again.

Think of it this way –

The Princess Bride is my favorite movie of all time. I say that without hesitation or remorse.

The layers of mental positioning can get quite complex, but luckily mushin can help quell the problem of over-thinking. Tactics like keeping your hands down and the possible outcomes of that setup can become instinctual, and when that happens, it can be an effective concept indeed!

When Fighting Isn’t A Sport

Sparring with your hands down can be a clever way to outmaneuver a sparring partner, but it can also serve a much more useful purpose.

Outside “in the real world” there are few occasions when we find ourselves with our hands up in a guard position. Whenever we are at work, out shopping, at home, taking a walk, etc. we move around with our hands down. We might even be carrying something. In these situations, if we are attacked, it won’t be preceded by bowing and gauging ma-ai. Even if someone gives us the evil eye or starts mouthing off (indicating a potential for escalation), we don’t drop back into a combative posture.

Wouldn’t it be wise then, to do some training out of the stance we would likely find ourselves in?

A lot of people think of fighting as something that happens gradually with some warning. In reality, violence tends to happen quickly with some sort of sucker technique. If you ever see two guys square off against each other, there may be chest puffing or shoulder pushing, but eventually one guy hauls off and tags the other in the face. The days of two gentlemen putting up their dukes is long gone. By taking some of your sparring time and practicing your reactionary techniques from a hands down position, you are effectively teaching your body how to react when an aggressor makes his move.

Did you ever notice that kata start with the hands down? I’m just saying.

If you get the chance, try to pay attention to other natural stances you utilize throughout the day. This will be a good way to gauge what kind of postures you might need to react from in a hurry. For example, most people fold their arms. But the real question is how do they do it – 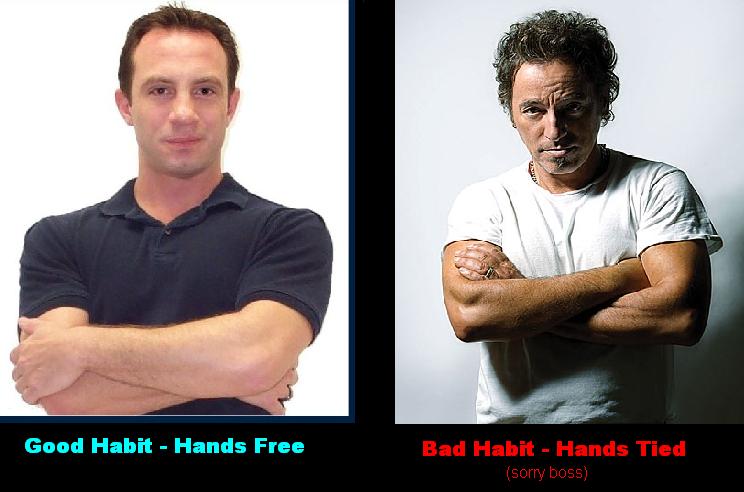 Do you know which habit you are in? The left picture is preferable because the hands are completely free to deflect attacks without a moments hesitation. The right picture, while certainly not an undefendable position, suffers from a moment of tangle. Furthermore, both arms in the right picture could be compressed or seized with a single hand from the opponent, leaving his other hand free to do whatever.

Keeping the hands down gets a bad rap because a lot of people do it for the wrong reasons. High kicking, lack of tactical understanding, and sheer laziness all result in the kind of ‘hands down’ sparring that gets people thwacked in the head. But, if you know why you are doing it and how to utilize the potential outcomes, you can manipulate hand positioning to your advantage.