I have some happy news to report.  One of my favorite all-time villains is back in the saddle, taking on a new but familiar role.

Yuji Okumoto recently developed-and-costars in a web show on Strike.TV called Katana. The story is about a ninja (boo ya!) who’s daughter gets kidnapped.  In order to save her, the ninja (boo ya!) has to go around and assassinate people for the kidnapper.

The reason I’m so pumped is because Yuji Okumoto played Chozen in Karate Kid II. With all the terrible karate kid news going around lately, this pleased me greatly.

In Karate Kid II, Chozen was a fantastic combination of smartass+badass. He added a little bit of martial arts legitimacy coming off of Johnny from Karate Kid I, who represented more of the modern USA-tournament style. Chozen’s one-liners are among my favorite from any martial arts movie.

Visit this video for some immediate Chozen action.

Yuji brings some of those same entertaining qualities to his character in Katana. Furthermore, the main protagonist and auxiliary characters have good acting chops. Although this show was clearly created on a modest budget, I enjoyed it.

The pilot episode is only 10 minutes long, but they pack in some action, plot, and humor. Also, be advised – if you go over to have a watch, you can fast forward right through the advertisement in the beginning. No need to sit through that. 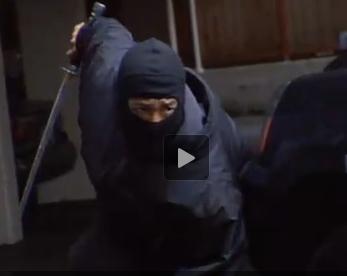