Karate on the Beach

I’m fortunate enough to find myself writing this post from Ocean City, Maryland. We are in a hotel called the Marigot and the accommodations have been stellar. During my stay here, I’ve ridden some waves (and been wiped out by some too), eaten some great seafood, and watched a bunch of people from our 11th story balcony. Is there anything more useful for a writer? 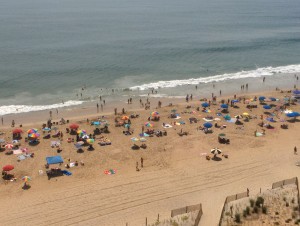 Yesterday, while chilling out on the balcony, I spotted two guys standing side by side…and bowing. I lifted a karate eyebrow and paid closer attention to them. Right before my eyes the two began performing kata seiunchin! I was pleased.

Allow me to apologize for not snapping any pictures of them, I was watching too closely to think of it at the time. It was actually a bold move on their part – they chose the middle of a crowded, public beach in the middle of the day to practice their karate. No doubt they were receiving some sidelong looks from people all around, but they proceeded anyway. Kudos to them.

Seiunchin is not practiced in my style of karate, but I’m familiar with it from my interactions with other martial artists and some of the video/book material I’ve encountered. It is an excellent kata utilized by styles such as Goju-Ryu and Isshin-Ryu.

As the two beach practitioners proceeded through the movements, I noticed the trademark deep stances and transitions used to undermine and off-balance opponents. Check out this video of Tatsuo Shimabukuro demonstrating the pattern –

As you can tell by Shimabukuro’s smooth movements, this kata can be done as mobile meditation, much like a tai chi chuan form; but it can also be “hardened” with more emphasis on hip movement and sharp strikes.

The strong sanchin dachi (stances) worked very well for the sand on the beach, as it did not dig the exponents in too hard, but provided a solid base.

The two beach karateka were helping improve each other’s technique, but I believe they were missing one very important part of training on the beach – the rhythm of their surroundings! Sensei Bill Hayes discusses beach training in his book My Journey With The Grandmaster and explains that Eizo Shimabukuro would use the sounds, sensations, and timing of the beach to adapt his kata. They would train the power of their kiai overtop waves and storms, and allow each step of their kata to be strengthened or relaxed by the flow of the waves.

Of course, the karateka I was watching couldn’t afford to rip kiai, lest they be escorted away by lifeguards. But I still think the point for them, for myself, and for anyone else considering beach training, is to try your best to forget the technique itself, and realize how it interacts with everything around you! 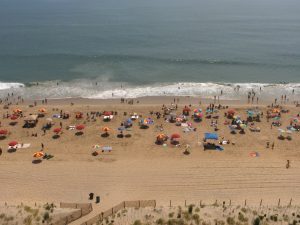