It’s a mystical business we’re in. As you know, the martial arts were born from Asian mystics and passed on to a select few remarkable individuals. Mastery over the arts will grant you superhuman powers of telepathy, iron body, and no touch techniques.

Or so we’re told on occasion.

A lot of people are surprised at the level of flimflam that is around today, and are shocked that people buy into such “astounding” feats (like this one and this one). But if you think martial arts chicanery is new, think again. Consider the 70’s and 80’s when martial arts were just starting to reach levels of high national exposure. Bruce Lee had come and gone and left a tumultuous blend of eclectic “masters” in his wake.

One of those wannabe’s was a man named James Hydrick, or “Sum Chai” as he liked to be called. 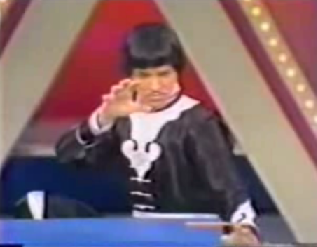 Hydrick began his rise to fame in Salt Lake City, Utah, where he started his first martial arts studio. Therein he taught students how to control and enhance their mental abilities. Through a series of impressive physical stunts (like jump kicking a basketball net) and mental demonstrations (like making heavy bags sway without touching them), Hydrick became a local phenomenon.

In 1981 Hydrick’s true star was born when he appeared on a show called “That’s Incredible”. On the show he demonstrated his best techniques and astonished audiences worldwide:

Hydrick’s combination of physical fitness, Bruce Lee persona, and mental abilities caused him to become a sensation. It didn’t stop there though:

“The tabloid newspaper The Star quickly ran an article on Hydrick labeling him “The World’s Top Psychic.” The glowing account labeled Hydrick’s powers as “incredible and staggering.” Other newspapers revealed that Hydrick could cure headaches and colds with a touch and answer questions before they were asked. A scientist and electrical engineer from the University of Utah after much testing also concluded that Hydrick’s psychic powers were indeed authentic.” – Unexplainable.net

Here was a man that seemed to bridge the gap between the real and unreal. University-proven and publicly displayed, what was there to doubt about Sum Chai’s powers?

Unfortunately there was one man floating around who kept a close watch on claims of this nature. His name was (and still is) James Randi. Aka the Amazing Randi. A professional magician turned seeker-of-facts, Randi routinely busted metaphysical hustlers, faith healers, and mentalists. He went so far as to create a $10,000 dollar prize for anyone who could demonstrate supernatural powers under controlled circumstances. (Later Randi would up the ante to 1 million dollars and establish his own educational foundation).

Taking note of Hydrick’s dramatic rise in popularity, Randi requested a demonstration on the “That’s My Line” television program wherein Hydrick could first demonstrate his abilities, and then try to recreate those results once Randi put down some simple scientific parameters. Watch what happens, and do take note of the host whom you might recognize:

Unseen in this clip are a few more details. First, Randi offered an alternative solution to the packing peanuts, in case they were indeed somehow ruining the psychic connection; he asked Hydrick to where an ordinary medical mask over his mouth and nose. Hydrick flat out refused. Furthermore, Randi had in place a sensitive microphone that was aimed at Hydrick’s mouth during a rehearsal the day before. During the test, Randi was able to detect strong gusts of air coming from Hydrick, even though they were visually undetectable.

Certainly Randi was no fool and had no concern about losing his money that day. He also went on to explain his theory as to how Hydrick operated: “Hydrick was simply blowing the page over, and he spun the pencil around by the same means. Not immediately evident are these facts, however: First, the blast of air from a half-open mouth takes time to get to the props, and Hydrick made sure he turned his head away from the pencil and the page after giving a sharp puff of air, so that he was facing away when the action occurred. Second, one blows not directly at the prop but at the table surface” – James Randi

The rolling dowel trick as seen in the “That’s Incredible” clip was also easily explained. The wood on which the dowel moved was slightly concave. As the dowel would reach the far end from the initial roll, it would slow down, allowing Hydrick to mentally “stop” it. Then he could draw it back since the dowel was naturally inclined to roll backward. The concavity was so slight however that the friction of the wood would allow it to stop at the close end without settling back into the middle.

Seemingly foiled, Hydrick began to realize his time was limited and that he had to make one last effort to regain his fame. A few month’s after “That’s My Line” he agreed to another test, this time with magician and investigator Danny Korem. It was during this interview that footage of Hydrick’s martial arts operation and personal physical prowess became available. It was also the last straw for his credibility:

In a move that is actually quite surprising for con-men, Hydrick fessed up to the ruse. He explained his system and his personal background.

As many manipulators and con-artists do, Hydrick came from an imperfect childhood wherein he was starved for attention. he also fell into crime and used his abilities to preserve his own safety in jail. It was this combination of want and reward that led him to create Sum Chai.

Currently Hydrick is serving jail time as a registered sex offender in possible connection with his kung fu students.

Certainly James Hydrick can serve as an excellent study in the mystery of the unknown and the willingness of people to believe. Furthermore, we should take this incident as a stern warning when studying the arts to question what we see and attempt to understand why we do what we do (and how we do it). Lastly, we should be very careful as to what claims we make, as James Randi is still alive and ready to make us prove it.