As you might recall, there is a new Karate Kid movie in the works. It was recently announced that Jackie Chan has been slated to play the mentor, aka, Mr. Miyagi.

“Jackie Chan is in final negotiations to join the Columbia Pictures remake of “The Karate Kid.”… Set in an exotic Asian locale, the new film will borrow elements of the original plot, wherein a bullied youth (Smith) learns to stand up for himself with the help of an eccentric mentor (Chan). Chris Murphy penned the screenplay.” – Variety 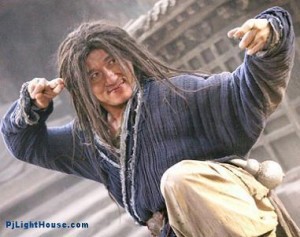 Let’s all get together and have a John Madden, state-the-obvious moment: “Jackie Chan…here’s a guy who’s not even Okinawan…or Japanese.”

How can you have a Chinese man playing a Karate Master? The explanation is simple – the new Karate Kid will be set in China, rather than Japan or Okinawa. In order to ramp up the far-east drama, Will Smith and Company decided to shoot in Chinese locales that will include, but will not be not limited to, Beijing.

Will Smith explained his decision making process for choosing China:

“We’re making it with the China Film Group, so it’ll be based in Beijing,” he said of where the modern version of “Karate Kid” will take place. “Mr. Miyagi was originally Japanese, so there’ll be a Chinese adaptation to it.”

On the possibility that many will question how could Karate which is a Japanese martial art be brought to China, Smith reasoned that although karate was developed in Japan, it is based on Chinese fighting style, Kenpo. “Fortunately, karate is originally a Chinese art form,” he said, “so that’s the area we’re playing around in.” – Japan Probe

Will Smith is a cool guy, but unfortunately his excitement for this project has pushed him forward before doing any deep research of the subject matter.

Despite what Will says in his quote, Mr. Miyagi was not originally Japanese. He was Okinawan. If you recall in the second movie, Miyagi and Daniel travel back to Miyagi’s home town, Tome Village. This was a small farming/fishing village found near Kadena Airbase.

Pat Morita, the ACTOR who played Miyagi, was of Japanese descent. This is an important cultural note because everyone involved in the original Karate Kid production recognized that a Japanese actor was playing an Okinawan role. There was a distinct and respected difference. Anyone who has studied asian culture for awhile will know that Chinese, Japanese, Okinawan, Korean, etc. people don’t particularly like being called something they aren’t.

Second, Will Smith states that karate is “originally a chinese art form.”  This is a gross simplification of the way martial arts developed in the east.  Karatedo certainly was influenced by Chinese arts, but it was not a matter of direct lineage back to China.

Satunuku “Tode” Sakugawa and Kanryo Higashionna were some of the earliest recorded martial practitioners on Okinawa, and were also instrumental in the fusion of Chinese arts into indigenous Okinawan arts (then known as Te).  Sakugawa reportedly learned from a Chinese envoy named Koshokun, and eventually would travel to China itself to pursue the ways of Chinese Kempo. Upon his return he continued mixing his new found knowledge with local arts and formed Tode (hence his nickname).

Kanryo Higashionna traveled to China as well and allegedly studied under a master named Ru Ru Ko. When he returned he worked to develop a new system that combined both hard and soft elements. It eventually became known as Naha-te.

From there, more and more generations continued to learn and mix different fighting styles as masters from different countries (Japan, Korea, etc.) visited/moved to Okinawa (or conversely, Okinawans visited/moved to other countries). “Bushi” Matsumura eventually instilled a sense of Japanese Bushido in his art through Jigen Ryu swordsmanship, along with elements of chinese arts, and become instrumental in the creation of Shorin-Ryu karate.

Take this confusing mishmash and multiply it by 100. That’s the true nature of how karate was created. Karate was not, and will never be, a pure chinese art form. Therefore, making a movie in China and calling it “The Karate Kid” is insulting to the rich martial history that each of the asian countries has woven over the centuries.

Jackie Jumping On Board

When it comes to the choice of Jackie Chan in this roll…doesn’t it feel a little forced? Jackie Chan is not the only Chinese actor in the world…couldn’t we have gotten Pai Mei from Kill Bill? 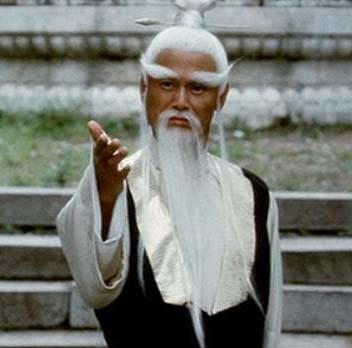 Just kidding, but I did love that character.

The angle they are taking with this movie throws out all concern for subtlety in favor of box office $$.  Think about how neat a period piece could have been. They could have done a movie about Kanryo Higashionna traveling to a mysterious and intimidating China and seeking out the elusive Ru Ru Ko. They could have even taken creative liberties with the story because actual details are a bit sparse.  Of course, if they did that, they couldn’t have used The Karate Kid name as a vehicle for Jaden Smith.

The more I see and hear about this movie, the more it concerns me that we will eventually see a box package of the original three movies combined with the horrible Hillary Swank remake and then this.