This is a continuation from Part 1 of the interview with Patrick McCarthy. McCarthy Sensei is ranked 8th Dan and is a well known author as well as the developer of Koryu Uchinadi.

MA: What was the impetus for re-writing “The Bible of Karate” into the new “Bubishi Classic Manual”, and has it been well received? 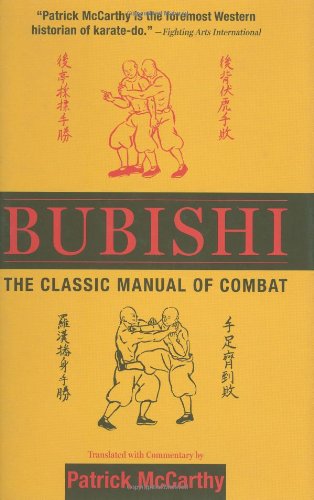 PM: The Bubishi has been one of Tuttle’s best-selling martial arts titles in the past and I think my publisher got wind of the fact that I was planning to produce a Bubishi Companion text. Hence, asked if I would consider revising my original work. Anyway, that’s what my attorney told me. Based upon this, I produced the revised edition, and was very pleased with the final outcome; FYI, the Bubishi Companion text is still in the works.

MA: Speaking of the Bubishi, what roll do you see hakutsuru (white crane) and the Fujian Province playing in the development of ti (early karate)? Which hakutsuru kata on Okinawa are generally considered the most genuine? [Note: Hakutsuru is one of the major subjects discussed in the Bubishi]

PM: Genuine is a relevant term! Like lineage and culture, genuine doesn’t necessarily mean functional. I’ve witnessed a lot of “genuine” Japanese and Okinawans who came from impeccable lineages and couldn’t fight their way out of a wet paper bag! I call such folks, “re-enactors,” not totally unlike the Medieval Re-enactors Groups; most, not all, pay remarkable attention to various cultural details, and have the best uniforms, etc. The only one thing lacking is their functional fighting skills.

As a style Hakutsuru (i.e., Yongchun Crane), played an important role as one of the precursor methods from which several Okinawan lineages trace their origins. As a kata (e.g., Sokon’s Hakutsuru, etc.) however, I think far too much fuss has been made over its form with out understanding its function. Much of what I’ve seen being promoted as “authentic,” falls far from being functional. Those traditions established in and around the Matsuyama Park district of Naha’s Kume Village (i.e. Wai Xinxian, Iwah, Aragaki Seisho, Kojo Taitei, Xie Zhongxiang, Higaonna Kanryo, Maezato Ranpo, Matsuda Tokusaburo, Nakaima Norisato, Sakiyama Kitoku, and Wu Xianhui, etc.) and that of Uechi Kambun appear to come down from this lineage.

One of the difficulties in tracing exact lineage is the different cosmetic appearance of the style. An example of how styles, which come from the same progenitor source, change is found in detachment, the passing of time, confusion and the arrival of rule-bound practices, which emphasized form over function.

MA: Your travels took you not only to your main areas of study (Okinawa and Japan) but also to Korea, Taiwan, Southeast Asia, and China. What were you hoping to find during these excursions?

PM: Similarities, differences and contextual premises, in order to corroborate my theories and bring more meaning to what I was studying. 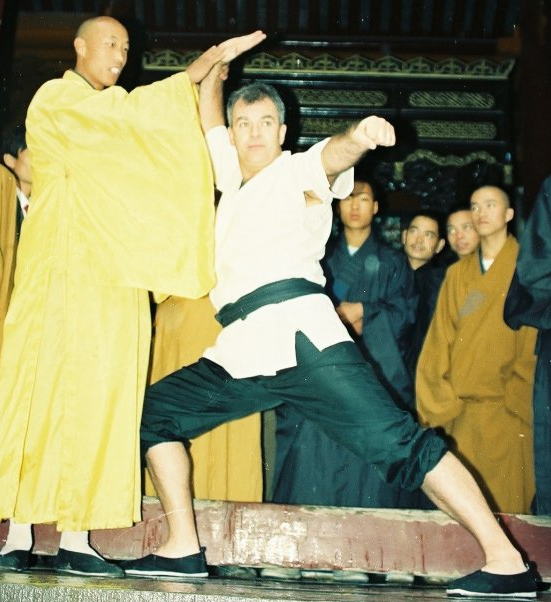 MA: Could you share an anecdote from those times of an experience that you found to be particularly enlightening or humorous?

PM: In November of 1990 I traveled from my home in Japan to Fuzhou, Fujian Province, China. The local martial arts association was hosting an international competition, preceded by a week long symposium with many of its most senior masters. Amid the several foreign countries partaking in the martial arts festival was a Japanese delegation with members from various fighting arts. One evening in the banquet hall after dinner, several of the groups were enjoying, “a few drinks,” and exchanging stories. In a rather lively conversation, “alleging that the Japanese misunderstood the original fighting arts of Shaolin,” one of the Chinese delegates come out with something like, “…for example, jujutsu is an application-based practice but without our old solo routines (kata), and yet karate has preserved our old routines but still don’t understand their application!”

The comment was greeted with a roaring silence, until one gentleman from the Japanese delegation responded with, “are you suggesting that each of these arts is a smaller part of a larger whole, and incomplete in itself?” As the Chinese gentleman skulled the last of his jiu (Jiu= liquor), he proudly blurted out, “Karate and jujutsu both trace their roots back here to our Fujian-based Shaolin practice, therefore, wouldn’t you all just be better off studying our original art?”

Historically, I think the intoxicated Chinese gentleman was referring to Fujian-based Shaolin arts as the progenitor to which karate kata traces its roots, and Chen Yuan-Pin (aka Chin Gempin/1587-1674) as the Fujian-based martial artist said to have influenced the development of Jujutsu by his mid-17th century visit to Edo (Tokyo) and subsequent interaction with the Samurai class (i.e., Fukuno Hichiroemon, Isogai Jirozaemon, and Miura Yojiemon, who later influence the establishment of Fukunoryu/Ryoi Shinto Ryu, Miuraryu Yawara and Kito Ryu Jujutsu).

What happened next between a couple of emotionally charged martial artists at the table was, for me, nowhere near as important as the BFO (Blinding Flash of the Obvious) I experienced that evening. Learning that Fujian-based quanfa served as the progenitor from which came both karate kata (form) and jujutsu oyo (function) it stood to reason that the contextual premises and underlying principles which shaped this original art should also apply to any and all derivatives, including today’s practices. Furthermore, being able to prove such a thing would surely help resolve the terrible ambiguity shrouding insight to the contextual premises and application practices of kata as understood in modern karate.

This not only formed the basis from which my obsession with studying the original Fujian-based quanfa practices unfolded, but also revealed a crucial link between form (karate kata), function (jujutsu oyo), and their shared Shaolin heritage.

MA: I’d like to take a closer look at some of your main instructors. Sugino Sensei was an extremely well respected budoka, and subject of the article “The Last Swordsman”. What was training with Sugino Sensei like? Did he provide any unique glimpses into the world of Japanese Koryu?

PM: Sugino Sensei was a delightful person and it was a wonderful opportunity to be one of his direct students. In spite of also having trained Muso Shinden Eishin Ryu and ZNKR Iai under Izawa Takehiko most of my formal Koryu training was experienced under his tutelage. Like all Koryu, Tenshin Shoden Katori Shinto Ryu uses identifiable attack scenarios and timeless prescribed application practices to effectively negotiate them. I could tell you many wonderful stories about this fascinating teacher but it is understanding this premise that Grandmaster strengthened my understanding of kata.

MA: Did Inoue Sensei discuss his Ninjutsu connections frequently, and did you get a chance to experience those methods during your kobudo training with him?

PM: On many occasions Sendai discussed training under Fujita Seiko, Shiyoda Gozo, Taira Shinken and Konishi Yasuhiro, and what a collective impact it had upon his learning. I used to meet Sendai early every Tuesday afternoon before regular training at the Shibuya dojo to serve him tea, and listen to him talk about his history. From time to time he would lead us through various Ninjutsu-based practices, including shuriken and tactical application of pressure points.

PM: Not at all … only wish I was bold enough to wear the Leopard mask that came with them ; – )

MA: These days you are touring quite frequently to help improve people’s understanding of Uchinadi and karate in general. Where have those travels taken you, and where might people contact you if they are interested in such a seminar?

PM: I like to think of KU as a system of application practices which can fit easily under the foundation of any karate style, and radically improve the overall curriculum, without adversely effecting its cosmetic appearance.

I’ve been invited to teach KU TPAD’s all over the world ranging from North & South America, Russia, the UK, and the EU, to Africa, Japan, China, SE Asia, New Zealand and Australia. For anyone interested, I can be contacted c/o admin@koryu-uchinadi.com but cannot always respond immediately. Alternatively, it’s best to contact our American Shibucho, Sensei Darrin Johnson c/o darrinj1969@mac.com.

MA: Many thanks McCarthy Sensei for your participation in this interview and for your tireless efforts to help reveal and preserve the true nature of traditional martial arts!