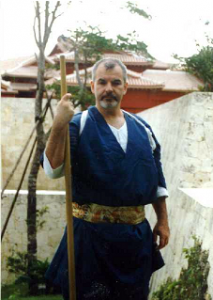 It’s an honor to present this interview with Patrick McCarthy, 8th Dan and founder of Koryu Uchinadi. 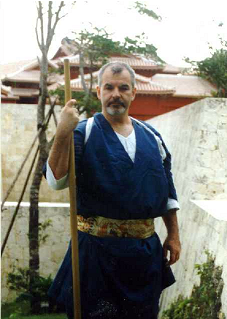 McCarthy Sensei is one of the world’s leading investigators in classical martial arts. He has traveled to many countries and for decades has acquired knowledge and information from some of the top instructors in various classical arts, putting together an innovative system known as Koryu Uchinadi (ko=ancient, ryu=style, uchina=okinawan people, di=hand).

McCarthy Sensei is a noted practitioner of Okinawan Kobudo and Karate but is also a cross trainer, integrating modern ideas and techniques into his personal skillset. He has proven himself in the realm of competitive kickboxing as well as traditional tournaments.

The following interview grants us a peek into some of McCarthy Sensei’s ideas behind martial training, as well as some of the insights granted to him by his highly skilled instructors.

MA: McCarthy Sensei, what got you into martial arts in the first place and how old were you when you first started studying seriously?

PM: When I was nine years old a highly motivational documentary film was shown at my primary school. Produced by Josef Reeve, for the National Film Board of Canada, it was entitled, “Road to the Olympics,” and highlighted Canadian Judo Champion, and silver medalist, Doug Rogers. I joined the Saint John Judo club immediately after that.

MA: Could you provide a brief overview of your training history and main instructors?

PM: I have learned from many teachers over the years but I think those who most influenced me taught me to learn for myself; John Grosdanoff [high school wrestling coach], Tiger Thompson [boxing coach], Wally Slocki [kumite coach], Sensei Richard Kim [principal karate teacher], Prof. Wally Jay [jujutsu instructor], Donn Draeger [Budo culture], Sugino Yoshio [Japanese swordsmanship], Takada Nobuhiko [shoot fighting], and Kinjo Hiroshi [karate teacher]. If you’re interested, here is a Facebook link to some of the many sources I came into contact with during the Japan years. [Note: To learn more about McCarthy Sensei’s background, visit his biography page here.]

MA: What was study like under Kinjo Hiroshi Sensei? Was his focus on sparring/kata/application/etc? 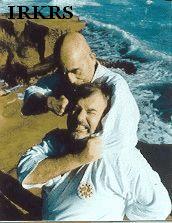 PM: Keeping in mind that I was already a 5th dan and 31 years old when I met O-sensei (who was then in his late sixties), learning under him could be likened to being a university student; the lecturer delivered the target lesson and it was up to me to do the required study (training) in order to achieve the required outcome. Following this, O-sensei would check my progress from time to time and make corrections as required. His focus was always upon technique, application and contextual premise.

MA: It is said that Kinjo Sensei is a great repository of karate knowledge. Has he spoken often of karate before the integration into Okinawan school systems? What were the major difference pre/post war, in his mind?

PM: O-sensei is always a great repository of karate knowledge (now nearly 92 years old). In fact, in addition to the many books he’s written, he’s currently in the process of writing yet another! To tell you the truth, all O-sensei ever talks about is karate; he’s still very sharp mentally and remarkably fit, especially for a man so advanced in age.

He always talks about karate in general and has spoken much about the old-days, the “old ways” and many of the authorities with whom he’s come into contact with along the way. Also, my wife Yuriko and I have had the opportunity to translate many articles, either by or about O-sensei. All of this has been quite insightful. He learned directly under Hanashiro Chomo, Gusukuma Shimpan, Oshiro Chojo and Tokuda Ambun. As these men were also the senior students of Itosu Ankoh, and the principal instructors to first teach karate in Okinawa’s school system, O-sensei has a lot of interesting stories about the old-ways. As I have also spent a lot of time studying the past, with a special emphasis upon the old-ways, I can tell you that this is one topic we’ve discussed many times over the years.

One of the biggest things that separate the past from the present, according to grandmaster, is method, organization and systematization. In the old days karate training was very personalized and never as stylized or as commercial as it is today. Also, most of the local Okinawan instructors were all friends of each other and frequently enjoyed “cross-training,” and social gatherings. Little emphasis was ever placed on competition whereas today it’s virtually the opposite; competition is everything! The idea of kihon [learning strikes, blocks, kicks, punches, and postures] separately before learning kata was unheard of; this was a new concept developed in the 1920’s and 1930’s. Old-school training, prior to karate being introduced into the school system was all about private/personal training, two-person drills and kata.

MA: One of the trademarks of Koryu Uchinadi is it’s two-person tegumi drills. Can you talk a bit about how you came to establish these drills and why you chose to name them in honor of Okinawan Tegumi? In what ways do you suspect they are similar/dissimilar to the ancient version?

PM: I first came across the term, “Tegumi,” while I was still residing in Japan and working on the Nagamine Shoshin book translation “Tales of Okinawa’s Great Masters” for Tuttle publications. The term is made up of two separate ideograms; Te – meaning hand or hands, and gumi/kumi, which holds several meanings, such as braid, construct, assemble, unite, cooperate and grapple. More interesting was identifying that the term was also kumite written backwards! Learning this I remembered that as a young kungfu student*, my sifu used the term, “crossing hands,” in the same way that swordsmen used the term, “crossing swords,” as a way to describe fighting.

Asking Master Nagamine about it, he told me that the original, and far more brutal practice of Tegumi had fallen quietly dormant during the end of Okinawa’s old Ryukyu Kingdom Period [c.1879]. Following it’s demise, a modified rule-bound version of stand-up clinch wrestling ascended from it called Okinawan Sumo. In spite of several efforts to popularize the more modified version, the new cultural recreation fell short of gaining widespread recognition.

Considering myself more than a novice history buff, and having spent considerable time in Okinawa, I was surprised that I’d never come across the term “Tegumi” anywhere before. One only need look around at the publications of that era to clearly see that the term “Tegumi” was not in use anywhere within the karate community. As I was also occupied with searching out the origins of various two-person strength and conditioning exercises**, used in old-school karate practices, you can probably now imagine why I liked the dormant term straight away. Having traveled to Fujian in search of what southern kungfu styles used these two-person hand practices, I’d learned a wide range of drills and was searching for a user-friendly name under which to deliver them to others. What better name for such two-person hand practices than Tegumi?

MA: You often suggest that kata are mnemonic templates that are “geometrically choreographed” to elicit understanding of techniques that can be used against habitual acts of physical violence (HAPV). Can you break that down a little more and explain what that means?

PM: As karate is a defensive tradition, what could be more important than learning to identify which acts of physical violence it was developed to defend against? Wouldn’t the ability to defend oneself be left entirely to chance otherwise? Only a naïve mindset imagines that all “fighting” is about standing toe-to-toe with an opponent! Even then, this approach concludes one has the luxury of facing their attacker! The KU approach varies drastically.

The original idea that karate is a defensive art presupposes that if an “opponent” was facing you, irrespective of whatever threatening gestures and verbal taunts were being made, unless you were literally set upon, the better (wiser) person also learned to evade the potential threat, hence preventing the need to harm someone. As such, the need to actually defend oneself arose only if and when an attacker actually seized a hold of you.

In civil/domestic circumstances***, “one against one, empty-handed unwarranted acts of physical violence” (HAPV) represents the contextual premise upon which the art of self-defense was originally forged. My research revealed that pioneers developed various engagement scenarios****, so that novice students could safely rehearse prescribed application practices. In KU TPAD [Koryu Uchinadi Two Person Application Drills], aggressive resistance serves as the catalytic mechanism through which learners are able to achieve functional competency. By bringing together various prescribed application practices into solo routines, something greater than the sum total of their individual parts appears; kata! In KU, this is how we see kata as mnemonic; i.e., a practice that culminates the lesson already learned in TPAD. Moreover, as creative mechanisms through which to express individual prowess, kata also serve a popular means of strengthening one’s overall mental, physical and holistic conditioning.

As such we believe that the HAPV premise crosses the boundaries of time, culture, and gender and therefore are as valuable now here in the West as they ever were in the beginning.

MA: One of your primary methods of exploring bunkai is reverse engineering using HAPV. Do you suspect that karateka of generations past spent far less time exploring bunkai because the applications were introduced first, with the kata then coming after to reinforce those already established lessons?

PM: I do, in fact. With few if any of the distractions, as exampled in today’s highly commercial-based traditions, old-school training methods focused much more upon prescribed application practices.

That said, tradition was never meant to be about blindly following in the footsteps of the old masters, or even preserving their ashes for that matter. In principle, tradition has always been about keeping the flame of their spirit alive, and continuing to seek out what they originally sought. This timeless message is how practices are kept functional, and it is why tradition should inspire learners, not inhibit them!

MA: When exploring bunkai do you have personal checks and balances to determine if you’ve let your creativity veer too far away from the core concept of the kata? How do you keep your imagination inline with the kata’s intent?

PM: Aggressive resistance is one “check” that helps keep us within the boundaries of reality. Another is simplicity; methods that require cognitive thought in the midst of unpredictability and all hell breaking loose, tend to be time-consuming and have little place in practical application. Finally, if and when the prescribed practice meets these criteria, its solo representation MUST still resemble the kata mnemonic. There’s a cute little saying we use in KU about ambiguity; “If it has feathers, quacks and flies, it’s a duck!” So too, if the said prescribed template (i.e., a group of self-defense techniques from the kata) meets the criteria, and looks exactly like what’s in the kata, then until someone is able to show me/us something “more functional,” I/we consider this, “the application!”

Incidentally, this does not suggest that the said template cannot be used in another context exactly the same way, only that the premise doesn’t have to be the same!

MA: Do you still practice kata in your personal training? What value do you derive from it these days?

PM: Oh, yes! I love kata…it is the true art of karate and I am very much inspired by its continued study.

* I studied southern-style quanfa in my youth and started out teaching Hung Gar & Pai Lum kungfu in 1973.

*** In contrast with the very different military premise or competitive arena.

**** Attack scenarios, which encapsulated the habitual acts of physical violence in a systematized method.