Welcome to a special interview with Nicklaus Suino. Suino Sensei has been kind enough to share some of his story with us and offer up great insights into the world of iaido, kenjutsu, and budo.

Iaido is the ancient Japanese art of sword drawing and is renowned for its high level of difficulty. Kenjutsu, iaido’s sister art, is the actual use of the sword for cutting and striking. Both are critical components of what is known as Japanese Budo.

Suino Sensei’s experience and skill have allowed him to become one of the most influential sword practitioners in North America. He has created several important books on the subject, including “The Art of Japanese Swordsmanship” and “Budo: Mind and Body“. He also heads up the Japanese Martial Arts Center in Ann Arbor, Michigan – a well respected home for arts such as judo, jujutsu, and Japanese swordsmanship.

Here now is the Q&A where we discover more about Suino Sensei’s trips to Japan, experiences in budo, and ideas on how best to follow the martial way.

MA: Suino Sensei, could you describe your early experiences with martial arts in Ann Arbor? Did you fall in love with the study right away or was it gradual, and what caused you to sample different styles initially?

NS: When I was eight years old, my parents took me to watch a judo demonstration at the Ann Arbor Y. I was enthralled. Over 40 years later, I remember the demonstration as if it happened yesterday. I started attending classes and, after some minor success in shiai, I was hooked.

We had terrific instructors at the Y – they worked hard to teach us quality skills while keeping the practice fun. Nobody talked about the character development aspects of judo in those days, however. We just trained hard, hung out with our friends, and competed whenever possible.

I had one seminal experience in 1969 or 1970. Ito Kazuo Sensei, one of Mifune Kyuzo’s contemporaries, was traveling the world to introduce judo, and came to give a demonstration at the Y. For some reason, Ito-Sensei picked me out of 100 young judoka and showed the crowd that an 80-pound kid could throw “a fat old bastard like me” (his exact words!). He had with him a young Sato Shizuya, who later became Chief Director of Kokusai Budoin, IMAF. Sato-Sensei was my jujutsu and judo instructor at the American Embassy Judo Club in Tokyo between 1988 and 1992. I didn’t remember that Sato-Sensei was Ito-Sensei’s assistant until he and I discussed the tour in 1989. Sato Sensei remembered the tour, but didn’t remember me throwing Ito-Sensei. 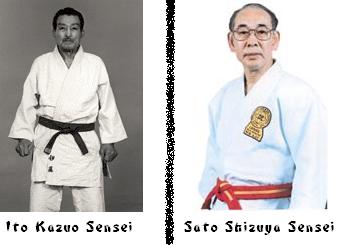 In 1979, influenced by Bruce Lee and Chuck Norris movies, I became interested in the striking arts, and began taking Shorin-Ryu Karate classes at the Asian Martial Arts Studio in Ann Arbor. I later dabbled in Hung Gar Kung Fu and aikido before heading to Tokyo in 1988. In Tokyo I studied Kyudo, Nihon Jujutsu, Judo, and Iaido, and attended seminars in various other Japanese martial arts.

MA: What inspired you to move to Japan? What is it about Japanese culture that ultimately captured your imagination and heart?

NS: Two things inspired me to move to Japan. One was my romantic idea that Japanese people looked and acted like the characters in old samurai films. I loved the idea of living with people who dressed in kimonos and lived by a code of honor. The other motivation was my intense desire to get better at martial arts. I believed that, if even half of the hype were true, there had to be some really extraordinary martial artists in Japan, and I wanted to study with them.

Bushido attracted me for the same reasons it attracts lots of young people. There’s a lot of uncertainty and unfairness in life. Bushido seems to provide a lot of answers, and I liked the idea of a moral code driven by honor. Of course, I was to find out that modern Japan is very unlike the Japan of Kurosawa movies, and that very few Japanese live by the code of Bushido, but those were my thoughts as I set out for Tokyo.

MA: Could you talk a bit about Yamaguchi Katsuo Sensei (your main iai instructor) and what led you to train under him? What was your training regiment like?

NS: My plan upon reaching Japan was to study kyudo. Karl Scott Sensei, my karate teacher up until 1988, suggested that I look into iaido. I didn’t think I’d like iaido as much as kyudo, but I attended a seminar in Las Vegas in 1988 in which iaido was taught by Yamaguchi-Sensei. Other than being impressed with his demeanor (he was extremely centered and radiated energy), I can’t say I fell in love with iaido at that point.

After reaching Tokyo, however, I pursued a meeting with Yamaguchi-Sensei. The first time I asked Sato-Sensei if he would introduce me, he turned me down. But I trained very hard, and when he saw that I was serious he agreed to arrange a meeting.

My first training session with Yamaguchi-Sensei was a remarkable experience. Sensei and his wife welcomed me warmly into their home, and we hit it off right away. We trained for 3 hours the first day, and iaido become the first and only martial art that felt almost completely natural the first time I tried it.

The training was simple. We’d put on our iaido gear, Yamaguchi-Sensei would demonstrate a form, and I would try to repeat it. If I did reasonably well, he’d demonstrate another. If not, he’d make a single correction and I would repeat the move until he was satisfied. After a year or so, he began to talk a bit about power sources, movement theory, the relationship betweenkendo and iaido, and the tactical and strategic aspects of the forms. But 90% of each session was silent, concentrated repetition.

MA: That’s very interesting! His methods seem to have payed off – you placed very well in the All-Kanto tournaments during your stay in Japan. Could you talk about that experience a bit?

NS: Compared to demonstrating solo in front of Yamaguchi-Sensei, gradings and competitions were easy. I was much more concerned about pleasing my teacher than I was with winning, and he emphasized that testing and competing were simply aspects of training – whether I won or lost was of little consequence.

Still, we used a good formula to prepare. We picked a set of forms that I was able to perform without major mistakes. Starting about six weeks before an event, I would practice the set as many as 100 times a day. Sensei would review every detail of every form and make careful corrections. By the time of the event, I could perform the sets in my sleep (in fact I often dreamed them). The proof of this method is that I was double promoted in my first shodan shinsa (from mudansha to nidan), and won the All-Kanto Tournament every time I entered.