I’m very happy to present this interview with Jody Paul Hanshi. Counted among some of the earliest westerners to experience karate on the island of Okinawa, Paul Sensei has a rare combination of influences. He is a senior practitioner of Seidokan and Motobu Udundi, as well as having extensive experience in Okinawa Kenpo Karate/Kobudo and Shorinji Kempo.

Paul Sensei has distinguished himself through years of military service and deligent training.

Paul Sensei has continued to pass on the lessons taught to him by his instructors, and brings a special energy to each of his classes.

I recently had a chance to sit down with him and ask a few questions about his training and theories surrounding the martial arts.

MA: Paul Sensei, thanks for agreeing to share some of your story with us. To start off with – what inspired you to get involved with the martial arts in the first place?

JP: I was listening to a couple of guys talking about it. Actually it was judo. Later I watched them throwing each other around and I thought that was kinda neat. I got into karate because of watching the judo guys.

MA: How old were you when you made the leap into karate?

MA: When did you enlist in the military?

JP: It was about 1960. Around 1962 we had the cuban missile crisis. I was involved there, and it was one thing or another for the next several years. Soon after I retired it got a little better, haha.

MA: When you were stationed in Japan, because of your experience in karate, did you immediately try to get involved with martial arts?

MA: Who did you end up connecting with?

JP: I trained with Watanabe Sensei, who was one of master Doshin So‘s students. Then from there, I continued with So Sensei in Shorinji Kempo.

MA: Was the training regimented?

JP: In Japan it’s a lot more regimented than Okinawa. everything is very stand in line, and so forth.

MA: How did they take to you as a westerner? Was there any friction?

JP: A little bit of…skepticism. of course. but overall fair treatment. I think in some instances I got more preferential treatment because they wanted to make sure I got it right, haha.

MA: What ultimately led you to transfer to Okinawa?

JP: Okinawa was the departing point to Vietnam in the early days. We staged a lot of people out of Okinawa. I didn’t have a choice in that matter. My teacher (Doshin So) had trained years and years before with some people on Okinawa, and I had a letter of recommendation from him to show to Okinawan sensei.

MA: Did you spend any time in Vietnam itself?

JP: Yes, I spent a bit more than three tours there. I got to come back to Okinawa between and after.

MA: When you had your letter of recommmendation, which Sensei did you choose to go to?

MA: Was there something in particular that stood out about Toma Sensei?

JP: Ohh yes, he was very strong. His techniques were similar to what I learned in Japan and I felt comfortable doing his style. In kumite, weapons, and everything he does you could sense the power.

MA: Could you describe a bit about the Okinawan training culture?

JP: In the dojo it wasn’t quite as regimented as it was in Japan. It was loose, people were warming up and training on different areas of the floor. There wasn’t as much ‘yes sir no sir’. There was respect of course. Another thing I noticed was the kids that would run through the dojo. You might be working out and doing kata and a little one would run under your feet. It was more of a family environment. It was like one big family. Everyone would take care of each other.

MA: Did you find that there was a lot of opportunities for cross training, or perhaps teachers visiting each other?

JP: Yes, a lot of times. For Toma Sensei, he had one kata for each weapon. if you wanted anything more advanced, he would send us over to Odo Seikichi Sensei. he would say “you need to do more weapons, you go see Odo.” Odo Sensei was happy with that too. They were both of the same mindset.

MA: Speaking of Odo Sensei, could you describe your time with him? You were one of the earliest westerners to train with him.

JP: He was an integral part of my kobudo and karate training. I did a lot of the tuide for his forms and his weapons forms. It was quite similar to what Toma Sensei did. Back then a lot of it was similar to each other, there were only different nuances depending on how the person was built and how they liked to act. There were a lot of common threads. Odo sensei could show you 20 minutes of connections to a 2 minute question. And that was great because I was always asking why, how, how comes…, he was always happy to share. Odo also had a very good way of showing you new forms, he explained it to you very well. 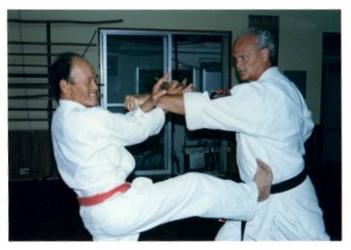 MA: Could you talk a bit about what day-to-day training was like? Was there a certain amount of time you trained, and was it the same time every day?

JP: The training wasn’t a strict regiment of a certain number of kicks, punches etc. We would go to the dojo or beach and do some basics. We would train some punches and kicks and throws in the ocean with water up to our neck. Then get out on the beach and do some running (Uehara Sensei was always good for this kind of training). It was very very hot there, so you couldn’t train for as long. We would work out for an hour and then have a beer break. It was tough for me to go back to training after one of those.

In the dojo at night, you could bring a gallon milk jug of water and a six pack of beer. You would drink the water during the class and then the beer after. We would hear a lot of interesting stories and ideas then.

MA: Uehara sensei is an interesting story because he comes from the Motobu Udundi line, which has a unique history and flavor to it. could you talk about how you met him and came to train with him?

JP: Uehara sensei is one of the people I was introduced to by So Sensei. when I got to Okinawa and started training with Toma Sensei I saw that Toma was friends with Uehara (With the rengokai coming together, Toma Sensei got a chance to learn more of the toide from Uehara Sensei). Everything fell into place then, I went to visit with Toma and began training after that. Uehara Sensei was a very interesting person. He was very close with his students, which I enjoyed a lot because he took a lot of time with his students individually.

MA: Toma sensei had a lot of power and impact with his method, while Uehara Sensei’s style features a lot of flow and dynamics. Was it difficult trying to learn Uehara Sensei’s methods at first?

JP: Ohh yes, every time I would punch and kick Uehara would say “ohh…you do like shorinji ryu” (back from my Japan days). He spotted me right away. It took several years for me to get used to the ideas of hard and soft. The older I got the softer I got I guess, haha.

MA: What was Uehara Sensei like as an instructor? Did he demonstrate a lot and was there a lot of conversation?

JP: Doing the toide techniques, he would demonstrate a lot. Then everyone would break up and try to do it. Uehara Sensei would then come around to each person and correct things and fix us. He didn’t teach everyone the same way. I asked him this question one time – “why does so-and-so do it this way, a little bit different than me”, and the answer was that my body was different than the body he had. If you were powerful like Toma Sensei, he would have you punching real strong, but the long tall skinny guys couldn’t do it the same way so he adjusted what would work for them.

MA: When you came back to the US, were you given instructions to begin a school or organization?

JP: Toma Sensei had requested that I start a school and association. I came back in 1970, but in 1984 we brought Toma Sensei to Pennsylvania. at that time we started our first association. We had a big seminar and formed the first USA Seidokan association where Toma Sensei appointed the different officers.

MA: Did you spend a lot of time at tournaments in the earlier days?

JP: Not that much. I went to a few of the original tournaments. To me it didn’t show what the arts were all about anyway. Also I wasn’t used to pulling punches and kicks which was a problem. Master Odo and Master Toma tended to fight with bogu gear and hard contact. so if you got in the “ring” you hit the other person. Here if you did that they would throw you out. That’s what happened to me at least. I never denied my students the experience though. If they wanted to give it a try I would support them and go with them.

MA: With your experience across Okinawa Kenpo, Seidokan, and Motobu Udundi, how important do you feel natural movement is to success at higher levels?

JP: Kihon, basics, and everything is set in iron because you have to learn the core of the movements. Without that you can’t get into doing natural stancework and techniques later on. So it’s important, but not without the earlier stuff.

MA: Modern karate tends to be a mix of business and training, the balance of which can be difficult. What do you see as necessary for keeping the Okinawan spirit of karate alive?

JP: Toma Sensei always wanted us to open schools, and if you do that you have to have some business with it too. Here in the states that’s just the way it is. Uehara Sensei didn’t believe as much in having a formal school where you charge money for classes and so forth, so he never did that. I think if we stay true to the art and the way that we learned, the original way that we learned from our teachers and carry on what they were trying to give us, martial arts can still go a long way.

MA: Thank you very much for your time and insight Paul Sensei!