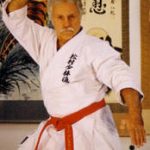 I recently had the opportunity to chat with George Alexander Sensei.  I’ve trained with Alexander Sensei just a few times in the past, but his enthusiasm for the martial arts is something that has always stuck with me.  He is a true investigator and teacher, and thanks to his efforts, much has been revealed and preserved regarding classical martial arts that might have been lost otherwise. 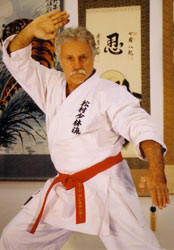 Alexander Sensei is responsible for some of the most important books in publication regarding Okinawa, including Okinawa: Island of Karate, and Bubishi: Martial Art Spirit.  These books are often found in ‘must read’ lists for karate practitioners.

Along with his written work, Alexander Sensei has spearheaded Yamazato Videos.  Realizing that learning martial arts is done mostly through watching, Alexander Sensei was one of the earliest instructors to embrace this new technology and provide both enlightening and rare knowledge in his video tapes.  Since its inception, Yamazato has grown to cover a myriad of styles and concepts, competing with ‘big boys’ like Panther Productions and Asian World of Martial Arts.

Alexander Sensei is a whirlwind of martial arts accomplishment, and I was fortunate enough to steal some of his time in order to ask questions both about his background, and his take on some commonly debated martial arts concepts.  Enjoy!

MA:  Alexander Sensei, thank you for sitting down with me!  I’d like to start off at the beginning – how did you get your start in the martial arts and what was the whole “scene” like at that time?

GA: Well I started when I was a kid.  My dad had been in the army airforce and was teaching something they called combat judo.  And at that time (late 50s, early 60s or so) there was no karate around.  I was intrigued by judo initially, and ultimately, I joined the military myself [united states marine corp 1964].

Shortly into my military career, I started studying Shorin Ryu at Camp Lejeune in North Carolina.  I did that until 1967 when I was transferred to Okinawa.

MA:  Is that when you started studying with Yuichi Kuda, who you cite as your primary Sensei in Shorin Ryu?

GA: Actually No.  I didn’t study with Kuda Sensei until later.  I spent a good many years studying with different Sensei on the island.  Two you may have heard of are Eizo Shimabukuro and Fusei Kise.

MA: It must have been neat on the island where so many outstanding instructors were accessible.  When did you ultimately decide to “settle in” with Kuda Sensei?

GA: I spent a good 20 years in training before that.  I think up until 1984…or 85.  So before that I was learning a lot about Shorin Ryu, Shotokan, Goju Ryu, and Kyokushinkai.

MA: I was hoping you could give me a flavor of what training was like at that point.  Do you find that the older training style is reflected in the modern U.S., or were things a bit different?

GA:  I think the 70’s were kind of a “macho” era.  There were no kids in karate…or very few.  It was a lot of young men with a lot of testosterone, so it was kind of a knock-em-around environment.  Then the 80s were more like the decade of Karate Kid with Mr. Miyagi and wax-on-wax-off.  Much more contemplative.  Then the 90s were more about sport karate, and we saw the emergence of a lot of federations.  Now it seems we have come full circle, in a sense, where we have MMA.  These are individuals who are interested in combining all kinds of styles together, which I think is a bit more like what the original instructors had intended.  Of course,  MMA is still very heavy sport oriented, as was the influence of the 90s.

GA: I don’t know if I would qualify it as healthy or not.  It’s the way of the world.  You can’t stop change.  The world, and the things in it, are dynamic and they’re bound to change.  So I always like to use the old Matsumura saying: “change with the times.”  Sokon Matsumura, a fountainhead of Okinawa Karate wisdom, said that to one of his students when he was in his 80s.  He wrote him a letter containing that message.

Of course, that doesn’t mean give up whatever martial art you’re doing and do MMA.  And actually, too much of going with trends has resulted in some of the factionalizing that we see today.  Every decade seems to have a trend (like ninja in the 80s), and clearly MMA is this decades hot trend.  It’s important to decide whether you want to pursue a martial art or martial sport.

MA: The previous head of Okinawa Kenpo, Seikichi Odo, was known to be a collector when it came to Kobudo.  Did you receive all of your Kobudo training with Kuda Sensei, or did you have to do some collecting of your own?

GA:  It’s true, a lot of the early Kobudo practitioners were collectors.  Kenwa Mabuni, he was certainly a collector.  Shinken Taira – he went around the island collecting and codifying 40 or so different weapons kata into a system.  Certainly Odo Sensei as well.

It was no different for me.  I learned some here and some there, but then established myself in Kuda Sensei’s kobudo program.  And really, I think you learn that way because no one person has it all.  You have to interact with different sensei to get different knowledge.  This is also one area where I learned from master Kise.

MA: Switching gears just a bit, could you explain what Shorinji Ryu Jujitsu is?

GA: Ohh sure.  Shorinji Ryu Jujitsu traces its roots to Japan, but I trained under Hanshi Ken Penland.  The style, more or less, came from Albert C. Church.  There are 20 two-man kata, which are training drills in jujitsu technique.  But ultimately, it shares the same principles as most jujitsu styles (a wrist lock is a wrist lock, an armbar is an armbar).

MA: So you trained with Penland Sensei in Jujitsu, but you also were both students of Yuichi Kuda?

GA: That’s right.  We tapped into each others experience very often.

MA: One of the things you are best known for is your experience in Hakatsuru White Crane Kenpo.  Could you discuss a little bit about what this is, and why you’ve dug so hard to uncover and preserve the principles of hakatsuru?