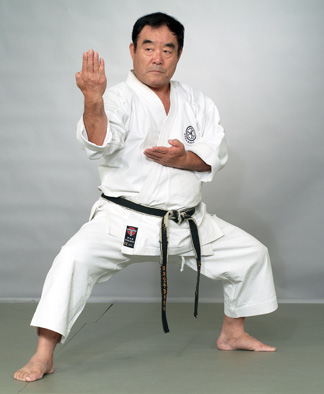 I’m pleased to present this interview with a very influential martial artist: Fumio Demura. Demura Sensei is known wordwide for his tireless efforts in spreading Shito Ryu Karate and Taira based Kobudo.

Demura Sensei’s impact has spanned multiple countries and genres. While establishing a strong martial federation in the Shito-ryu Karate-do Genbu-kai, he has also acted as an advisor, choreographer, and stunt double in many movies and TV shows.

Through decades of deligent study, Demura Sensei has amassed a truly exceptional resume’ of experiences (too many to list, they can be viewed here). Some of his most noteworthy television/movie projects include The Karate Kid (I,II,III), Rising Sun, Mortal Kombat, Walker Texas Ranger, Warrior Within, and more.

Demura Sensei keeps a very busy schedule even to this day, but he was kind enough to answer a few questions regarding his background and projects. I will also fill in a few details regarding Demura Sensei’s life as the Q&A progresses.

MA: Demura Sensei, Is it true that your first experience with martial arts was at 9 years old, studying the art of Kendo? If so, what inspired you to get involved so early?

FD: I started Kendo in 1948. At that time we finish the war and all house was broken. I don’t have shoes so I walk by bare foot, and no food and no toy to play so we cut trees and made bokken to play Kendo. A little later someone open a karate dojo but I was too young to join so Kendo was ok. I sign up to do Kendo and later my sensei say ok, you do karate.

In the 1940s and 1950s Kendo and Jujitsu were more important arts in Japan than karate. I inquired as to what attracted Demura Sensei to the Okinawan born art:

MA: What was it about karate that caught your attention and inspired you to continue studying it?

FD: At that time Karate-do was mystery! I hear about but never yet seeing it, so I wanted to learn. In the dojo and life I was hard working day and night, so in time I got to see and do.

Demura Sensei trained under many martial luminaries, but in his kobudo adventures none were more impactful than Taira Shinken. Shinken has been known as one of the most influential kobudo artists of his generation, alongside individuals such as Matayoshi. I asked about Demura Sensei’s time with Taira Sensei:

MA: When was your first introduction to kobudo? What made you choose to add that to your growing experiences in the martial arts?

FD: It started while at Sakagami Sensei’s Itosu-Kai dojo. Mr.Taira was moving and leaving one or two years so I training every day with him in Bo, Sai, Kama, Nunchaku, Tonfa.

MA: Do you have any special memories of training with Shinken Taira Sensei? What was he like as an instructor?

FD: Mr. Taira always walked little funny (he broken leg long time ago) and he treat me every day a little different…but I found out he trained “old way” (no question, just do it). During training I adjusted myself, so he get mad at me when I do wrong. But he was very tender man and would forget what happened minutes later.

Demura Sensei combined that experience with more training from other skilled exponents, such as Motokatsu Inoue, Hyogo Kuniba, Teruo Hayashi.

In 1963 Demura Sensei was brought to the United States by his colleague Donn Draeger, and once there met an individual named Dan Ivan. Ivan Sensei was on the lookout for talented instructors to work with in his Southern California Dojo (pl), and Demura certainly fit the bill.

A few years later Demura Sensei agreed to participate in an international tournament, and that’s where his love for movies and publication began.

MA: What inspired you to get involved with the Hong Kong Film industry and Hollywood in the mid-1970s? Was there something particularly attractive about making movies?

FD: It began when I did demo. At the International tournament Bruce Lee was watching and after he asked me how to use weapons. So I spent time and showed him. He used weapon for his films and I saw how he did it. After that I made Warrior Within and many other film and TV show for demo. One special was for NINJA from Nu Image Production. They use a lot of weapons and I coordinated the film.

MA: What was it like teaching Bruce Lee weapons?

FD: Bruce Lee is same like you and me, human. But he have strong ideas and he study lot. He was passionate guy so was easy to teach him.

In time Demura Sensei wrote a series of books which have since become staples of the kobudo world. In his series, each weapon receives it’s own separate treatment, and in each he lays out history, basic techniques, and pictorial guidelines.

Out of curiosity, I inquired about which particular weapons were Demura Sensei’s favorite. he answered simply that he considered bo and sai his main weapons.

Returning to the matter of teaching, especially in the modern era, I inquired about some of Demura Sensei’s ideas for students and his federation:

MA: How soon do you begin teaching new students about things like honesty, honor, and good manners? Do you feel it is as important as the physical aspects?

FD: When start day one I make clean up dojo floor or flowers and I explain why you need bow and answer “Yes or Hai”. I also tell why to move quickly, etc…. that is budo and traditional way…not too much technique.

MA: Could you discuss the current state of the Genbu-Kai, and how you would like to see it grow moving forward?

FD: Genbu-kai meaning is Gen(Original or professional) BU( Martial Arts) Kai (group). My point is that we teach budo. Budo is not to fight, but to make perfect person. Other meaning is that can you can become full person in society. That is Genbu-kai karate-do.

This answer can be likened to one of Demura Sensei’s prior quotes: “In Genbu-Kai Karate our goal is for every one of our students to have a strong character and to have the successful life of a good person – this is the core of our way, our Samurai spirit.”

I’d like to thank Demura Sensei for taking time out to answer these questions and give us some insight into how his career has developed. Be certain to keep an eye out for more projects from Demura Sensei as he is always on the move!