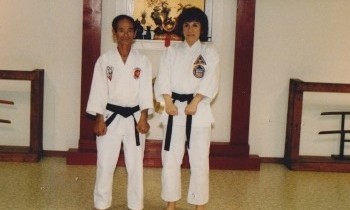 I’m very pleased to present this interview with Ann Marie Heilman, senior practitioner of Okinawa Kenpo Karate and Kobudo. Heilman Sensei has spent over 45 years training and leading the way for women in the martial arts.

In addition to being a skilled martial artist, Heilman Sensei is a formally educated psychology and special needs professional. She has been an important figure in teaching martial arts to at-risk children, abused women, and other individuals in volatile circumstances. She plays an integral leadership role in the International Karate Kobudo Federation and the long operating Heilman Karate Academy.

It was my pleasure to converse with Heilman Sensei about her past training experiences, views on women in the martial arts, and her responsibilities as a senior practitioner. Please enjoy the interview!

MA: Thank you again Heilman Sensei for agreeing to do an interview here. Let’s start at the beginning – when was the first time you set foot in a dojo or training environment? 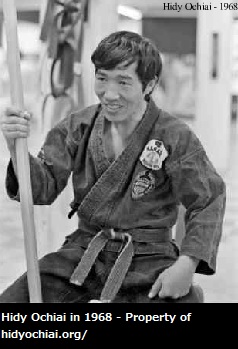 AMH: I was a freshman at Albright College and Hidy Ochiai was a senior at the time. He was offering Judo Self Defense classes at the local Y. I was really interested in that, and had some personal safety concerns because one of my family members was being released from the state hospital (mental and behavioral problems). I signed up for it, hopped on a bus, and went down to the Y once a week for self defense training. This began in 1966.

The content of the course focused on street awareness and defense techniques (where to hit, how to hit, how to throw, etc). The basis of the class was on Judo methods, which I found challenging as a smaller woman.

It was a very good experience because Ochiai Sensei had endless patience with us. He always encouraged me to continue, even when the program was coming to an end. I was never sure if his encouragement came because he saw a spark of passion in me for the martial arts or if he thought I was so bad I needed lots more extra help, hahaha.

MA: Where did your training go from there?

AMH: As I mentioned Ochiai Sensei was a senior, so after his time was up at the university I had to seek training elsewhere. One day when I was in my dorm room a friend of mine named Rick Ulrich walked in and invited to take me to a local dojo operated by George Dillman.

I had no real knowledge of what karate was, but Rick and a few other friends were involved. I remember my first class there I had to go through something called a kata named “taikyoku one”. I remember thinking – this is kindof…odd. And I had a lot of problems with it. Coming from an inner city school I had almost no experience with gym classes or sports. To do something in a coordinated and physically organized fashion like that was hard.

MA: Were you tempted to quit at first due to the difficulty and unusual nature of the exercise?

AMH: I don’t think I knew at the time how hard it was for me and how bad I must have been. I didn’t know that I was struggling.

MA: Could you talk a bit about the curriculum at the Dillman School?

AMH: At the very beginning I didn’t realize that what we were doing was different from what other people were doing. However, over time I realized that our style of practice was connected to Isshin Ryu Karatedo. In time the name changed to Okinawa Kempo due to influence from Daniel K. Pai, however the content of the class didn’t change. Our training consisted of Isshin Ryu forms and sparring as well as some self defense.

Things were very tournament oriented at that time. I remember going to a national tournament in Indianapolis in 1969, which coincidentally is the first time I met one of the major figures in United States martial arts – Robert Trias.

MA: What was the climate of martial arts training like at that time?

AMH: Truthfully it was a very macho kind of environment. Practitioners were mostly men and the martial arts were still heavily connected to the military (considering the individuals who were bringing karate back from the East). There were so few women that we were a sort of novelty.

All the women I knew in training at that time were white belts. It wasn’t until I attended a tournament that I actually met a black belt woman named Bobbi Snyder. She was competing in the same ring as us because there was only one ring for women (white through black belt and regardless of age). Bobbi took first place in our kata division, and my roommate Linda took second.

Linda and I were convinced this woman (Bobbi) was going to be standoffish and /or aggressive, but when we all met in the locker room after the competition she immediately joined us in conversation saying how glad she was to meet us. She really encouraged and supported us in our training and said how she was looking forward to watching us gain rank and skill.

She was a student of Glen Premru at the time, a very well known karateka in his own right located in Pittsburgh.

MA: You met your eventual husband, C. Bruce Heilman, at the Dillman School. Could you talk about that meeting?

AMH: I had been training at that dojo for about a year before Bruce came to town. He was from the Pittsburgh area but was serving an internship near Reading. He was already a Shodan under Hank Talbot when he arrived, which was in a style of Jujitsu developed by Dewey Deavers that featured a healthy mixture of tripping, throwing, and striking methods. The Deavers system was known as a hard knocks style that integrated ideas from other methods, including karate. As such, when Bruce arrived in the Dillman school he was honored as a black belt. Of course, he had to learn the kata before being recertified in our style.

When we first started we were side-by-side students. Of course, he had an unusual natural gift for these sort of things and it didn’t take him long to become one of the instructors there. He was a savant for kata and a very good fighter.

We were married in June of 1971, only about 9 months after meeting. 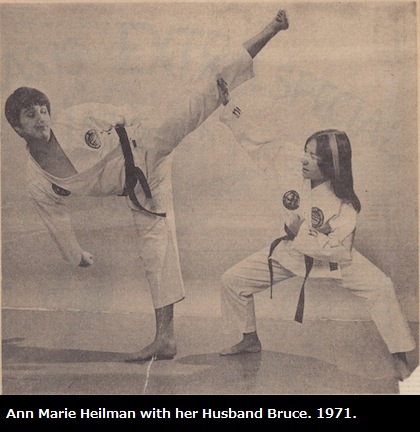 MA: Could you discuss how you eventually began to train under Robert Trias Sensei?

AMH: We reached out to Mr. Trias who we had known from tournaments for a number of years and expressed our interest in learning from him. He directed us to connect with his regional director, who as it turns out, was Hidy Ochiai. Since Bruce was a Nidan at that time Ochiai Sensei decided to test him, and subsequently made Bruce fight all the black belts in his dojo for hours. Bruce was loving it, and afterward we all went out for dinner and had a great time. Ochiai Sensei was instrumental in helping us with our East Coast training and keeping us connected to Trias Sensei.

Bruce and I established our own school in 1972 in the Reading area. For a few years we were focused on building the school and teaching while still learning from the USKA (Trias Sensei’s organization) members in the area. It was in the late 70s and early 80s that we actually studied with Trias Sensei directly.

It was also at this time that we participated in many seminars and got to meet some of the great American practitioners of the time.

MA: Could you talk about what training was like with Trias Sensei? How was it different/similar to what you did before?

AMH: It was really excellent, he was as good as his reputation suggested. Trias Sensei provided us with fantastic training and helped us understand what made karate work (or not work). He had keen insight into functionality, fighting, and kata interpretation. He was one of the best of his time. 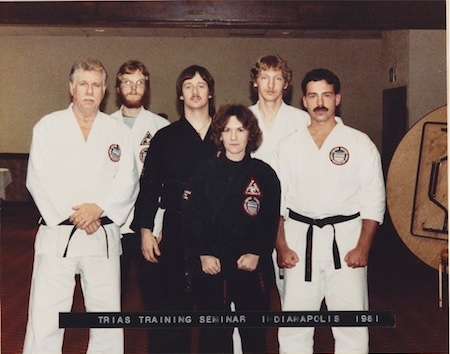 One thing he pointed out to us fairly early was that we were not doing Okinawa Kenpo, even though that is what we were self-labeled through the Dillman School. He suggested that we travel with him to Okinawa in order to meet the headmaster of the style , Odo Seikichi. Of course we were a bit taken aback by this revelation, but Trias Sensei’s honesty and knowledge were part of his value as a teacher. He was rather strict in this regard; he told us that if we wanted to keep calling ourselves Okinawa Kenpo that it was our duty to meet the head of the style and learn his ways.

It took a few years for us to gather the funds and make arrangements, but in 1983 we eventually went with Trias to Okinawa, which turned out to be a huge turning point in our martial arts careers.

MA: You mentioned earlier that you, as a woman, were something of a novelty in the dojo. Could you discuss if that feeling persisted through the 70s and early 80s in the Trias Organization and martial arts world in general?

AMH: Trias Sensei himself was always very giving and open and honest. He would tell you what he thought you needed to do, but not in a hurtful way. Training within that organization was something that I found to be fairly inviting with a productive mindset during training.

MA: What were some of the problems you noticed in general (perhaps not specifically things that happened to you) for women of that era?

AMH: I think one of the biggest hurdles was the mindset of martial arts being “A good ‘ol boys club”. It was a time when women in general were struggling to gain a foothold in the business world. It was very difficult in the martial arts to get respect…you had to prove yourself. The men didn’t want to judge us, and only men judged.

One of the true stories of Bobbi Snyder was that she was very rankled by this idea of women being unable to judge. One day she walked up to a corner judge, tapped him on the shoulder, and informed him that he had an emergency phone call on the line that he needed to attend to. When he left, she promptly took the vacant judging spot. Naturally there was no phone call to be found.

She ended up judging and refused to give the flags back. 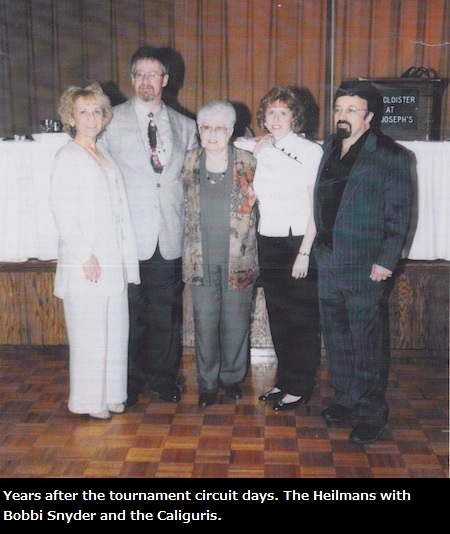 Another issue was actually finding space to compete. We only ever had one ring, and often it was pushed to the side away from the regular competition near the bleachers or even under the bleachers. By the time I was nearing black belt we really had to take a firm stand to be respected. I was innately a shy person so this was difficult for me.

It should be said that there were some really good men at this time as well, supportive and fair. I remember Ochiai Sensei was an instructor with a mindset of equality from the first time I met him, and even when I visited his dojo in later years he always had female students.

Another very important matter is that gay men and women of the time had very little protection in society, so they needed to learn how to protect themselves badly. Therefore, since there was a contingent of lesbian women in the martial arts, a stereotype developed amongst men that all women martial artists were lesbian. This developed into hurtful and derogative behavior toward women of both orientations, straight and gay alike.