News update from the world of Ikigai – I am one of the authors in the newest issue of Jissen Magazine.

For those who are unfamiliar, Jissen is an online publication created and run by Iain Abernethy. Iain is a strong voice for traditional martial arts in the online community and I was very pleased to be able to contribute to his magazine.

My article for this issue is entitled “Okinawan Karate: An Eclectic Arsenal”. It is an exploration of the roots of traditional karate and an analysis of the way the original masters thought and trained.

Despite the serious divide between eclectic arts (like Jeet Kune Do, MMA, etc) and traditional arts, there are actually more connections than one might think. For example, did you know that old-style karate actively encouraged fighting and training from all three ranges, long, mid, and close? Furthermore, there were distinct methods of grappling known as Tegumi which were an integral part of the karate curriculum.

Another fact that often shocks modern practitioners is level to which instructors would share students, and encourage them to seek out knowledge from different sources. This hardly sounds like the strict, only-learn-from-me-I-have-the-secrets method we see today does it? 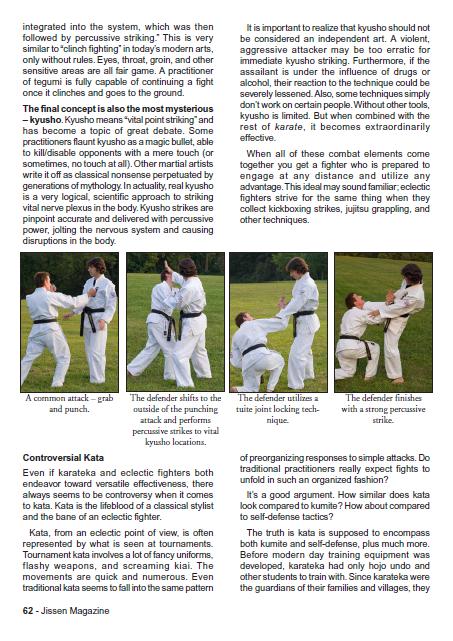 They may be buried underneath the sands of time, but the realities of classical training are still there for us to unearth. If you’re interested in finding out more about the development of karate and how history seems to be repeating itself – download the latest issue of Jissen for free – http://www.jissenmag.com/backIssues.asp