I Understand (But Not Really)

Sometimes the Japanese language seems endlessly complex to me, especially the writing of it. One word can mean 5 different things depending on your inflection and emphasis, not to mention what kind of kanji (or katakana) you use to write it.

A perfect example is the term “karate”. Back in the really old days…well karate was called “ti”. But AFTER that it was called karate, and that meant “China Hand”. Later a fella named Gichin Funakoshi came along and went about changing it to “Empty Hand”. He did this for philosophical and political reasons that you can investigate when the mood strikes you.

When placed side by side the two karates look like this – 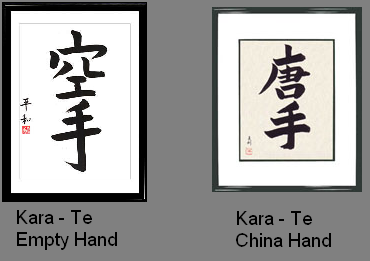 Despite the difference they are spoken essentially the same.

This brings me to an interesting concept that I encountered on the blog of Charles Goodin Sensei (An extremely reputable martial arts historian and writer). In it he asked his karate friend and senior Pat Nakata about saying “I understand” in Japanese.

Goodin Sensei was under the impression that there was one way to convey the concept of understanding, and that was with “wakarimasu”. Nakata Sensei informed him (and us) that there are actually two main methods instead of one.

The term “shirimasu” indicates a level of understanding that is shallow, or surface level. For example, if someone explains a series of directions to you and asks you if you understand, you might say “shirimasu”, because you do understand what they have said, but have done nothing in particular to internalize that information.

Goodin Sensei’s “wakarimasu” also conveys understanding, but on a deeper level. If someone gave you directions and you spent years following those directions, exploring every facet of them, you might be able to say “wakarimasu”.

What a strong concept this is! There is no natural terminology in the English language that can express these ideas as succinctly. And therein lies the strength of the Japanese language along with all of its mind tangling complexities – it can convey critical subtleties of feeling and intent with a single word or short phrase. That’s also why grasping a small amount of the Japanese or Okinawan (Hogen) language is so critical to improving your study of karate (this is true of any culture and language your art happens to come from).

In a Karate Context

In my style of Okinawa Kenpo Karate there are 20 open hand kata and 29 kobudo kata, making for 49 total forms (Seikichi Odo Sensei was a bit of a collector, to say the least). Of those kata I “know” about 42. As many of you have noticed through this blog and facebook, I am not an extremely old man. What this means is that I understand most of those kata in a “shirimasu” sense. There are very few kata in which I would use “wakarimasu”…in fact, there may only be a scant few moments in those few kata that I would consider using “wakarimasu”.

These two different terms make a world of impact when describing progress in your art, both to yourself and others. When analyzing your technique, kata, sparring, and self defense, how is your understanding? Shirimasu? Wakarimasu?

Goodin Sensei contends that most of our understanding is indeed shirimasu, and I couldn’t agree more. In fact, it’s one of those martial art subtleties wherein the more we believe we only have a shirimasu understanding, the quicker we progress to wakarimasu (even though, of course, that goal is always just a little further away).

As the old saying goes: a good karateka, when asked if he/she has attained mastery, always replies: “perhaps with one more year of training.”