How I Got My Ass Beat

When I was around 16-17 years old I received my Shodan in Okinawa Kenpo. It was a great experience and had me riding pretty high. Around the same time, I was actively participating in tournaments. Unfortunately, my youth and ‘confidence’ stopped me from thinking twice about the inevitable shift I would have to make from brown belt divisions to black belt. It doesn’t matter, I figured, I’ll just do my thing.

The transition for kata, weapons, and even self defense demonstrations went fairly smoothly. In each of those, it was a matter of personal skill and showmanship. I lost some, I won some…no big deal. Unfortunately, the transition for kumite (sparring) wasn’t quite as gentle. 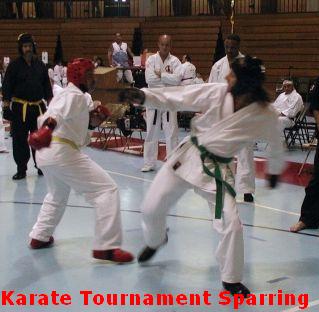 For tournament sparring at that time, the general rules for green/brown belt divisions stated that there was light contact allowed to the body and no head contact. Punches could be thrown toward the head, but actual contact would result in a warning/penalty point deduction. Needless to say I had grown pretty accustom to those rules.

The black belt divisions, on the other hand, tolerated moderate body contact and light head contact. A subtle but important shift. Furthermore, the rules were only vaguely enforced in the black belt division with a lot of flexibility on what was considered ‘light’ (as I would find out later).

As a fresh shodan, I arrived at one particular tournament raring to go. It was very exciting walking around in my black belt, feeling a whole different perspective as I was privy to judging and other privileges . Everything was going smoothly until my division was called up for sparring: adult black belt men (no weight or age differentiation).

I lined up next to a very serious looking individual. As I gazed up at his face, he cast a downward glare on me like so:

Feeling his intensity and aggression, I joked around: “hey, if I get paired up against you, don’t kill me ok? hahaha.”

He didn’t response – only glared.

I allowed my awkward laugh to trail off as the judges collected name slips and announced the match.

“Apsokardu (me) against Death Giant (I can’t remember his name)”

I swallowed hard and lined up across from him. We bowed, got into a ready stance, and waited. As soon as the center judge shouted “Hajime!” my opponent leapt forward and punched me full force in the throat.

Gasping, I staggered back as the judge stopped the round. The throat is not a legal point target, so no points were awarded. I shuffled back up to my line and acquired my fighting stance. At this point, my fragile confidence was beginning to crumble and I felt like one of the little kids fighting Kramer in Seinfeld: 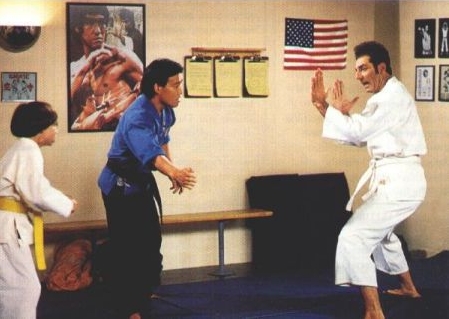 The next round began and we threw a few techniques back and forth. Just as I was beginning to feel comfortable again my opponent launched in and struck me in the throat once again. The judge stopped the round and one of the side judges came over and massaged my neck to promote breathing and make sure my esophagus had not buckled.

We began again and I desparately threw out weak, high kicks to the head. One managed to graze his headgear and I received a point for it.

Since he was now losing 0-1, my opponent became visibly irritated. When the next round began he threw a punch so hard that it busted through my defenses and crashed straight into my nose. The blood slowly began to trickle.

After that I don’t remember too much, but I do know that the match quickly finished 3-1, him. The next two points must have come very easily.

After the match I hobbled away into the bathroom to find tissue for my nose. While washing myself off I quickly noticed that I could only take half breaths. No matter what I did I could not deeply inhale – this was my first and only real experience with hyperventilation.

While in the bathroom a spectator walked in and while washing his hands casually looked over at me and said “tough fight out there – you got pretty lucky with that high kick.” Trying to stabilize my voice and keep it from quivering I said “yea…that was lucky…”

While I wouldn’t wish this kind of experience on anyone, it did help me learn some very valuable lessons.

First – There are underhanded strategies for winning a tournament match. My opponent realized that if he incapacitated me by punching me right away in the throat, he would have a much easier time beating me. Furthermore, he must have known through his experience as a black belt combatant that the judges would not penalize him too quickly. Other strategies like this include punching someone after a round is over or leaning into a punch to draw a penalty point on your opponent.

Second – Tournament or no, martial arts are serious. In my youth I assumed that everyone ‘played’ martial arts the same way I did. I was wrong. This individual, although perhaps TOO aggressive, took his art seriously. It would have been wise for me to be just as serious.

Third – You have to learn to flip the switch. on and off. One thing that neither me nor my opponent knew how to do was turn our intensity on and off when appropriate. Focused on raw winning as his only goal, my opponent was willing to beat me and beat me until the match was over. On the other hand, my confidence quickly turned to fear when I was injured for real. This incident helped me turn a corner and develop a deadly seriousness to be used and controlled with extraordinary care.

Fourth – Even bad lessons can be good lessons. Whenever I find myself ‘playing’ a kata or karate in general, I have this experience to reflect upon. I ask myself – what happens the next time I come up against a big, mean, angry a-hole? What if it isn’t a tournament? It would be very easy for me to hold a grudge against the competitor I faced that day, but instead I want to use that energy to push me forward and make me better.