The bo is one of the most used (and abused) weapons in Okinawan kobudo.  It’s an immensely useful weapon with practicality both in the realm of martial arts training and real world self defense. But, when you come right down to it, the bo is just a stick. What’s to talk about? 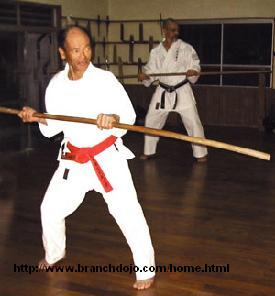 A bo should be straight (relatively), hard, long…that’s pretty much all there is to say about this ancient device. But behind that essence of simplicity lays a whole culture built around the tiniest minutiae that makes this “stick” a deadly weapon. Today I’d like to talk about just one of the pieces of that puzzle: methods of holding.

What’s In a Name

First a quick note: the term “bo” is short for rokushaku bo (in most instances). Roku means six, and shaku is a unit of measurement somewhere around a foot. So rokushaku means ‘six foot’ bo. There are other lengths and variations including the shorter jo, but normally when you hear someone talking about bo it’s the six foot variety. Please don’t call it a bo staff. That’s some weird name we westerners came up with and it doesn’t really make sense.  It’s like saying staff staff, but just switching languages. If you wanna hang with the cool kobudo kids, learn the long name.

Ok, on to the main event. When it comes to holding the bo, there are two main methods. The first is what you see most frequently, and it entails holding the bo in thirds. Like this: 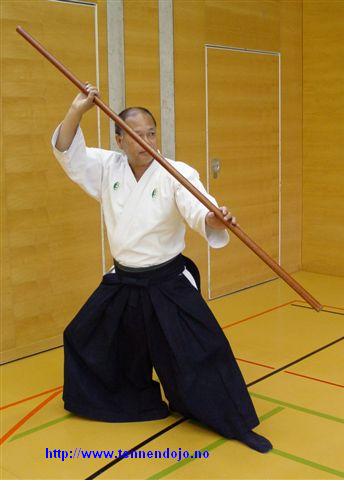 This style is strong because it allows for quick use of both sides of the weapon in rapid succession and rhythym. Unfortunately, using the bo in thirds suffers from a deficiency in length. While you happen to have a six foot weapon, you are only really expanding your reach by about two feet, if that. Also, the power of each strike is lessened by the lack momentum you could generate by swinging the weapon fully.

The next style of handling entails using the full length of the bo whenever possible. Like so: 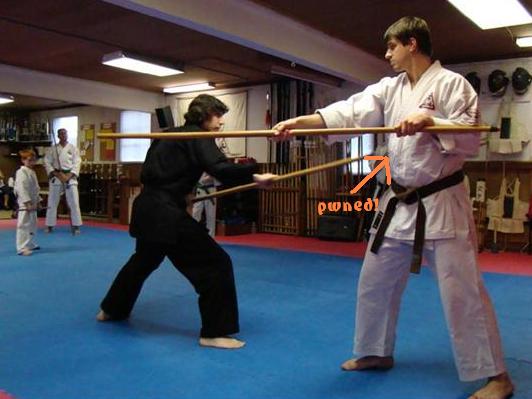 This method capitalizes on the full reach of the weapon. It also benefits from a large momentum build as the force of the weapon expands with the arc of the swing. But, conversely, it is slower in rapid strikes than its counterpart and offers the opponent less confusion as to which end of the bo could be readily used before a hand change.

If you’ve been reading my blog for awhile, you know I’m not going to give you a straight answer. So here we go:

Welcome Back to My Two Friends – Distancing and Timing

Although stylistically most systems focus on one method of holding over the other, they are both applicable depending on distancing, timing, and weapons involved.

Let’s take a look at how distancing plays its part:

Here we have two brave kobudo practitioners. On the left is an individual utilizing the full-length method, and on the right is thirds. When distancing is taken into consideration, the thirds approach is at a distinct disadvantage. Not only is the front wrist extremely vulnerable, but the blue fighter is also susceptible to very quick thrusting attacks (which puts him on the immediate defensive). As you can tell by the circles, the black fighter leaves none of his bo behind, while the blue fighter has a lot of wood still behind him.

When timing gets involved, the scenario can change. Say the blue fighter predicted the intentions of the black fighter (who wants to throw an overhead strike). The blue fighter proceeds to preempt the attack like so: 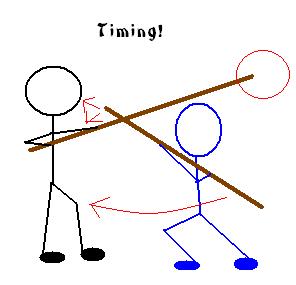 By cutting inside quickly, the blue fighter evades the long, dangerous end of the black fighter’s bo. Now that he is on the inside, he has two ends of his weapon ready and able to strike. Although those strikes might not be as devastating as the initial long overhead, they can do plenty of damage in a short amount of time.

Besides the two big issues of distancing and timing, another factor to consider is weaponry involved in the conflict. For self defense purposes, acquiring a stick of any length is helpful, but you can never be sure what your opponent will have. For example, historically, a bo practitioner would probably have to worry about swords. In that case, it would probably be wiser to use a full length grip so as to evade the brutal cutting edge of the blade. But if for some reason the kobudoka stumbles across someone using two shorter weapons, he might need the quickness of both ends of his staff.

In addition to unknown weapons is unpredictable environment. If a conflict is one-on-one outside in a field, then there needn’t be any concern for space. But if for some reason trouble starts indoors or in a crowd, one would need to consider those factors as well.

Variety is the Spice of Bo Work

Although we discussed the two main hand positions for bo, we didn’t take into account the different kamae, or postures, one can assume. Here are just a few examples: 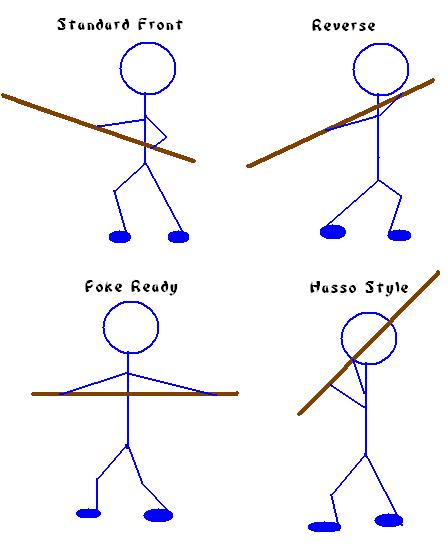 What are the strengths of these positions? The weaknesses? Play around with them and I think you’ll find some great results (and enjoy the journey!)