Hikite – what a great concept for us to sink our teeth into! I’d like to thank Mike Sherman for asking me a question in class that started a meandering rant that ultimately led to this post.

Hikite (te meaning hand, hiki or hikeru meaning drawing in) is a very common aspect of traditional martial arts, especially in karate. Whenever you see karateka performing straight punches as a group, they are sharply snapping one hand out while pulling the other hand back to the belt. 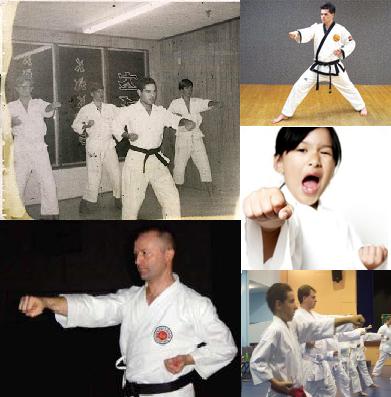 The performance of the hikite itself is fairly consistant across styles at a base level. As the straight punch extends, the withdrawing hand retracts. It is chambered somewhere around the floating ribs. Depending on style you might chamber it a little lower, or even higher tucked up near the armpit.

As opposed to simply cheerleading the usefulness of hikite, I’d like to talk about how I see it develop in martial artists as they grow. In fact, I personally believe that hikite is initially useful, then a hindrance, then useful again.

When You’re A Beginner, Hikite is Useful

When student’s first step foot in a dojo, they rarely know how to punch with maximum efficiency (very rarely).  Most people realize that if they swing their knuckles at someone’s jaw, it’s gonna hurt them…but that’s about it.

The usage of hikite for early students introduces technique into an otherwise chaotic event. By chambering one hand palm up while the other hand is extended, the student can learn to corkscrew his/her punch as it extends outward. By corkscrewing, the puncher can take advantage of the speed and power of a geometric straight line to the target. Furthermore, they can learn how to position a good punch at all distances: palm up closed punch at short range, vertical punch at mid range, and fully extended palm down punch at long range.

By drilling in this fashion, the practitioner can also discover proper bone alignment as they constantly seek to strike with the front two knuckles of the fist. This kind of accuracy and intent is hard to simulate when casually punching a heavy bag with sparring or boxing gloves on.

Hikite Can Become a Hindrance

As students progress, they get more and more comfortable in their karate (or taekwondo, etc). Hikite becomes ingrained in their body and it’s almost more natural to do than not to do it.

Soon hikite pops up everywhere – in kata, in bag drills, and even in self defense routines. Realism begins to get substituted for karate habit. 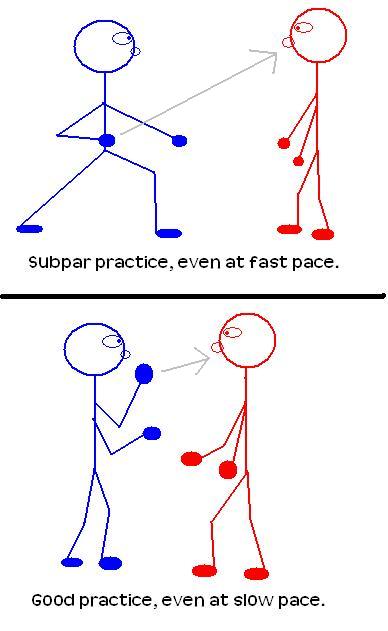 In the picture above we see a fairly common karate habit. In order to keep things “Safe” and orderly, the blue practitioner drops back into a seisan/zenkutsu dachi, performs a gedan barai (lower block), and withdraws his punching hand into hikite. The point of all this is to give the red practitioner plenty of time to learn a technique and practice it.

The problem is, these two karateka will get better at the technique and start going faster. Soon they are going at blitzing speed and thinking that they have everything down pat. Wrong.

Everything about this method of practice is karatefied. Real punches rarely travel in a perfectly straight line like we practice in karate. Furthermore, you rarely have so much time to see it coming. More realistically, an attacker is going to come from a hands up, on guard position (or even worse, a sucker punch position from half a foot away).

If you were to break out of hikite habit and practice in a realistic way, even at an extremely slow pace, you would be better preparing yourself for serious self defense.

Another way hikite becomes a hindrance is during sparring or when returning strikes during self defense. If you are engaged with an opponent, you want to keep your primary defenses (your hands) in front of you as much as possible. Also, you want strike as quickly as possible. Why would you return a hand all the way to your belt, open up your centerline, just to try and send it back out for a punch? Karate people who use hikite in this way will always be at risk of getting their block knocked off by boxing style fighters.

Don’t worry, I’m not a hater. Eventually, after a whole lotta practice, karateka start to become relaxed in their style (hopefully). They stop being slavish to their stances and techniques because they learn the principles behind them. They begin to understand the theories of weight distribution and relaxation-to-tension. They also learn that hikite actually has two components – one going out for a punch, and one withdrawing back in.

The withdrawing aspect is the real secret for making hikite useful again. When engaged in combat, a skilled karateka will make sharp contact with whatever he can – be it hand, leg, head, hair, shirt, etc. As he/she makes that contact (hopefully in a stunning or distracting manner), they will then use that hand to pull the aggressor off balance or open up a vital target on their body. As the hand is withdrawing or manipulating, the other hand will shoot out for a very devastating strike.

Getting this to work with proper timing and force takes a lot of practice. Furthermore, the student needs to learn how to use koshi (hip movement) to weight the technique and cause accelerated unbalancing of the opponent. Ideally the unbalancing and counterattack occur simultaneously (or close to it), allowing the hip to snap in one motion, or snap and then snap back for the strike.

Once you start thinking of a returning hand as a grab, pull, twist, etc it opens up a whole new realm of application possibilities. There are other places in kata that utilize returning hands (think of Nai Hanchi Shodan): 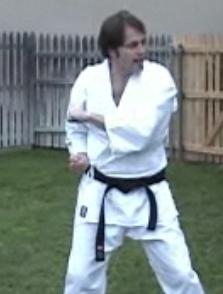 Can’t you imagine closing the distance, striking your way inside your opponent’s guard, grabbing the back of his hair and cupping his chin, then performing a twisting neck break? Or is that just me…

I’ve heard two major theories about hikite that I don’t really buy into. First is that the purpose of hikite is to practice an elbow strike on someone behind you. This seems like one of those unlikely karate scenarios where I need to be punching a guy in front of me while elbowing someone behind me at the same time. Furthermore, by trying to tense both of these impact areas at the same time, I am limiting my ability to use my hips. Rather than striking both people weakly, I’d prefer to hit them in quick succession but put all of my force into each technique.

The other theory is that by accelerating the returning hand you can significantly accelerate the punching hand. I have not found this to be true.  The theory of relaxing the body until point of impact dictates against this because in order to accelerate my returning hand I need to be tense through the arm and shoulder. I prefer to leave that tension out of it and let my fast twich muscles accelerate the punch while my hikite is controlling the opponent’s wrist (or something equivalent). Everything snaps together at the point of impact, causing unbalancing and damage with the strike.