Hey, Show Me Something Karate

Here is a classic problem that every martial artist will run into sooner or later.  If you’ve experienced it already, you probably cringed just reading the title of this post.  If you haven’t…well let’s say you have something to look forward to.

There is a strange biological occurrence that happens in people when they initially find out that you do a martial art.  First, they will give you a quick look up and down.  This is a flash of assessment that basically leads them to think one of two things:

1.  Ohh great, this crazy is gonna punch a hole in my wall or something.

Of course this occurs very quickly and is promptly covered up with a pleasantry, such as: “ohh wow, cool.” or “ohh like Jackie Chan.  Sure, sure.”

You, the martial artist, will find this moment awkward. Luckily these brief exchanges are usually filled with a nervous, complimentary energy.  The person is trying to get on your good side just in case you’re a death touch ninja.

Unfortunately,  it is unlikely to end there.  If the ‘friend’ who has just found out about your training is a bold, forthcoming individual, they will meet you with skepticism very shortly after the pleasantries have subsided.  People with average temperament will wait until the evening has worn on, or even until you’ve hung out a couple of times.  Sooner or later, they will remark:

“Hey!  Show me something karate!”

And they will demand it with this look on their face: 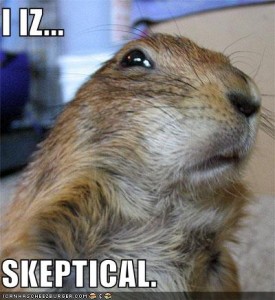 They’ve seen plenty of kung fu movies after all, and they are pretty sure you can’t do the stuff they’ve seen.  Now you’re put into a bad spot.  You’ve probably been taught over and over again that you should never use your abilities unless it is absolutely necessary.  Chauvinistic displays only serve to stroke egos and intimidate innocent people.

But then, on the other hand, you don’t want to be prodded and snickered at every time you see this person.  And in a lot of cases (close friends, family members, coworkers, etc.), you are GOING to be seeing this person again.

I’ll give you the three escape routes that I have developed that coincide with martial arts theory, and leave your assailant satisfied (at least to a degree).

Option 1:  Excuse Yourself From the Situation

This is the most temporary solution, but still works for the short term.  You can excuse yourself from demonstrating your abilities with a legitimate concern.  For example, if you are in the workplace, you can very easily suggest that such activity would be inappropriate for the office and you fear repercussions from the boss.

If you are in your home, or someone else’s home, you can use the excuse of tight quarters for fear of breaking something.  Most people will begrudgingly accept this, although if it’s a nice day, you’ll have to be ready for the ‘let’s just go outside’ suggestion.

A good catch-all excuse is injury.  Cite sore shoulders or a tweaked knee.  If you’ve got a real injury story, launch right into it.  This will probably take the conversation away from karate and into different topics thereafter.

Option 2: Make It A Lesson

This is a pretty good option.  If you’ve got the time, take your questioner’s challenge as a chance to enlighten him/her.  This works especially well if there are a few people around.  Start off by using your questioner as uke for a few self defense techniques.  Do it at a fairly speedy pace at first otherwise you’ll just get more skepticism about “that fancy stuff not actually working.”  After you’ve shown it work for real, gather everyone in a little closer and begin to explain WHY it works.  Most people will be really interested and entertained.

Once everyone is interested, laughing, and feeling surprised by their new found technique, let them pair up with each other and try it out some more, very slowly.  By the end of this impromptu class, people will be happy to know that you know karate and will begin to ask you earnest questions with little sense of incredulity.

Option 3: Everything I Do Is Karate

This is the hardest one to pull off actually, but for veterans of getting asked to do awkward demos, it can be the most fun.  What you do is explain the reality of what karate is all about (sounds simple, right?)

Karate, when practiced with your full heart, seeps into every movement you make.  The way you walk, the way you breath, the way you think, all becomes extensions of your martial art.  Furthermore, your martial art becomes an extension of you.  In the dojo, you’re no longer doing kata by the textbook.  You are doing your kata, even though an impartial observer wouldn’t recognize the significant difference.

When someone asks you to do something karate, you simply respond that everything you do is karate.  Standing in front of them. Talking to them. The distance you are standing away from them and the angle your body has adopted in regards to their centerline.  The timing in the sway of their stance.  The look in their eye.

You’ve assessed it all and needn’t even think about how to respond because the outcome has been predetermined, like surrounding your opponent’s king in chess.

If your questioner is brazen and continues to push the issue, you can prompt him/her to throw any technique they like, and you simply respond with a controlled counter (hint: heads up for a right punch).  This small example of effectiveness + technique will likely quiet any further concerns they might have.

Once again, only use option three if one and two seem out of the question…or if you feel like hearing yourself wax poetic about martial arts philosophy.

Not that I do, of course.