Guest Post: The Birth of Sai from the Mists of Mythology

This is a guest post from one of my primary instructors, Rick Zondlo. Zondlo Sensei is a senior practitioner of Okinawa Kenpo Karate Kobudo and avid student of Japanese Budo and Muso Jikiden Eishin Ryu Swordsmanship. The historical development and live application of weapons is a specialty of his, and I am very pleased to share some of his work here!

In a recent video, I discussed how sai might have arrived on Okinawa and in what ways sai concept could be useful to modern practitioners. In this article, Zondlo Sensei takes us back even further into the annals of history. He digs into not only the Chinese and Japanese developments of the weapon, but the potential Buddhist and Indian influences that could have inspired the original developers of the sai shape and function. He also discusses how mythology could have played a role in the cultural significance of the weapon.

He begins in India…

Consider the Vajra, or Thunderbolt, a sanskrit term which means "the hard or mighty one". The Vajra symbolizes impenetrableness; an indestructible state of Enlightenment of Buddha. The Tibetan version Dorje means "indestructible hardness and brilliance like a diamond", which cannot be cut or broken.

The Vajra or Dorje thunderbolt has open prongs attached to a middle handle on each end and is a symbol of Varjayana Buddhism.

In ancient Hinduism the Vajra as a thunderbolt became the chief weapon of the Vedic 'King of Gods' Indra. According to legend, Indra’s Thunderbolt was made out of the bones of the great Rishi Dadhichi who was decapitated by Indra in sacrifice. Dadhhichi's skull bones gave Indra the most powerful of weapons; by its astounding energy he defeated many enemy demons.

According to Buddhist legend, Buddha Shakyamuni took the Vajra weapon from Indra and forced the destructive, fully open prongs together. Thus forming the peaceful Buddhist scepter with closed prongs.

Now take a look at the Sai. If you had the pleasure of seeing a real Sai it is forged out of Iron and not of steel or some other tubular metal substances used to make it lighter and more cost effective. Classical sai are hefty but forged in a way that is balanced for the owners hand measurements and strength. Also, the prongs or Kagi (Japanese for hook) are forged into the center blade with a tighter curve and not welded on and buffed to a gleaming shine to hide the weld, what a expert in metallurgy or sword smith would call a weak area or flaw in the design. The center blade at the base is a little bit thicker and seems stronger and longer like a lightning rod that will suck down any power from it's tip into it's ensnaring waiting hooks. 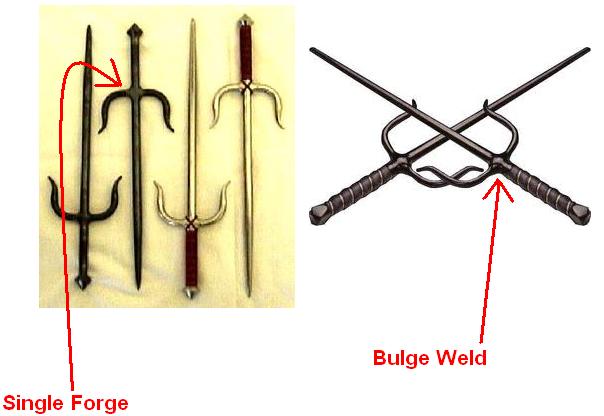 Holding an Iron Sai and training with it is very hard but it holds a remarkably different feeling of balanced power and strength. When one wields it, it seems virtually indestructible, like the Vajra or the Mikkyo Kongo. Some say this is where the design of power and indestructibility in the Sai was developed from. What do you think?

Bohidharma is said to have taught in the famous monastery Shaolin, founded in 495 in the Henan district in the northern province of China. For centuries the Shaolin temple was the center for over 400 varieties of Chinese Boxing. It is understood that here, the word "boxing" has a meaning for many manner of movement, including slow, internal methods like T’ai-Chi (Taiji Quan).

When considering the manji symbol itself, the reverse "swastika" style mon is made up of several elements:

A related symbol to this whirling motion of elements is the Okinawa Tomoe mon.

The Manji Sai has a long history in China and Okinawa. Taira Shinken studied Sai, from 1934 to 1940 under Mabuni Kenwa’s close supervision in Gunma Prefecture.
Allegedly Taira Shinken is credited with the development and invention of the Manji Sai.

Upon going to a Buddhist Temple to pray for the opening of his new dojo in Gunma Prefecture, Taira saw a large Manji at the Temple and was impressed and thought of its shape and saw that there was a weapon hidden in it's form. He saw no matter which way it was thrown that one of the legs or prongs would stick. Upon his return to his Dojo he quickly laid out preparations for it's development and making. He is also credited for it's technical techniques of thrusting and throwing, and the kata form, "Jigen No Sai".

It is interesting to note, the Kanji that Taira uses for the kata "Jigen No Sai" can be translated as "The Foundation of Love and Compassion". Taira’s choice of kanji may be due to the way the form of the Buddhist Manji symbol faces.

Matayoshi Shinko, in his second trip to Manchuria from the demonstration given in Tokyo, went to Shanghai and studied under Kinkoroushi Kingai and learned different Chinese weapons, one which is the "Nunte". The Nunte is the Manji Sai mounted into a Roku Shaku Bo, (or six foot staff). The Form Matayoshi’s style is credited for is just called "Nunte". According to Matayoshi, the name implies "Piercing Hand".

The Mind and Spirit of Weapons Use

What it all comes down to is that most martial arts students who practice weapons only practice what is required by the curriculum of the school or style they are learning, and seldom learn more than the surface of what they see. In each weapon there is a deeper meaning, a hidden devastating power derived from generations of development. Yet there is no way to deny there are Religious, Spiritual, Aesthetic, Ancient beliefs and values that go along with the development and knowledge of the implement.

Understand the context of the time. These are feudal weapons and caring religiously for them kept the warrior or soldier alive on the battle field or in private combat. Today’s modern warrior and soldier might consider his rifle or weapon his life force which can decide his fate.

Yes, there is the “Do” aspect of training with a weapon. One bases his perfection of self through the mind and body by kata, through thoroughness and depth with ones inner self to arrive at a peaceful state of mind, upon which comes tranquility and leads to enlightenment (which is the ultimate purpose in modern training).

But training has its “Yin and Yang” or in Japanese, “ In and Yo”.

Weapons were created to destroy, and to complete the balance of training one must know how to destroy. Budo defines justice and morality based on the Confucian Five Constant Virtues: Benevolence (Jin) righteousness (Gi) propriety (Rei) wisdom (Chi) ,and Trust and Faith (Shin). But Budo is not concerned with morality alone, for if morals are not accompanied by techniques and there is no virtuous man behind that technique, it will invariably produce chaos. The moral self appears when one faces adversity, to bear hardships calmly, to make desperate efforts to persist in training and make correct judgments. It is a system of character building; a blend of ethics of Zen, Confucianism, and Taoism toned by the severity of Bushido. One must know the difference and keep balance and mind in check.

To destroy is a harsh reality. If you ever read some of the passages of “Art of War”, "Hagakure", or "Budoshoshinshu" you'll know that a warrior must make harsh decisions to maintain Peace. This why so many warriors looked for other outlets to calm the mind and keep them from insanity.

I will leave you with one last axiom to think about. If you delve deeply into it, it speaks clearly for all weapons training, sai or otherwise.

Katana wa Bushi no Tamashii!  The Sword is the Soul of the Samurai!