Grandmas Use Self Defense To Fight Rapists

Tom Odula of the Associated Press recently reported on an intriguing trend in Kenyan culture. Apparently more and more women of grandmotherly age are enrolling in self defense classes to protect themselves from rape attacks that are rampant across the country. 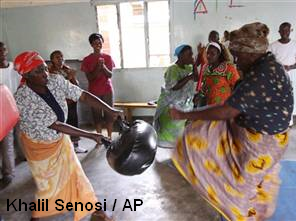 Last year one Nairobi hospital treated 437 rape victims over the age of 60. Another hospital treated 223. These are two samplings that hardly represent all the cases occurring. Much as it is in other countries, many rapes are not reported due to the shame of the event and the belief that nothing can be done about it.

Unfortunately, for elderly women in Kenya, that belief has some truth to it.

According to most Kenyan citizens there is a distressing lack of interest by officials and police in addressing rape reports. When they do chose to pursue them, officers are easily bribed and coerced to look the other way.

Although rape cases are prevalent in all age groups (including children), the number of elderly victims is disproportionately high. Kenyan men believe that sex with an elderly woman can cure AIDS and bring good fortune. Some who are criminals also believe their sins will be cleansed and they will be absolved of guilt from their transgressions.

Matters In Their Own Hands

The situation is bleak. Many grandmothers in Kenya are responsible for their grandchildren as the younger generations are lost to HIV and AIDS. The grandmas realize that in order to preserve their family, they cannot rely on police and external prevention measures.

Sheila Kariuki and her fellow instructors are a rare spark of hope for residents. Kariuki has instituted a self defense program that teaches effective and manageable techniques. Concepts in her course include eye gauging, groin kicks, auditory deterrents, and strikes to the solar plexus. Students like 77-year-old Mary Wanguyi lead the way by training hard and setting strong examples. 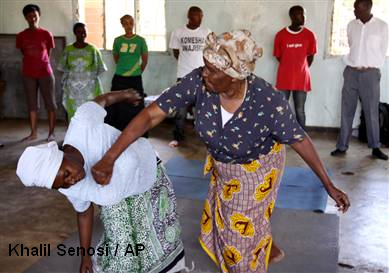 These women understand that being kind or subservient to attackers is not an option when their entire family is depending on their survival.

This story is yet another indicator of the importance martial arts and self defense still have in global culture. Technology continues to advance (especially in developed nations), but crimes like rape are the same as they have been for generations.

Even today, in some environments, martial arts are seen as a man’s game. This is a mindset that needs to be eliminated completely. Strong women like Mary Wanguyi are an inspiring example of taking action and empowering people around her.