Get Rich with Karate

Marge Simpson: “Homer, is this another one of your get rich quick schemes?”

Homer Simpson: “No, no…this scheme is SURE to make us rich.  And quick!”

One of two things is going to happen in this post – either I’m going to reveal some fantastic money making secrets, or I’m going to use ‘getting rich’ as an analogy for training.  You take a guess.

There are all kinds of ‘brilliant’ ideas people create to get rich quick.  The most famous is the pyramid scheme.  These ill-conceived concepts crop up because it can be very arduous building up money.  Heck, I know if I could get $100,000 tomorrow I’d look into it.  It’s also the reason why we play the lottery (and ignore the mathematical improbability of winning).

Sadly, the same is true when it comes to martial arts. Instead of financial pyramid schemes we see promotional pyramid schemes, where groups of ‘experts’ get together and promote themselves to extremely high ranks.  I’m still waiting to hear about the world’s first 20th dan…it’s bound to happen.  More harmful are the schemes where instructors ripoff their student body through inflated monthly fees, testing fees, belt fees, etc etc.

But lets focus more on the training side of things.

At home I’ve got this gigantic glass jar where I keep all of my loose change.  You’ve probably got something similar, yes? 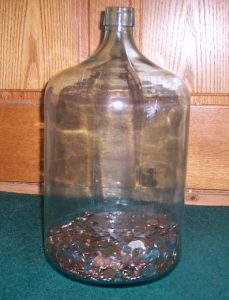 I’ve put a ton of coins in there and have been storing up for years and years.  Despite that, the damn jar looks virtually empty!

It was a great day when I first realized I could no longer see the glass bottom of the jar because I had saved up enough change.  But since then, I’ve gone on autopilot.  I no longer really watch the level of the coins rise because it’s such slow progress.  I know I’m putting money in, but to constantly fret over how much (or how little) is in there would be wasted energy.

Martial arts training can be very similar.  How many workout sessions can you think of where you really thought to yourself, “man – I’ve improved by leaps and bounds today!”  If you’re anything like me, those occasions are few and far between.  Most of the time training seems like a struggle against futility, improving skills so slowly that it barely seems like any progress is being made at all.

At first, I watched my progress in karate like a hawk.  I was really pleased about things I could do and opined about things I couldn’t.  But since then, I’ve gone on autopilot. I’ve simply done my best when either stepping onto the dojo floor or exploring martial arts on my own.  The journey in itself is becoming more and more the goal.

So to you I say keep dropping that change in the jar!  I know it doesn’t seem like a lot.  Whether you’re in top form and toss in fifty cents each time, or if you’re struggling and only have five cents, remember – you’re building the total and one day you’ll take a peek at the jar and wonder where all that money came from!