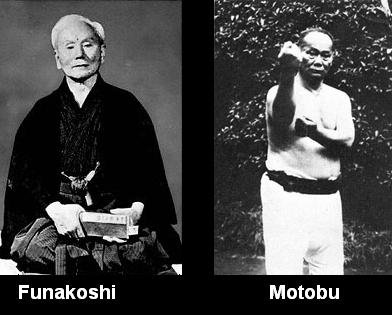 If you stay in the martial arts long enough you’ll find someone who doesn’t like you (I know, I’m a total buzz kill).

It’s true, though. Martial arts affect people in a very profound, fundamental way. Because of that, divergent viewpoints on martial matters can take drastic turns for the worse…quickly.

This isn’t a new phenomenon; I imagine a lot of readers have experienced it. In fact, this kind of conflict goes back about as far as karate was recorded. One of the earliest examples is Sokon Bushi Matsumura referring to Palace Hand (Motobu Udundi) as light and formless, a rather incomplete art.

But the feud I’d like to mention today is perhaps one of the most famous – that between Funakoshi Gichin and Motobu Choki. Both are men of great fame and reputation, but in most ways they were diametric opposites.

Funakoshi Gichin is the founder of what is now called Shotokan Karatedo. He is commonly referred to as the father of Japanese Karate, and rightly so. No one did more to bring karate to the forefront in Japan, and Funakoshi’s efforts to get karate recognized by the Japanese Butokukai were immensely impressive.

Interestingly, among his peers and teachers, Funakoshi was never considered a dominant fighter or technician. He gained his reputation as a gentleman of elegant thought; a man of philosophy, linguistic skill, political acumen, and of course karate talent. As for forms and technique…Funakoshi showed his wisdom there too by associating heavily with one of the great savants in modern history – Mabuni Kenwa. Kenwa’s retention of kata was staggering, and many top tier instructors poured knowledge into him like a basin, hoping that he could help pass along their dying arts.

Mabuni, like Funakoshi, was a refined man. Perhaps that is why they got along so well. But standing on the other side of the aisle, gruff and distant and displeased, was a man known for fearsome fighting prowess. This man was Motobu Choki, Motobu Saru the Monkey, and he would prove to be the yang to Funakoshi’s ever present yin.

The development of these two men was as different as their personalities. From a class standpoint, Motobu was of higher dignity than Funakoshi. Funakoshi’s family possessed some minor status, but Motobu was from one of the grandest lines on Okinawa. It was his family that retained and passed along Ti, the Palace Hand (now known as Motobu Udundi).

Despite this class difference, the growth of the two men would prove quite opposite from what you’d expect. Motobu Choki, being the third born son, had no right to his families prestigious art. He developed a resentment toward that fact, and often attempted to sneak peeks at his older brother’s training. In time Motobu retained techniques and tested them in rougher parts of Naha, whereupon he would engage in fights as frequently as possible. Soon his ego, prowess, and reputation as a ruffian grew.

At first very few teachers would take him as a true student. It took many years of slowly piecing together experience before Motobu Choki began training in earnest underneath instructors like Matsumora Kosaku (Tomari Te), Ankoh Itosu, and Tokumini Peichin. Throughout his growth and maturation, Motobu was always regarded as a fearsome fighter.

On the opposite side was Funakoshi. Funakoshi, while not possessing the remarkable class distinction as possessed by Motobu, was a bright and likable child who befriended the son of Azato Ankoh. Azato was a man of some prestige, both from a karate and governmental standpoint, and he took a liking to young Gichin. From then on, Funakoshi’s experience under quality instructor’s like Azato, Itosu Ankoh, and Higaonna Kanryo would help him develop into a fine karateka.

While pursuing his martial arts career, Funakoshi also improved his education and schooling, ultimately becoming a teacher himself. Like his instructor Ankoh Itosu, Funakoshi was in favor of Japanese reforms and quickly became a go-to resource for the Japanese on this still rather mysterious art of karate.

The differences between Funakoshi and Motobu weren’t just theoretical; they encountered and disliked one another. Motobu considered Funakoshi to be rather soft and superficial in his understanding karate. He observed the changes Funakoshi was making and decried them as moving away from the true core of Okinawan karate that he had seen from the Motobu line and his other instructors.

Funakoshi, on the other hand, looked upon Motobu with disdain due to his constant rough behavior and lack of social grace. Funakoshi did not believe Motobu was a proper representative of karate.

There were a few alleged meetings between Motobu and Funakoshi, one in which Motobu dared Funakoshi to attempt techniques on him. At every turn Motobu would simply throw Funakoshi down and foil his efforts. This of course could be folklore. One thing that certainly did happen was a boxing match between Motobu and a European Boxer (exact country of origin debated). Motobu apparently knocked the big, bruising boxer unconscious even after the man had defeated all comers prior to Motobu. When the event was reported, Funakoshi’s picture was used in Motobu’s place as the karate man of prestige.

You might imagine how that went over with Motobu.

All of these factors and many more contributed to the ongoing feud between two of the top karateka of their time.

In and of itself, this is a very interesting study. But there is another layer. Two men of high importance to the development of Japanese karate not only knew about this feud, but studied under both men anyway.

In Japanese karate circles, these names are well known. Konishi would go on to develop Shindo Jinen Ryu, and Ohtsuka would head Wado Ryu. 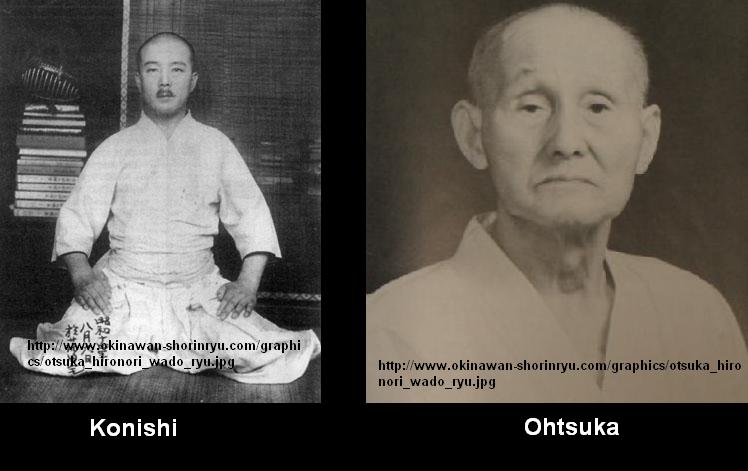 Both of these men spent significant time studying under Funakoshi and helped the spread of karate in Japan. Interestingly, they also facilitated and supported Motobu Choki as he spread his own brand of karate knowledge.

By most accounts, it is stated that Konishi and Ohtsuka wished to take their basics, forms, and physical fitness as developed by Funakoshi and augment them with the feared fighting prowess of Motobu. Motobu had also become one of the most famous practitioners of Naihanchi kata (long considered a cornerstone of Okinawa karate) and was a highly sought after resource for understanding the deeper aspects of that particular system.

We needn’t stretch our imaginations to realize what Funakoshi and Motobu must have thought about the others influence on these two young men. Yet, the culture of martial sharing on Okinawa was strong. The act of Konishi and Ohtsuka seeking out instructors highly skilled in particular areas was not unusual. In fact, you might say it stuck to tradition.

Of course, when put through a Japanese lens these actions were almost unthinkable. The Ryu/ha of Japanese Koryu arts were highly secretive and exclusive, a habit born from centuries of in-fighting and rigid class identification. The idea of going to another instructor was not smiled upon, especially if one of the headmasters happened to hate the other.

Nevertheless, this is what happened with Konishi and Ohtsuka and they both became highly skilled and refined practitioners.

A Hint of Things to Come

These two masters, Funakoshi and Motobu, were not members of each other’s fan club. Yet we see instances of old Okinawan culture poking through – that of sharing and cross training despite frictional differences. At the same time we see the beginnings of Japanese influence as each branch of karate became named, labeled, and sectionalized. Konishi and Ohtsuka lived at an interesting time where their desire to improve their learning began to rub against the trend of modern karate.

This conflict of interest exists today as we see the very same kind of feuds develop and the same impulse to label and confine each style. Perhaps we can use the experiences of these karate greats to better inform our overall perspective on the martial arts.